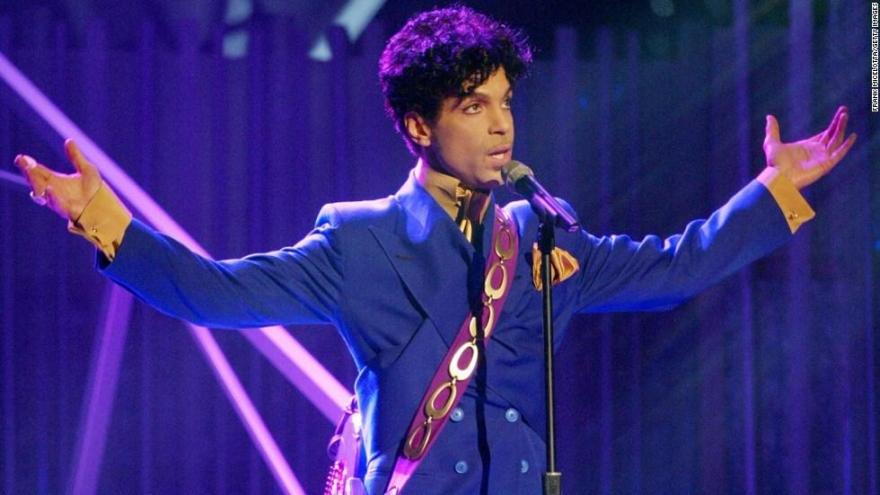 MINNEAPOLIS (AP) — The Latest on the investigation into Prince's death (all times local):

A doctor who treated Prince told the musician's bodyguard about two weeks before his death that he "just doesn't look really well."

The messages show Johnson contacted Schulenberg on April 7, 2016 because Prince wasn't feeling well and wanted fluids. He wrote that Prince was supposed to "fly out today for a show. He might have some other issues I think."

The messages show Schulenberg went to Paisley Park to treat Prince in private and later texted Johnson to wish them a safe trip. Schulenberg said that Prince had no complications from the treatment but "just doesn't look really well. As you have known him longer you can tell that better than me." He offered to perform "some lab testing at a future date."

The messages indicate Schulenberg treated Prince at least one more time before his death.

An assistant to Prince told investigators that he had been unusually quiet and sick with the flu in the days before he was found dead.

Investigative materials released Thursday include audio of a 5-minute interview with Meron Bekure, who told a detective she had been Prince's personal assistant for the last year and a half.

Bekure says that Prince had "been kind of quiet" in recent weeks, and hadn't sent her as many emails throughout the day as he did previously. She says she chalked up his behavior to the flu, which had caused him to recently cancel a show.

Bekure says she last saw Prince a day earlier, when she was going to take him to the doctor for a checkup. She says that Prince told her he would go with his aide Kirk Johnson instead.

Newly released investigative material in the probe into Prince's death include several police videos showing the pop superstar's body on the floor near an elevator inside his Minnesota estate.

The videos show the scene that investigators documented inside Paisley Park after Prince was found dead of a drug overdose.

They do not have any audio but show an investigator with a video camera panning the estate to show the death scene.

Prince is shown on his back next to a sun design in the carpet. His head us on the floor, eyes closed, right hand on his stomach, and left arm on the floor. The walls are decorated with several albums, depictions of Prince and other memorabilia.

At least one Prince fan says she doesn't believe he got justice when a Minnesota prosecutor announced that no criminal charges would be filed in the musician's accidental overdose death two years ago.

Andrus says the announcement was "devastating." She says Prince deserves for the truth to come out, and she doesn't think it will.

Andrus wore a purple sweater and has a tattoo of Prince's love symbol. She plans to participate in a candlelight vigil Friday night outside Paisley Park, which is Prince's former estate. Saturday will mark the second anniversary of his death.

A friend of Prince's who authorities said helped the pop superstar obtain pain medication says he's relieved not to be charged in Prince's death.

That's according to F. Clayton Tyler, an attorney for the Prince friend, Kirk Johnson. Tyler says Thursday's announcement by a state prosecutor that no criminal charges would be filed in Prince's death affirms Johnson's innocence.

Tyler says Johnson continues to deny that he had anything to do with Prince's death.

A search warrant in the case said Johnson asked a doctor to prescribe pain medication for Prince, and the doctor prescribed oxycodone in Johnson's name. Federal authorities said earlier Thursday that the doctor had agreed to pay a civil penalty to resolve the case.

Prince died of a fentanyl overdose, not oxycodone.

As the state of Minnesota ends its investigation into Prince's death without criminal charges, federal authorities say they haven't gotten any credible evidence to support charges either.

Carver County Attorney Mark Metz announced Thursday that investigators had found no evidence to charge anyone in the case. He says Prince thought he was taking Vicodin pills, not the fentanyl that killed him, and there was no evidence anyone around Prince knew the pills were counterfeit.

After Metz's announcement, the U.S. Attorney's Office in Minneapolis issued a statement saying it hasn't received any credible evidence that would support federal criminal charges. The office said it wouldn't comment further.

A law enforcement official close to the investigation told The Associated Press that the federal investigation is now inactive unless new information comes forward. The official spoke on condition of anonymity because the case remains open.

A Minnesota prosecutor says Prince thought he was taking Vicodin when he accidentally overdosed on fentanyl.

Carver County Attorney Mark Metz detailed a two-year investigation that he said found no evidence to warrant criminal charges being filed in the pop superstar's death.

A doctor who was accused of illegally prescribing a pain medication to Prince shortly before he died agreed Thursday to pay a fine as part of a civil settlement. But that pain medication wasn't what killed Prince.

The prosecutor in the Minnesota county where Prince died says he's filing no criminal charges in the musician's death.

The announcement Thursday from Carver County Attorney Mark Metz means the state's investigation into how Prince got the fentanyl that killed him is closed. It came hours after documents revealed a doctor accused of illegally prescribing an opioid for Prince had agreed to pay $30,000 to settle a federal civil violation.

Metz said the evidence shows Prince thought he was taking Vicodin, not fentanyl. He said there's no evidence any person associated with Prince knew he possessed any counterfeit pill containing fentanyl.

Prince was 57 when he was found alone and unresponsive in an elevator at his Paisley Park estate on April 21, 2016.

A newly unsealed federal search warrant says a Minnesota doctor who treated Prince in the weeks before he died expressed concern that the musician was suffering from opiate withdrawal.

The document says Johnson called the doctor on April 14 and asked him to prescribe a pain medication for Prince. Authorities say Schulenberg prescribed oxycodone for Prince, again under Johnson's name. Schulenberg disputes that, but is paying $30,000 to settle a civil violation.

The doctor also saw Prince on April 20 when Prince was reporting feeling antsy. A urinalysis tested positive for opioids.

Prince was found dead of a fentanyl overdose the next day. The doctor is not facing criminal charges and his attorney says he had no role in Prince's death.

An attorney for a Minnesota doctor accused of illegally prescribing an opioid painkiller for Prince a week before the musician died from a fentanyl overdose denies the allegation but says he agreed to pay $30,000 to settle a federal civil violation to avoid the expense and risk of litigation.

Dr. Michael Todd Schulenberg was accused of prescribing oxycodone to Prince and putting it under the name of Prince's bodyguard and close friend, Kirk Johnson, to protect Prince's privacy.

But attorney Amy Conners says in a statement that Schulenberg affirms his previous statement that he did not prescribe opiates to any patient with the intention that they be given to Prince.

She says that after the doctor learned of Prince's addiction, he immediately began working to get him into treatment

A Minnesota doctor accused of illegally prescribing an opioid for Prince a week before the musician died has agreed to pay $30,000 to settle a federal civil claim.

The settlement comes as state prosecutors are planning to announce whether anyone will be charged in the two-year investigation into Prince's death.

Prince died on April 21, 2016, from an accidental overdose of fentanyl, a synthetic opioid. No one has been criminally charged.

But the federal government alleges that Dr. Michael Todd Schulenberg violated the Controlled Substances Act when he wrote a prescription in someone else's name on April 14, 2016.

The settlement released Thursday doesn't name Prince, but search warrants previously released say Schulenberg wrote a prescription for oxycodone in the name of Prince's bodyguard, intending it to go to Prince.

A two-year probe into the overdose death of music superstar Prince is reaching a critical stage as a county prosecutor reveals whether criminal charges will be filed.

Carver County Attorney Mark Metz planned a news conference Thursday morning to give an update on the investigation. It is scheduled for 11:30 a.m.

Prince died April 21, 2016, after being found alone and unresponsive in an elevator at his home and recording studio in a Minneapolis suburb. An autopsy showed he died of an accidental fentanyl overdose.

Prince's death at 57 sparked a national outpouring of grief, as well as a joint county and federal investigation.