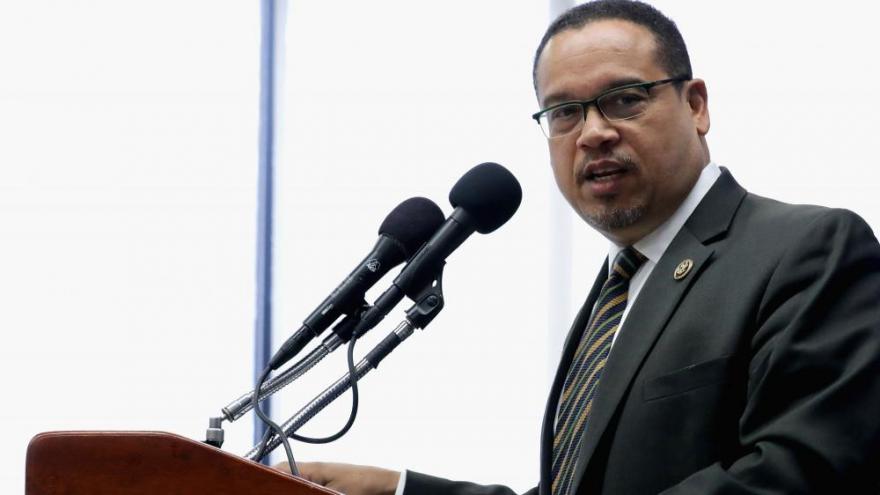 Minnesota Attorney General Keith Ellison, who is taking over the prosecution in George Floyd's death, said Monday he would not rush the investigation into the four police officers on the scene.

(CNN) -- Minnesota Attorney General Keith Ellison, who is taking over the prosecution in George Floyd's death, said Monday night that he will "hold everyone accountable."

"I can assure you we are taking a fresh look," Ellison told CNN's Chris Cuomo. "We plan to hold everyone accountable who is legally culpable," he said, explaining that while he has spent the last 24 hours reviewing evidence, he cannot ethically comment as a prosecutor.

"We are looking very carefully at holding everybody accountable who failed to do their duty and fell below the legal requirements of their position, or did something affirmatively that would be in violation of the law," Ellison said.

"When we are ready, and that won't be long from now, we plan on taking the proper and deliberate action," he said.

He said earlier in the day that he'd move as "quickly and effectively" as possible.

"I need to protect this prosecution," he told CNN. "I am not going to create a situation where people can say this was a rush to judgment."

On Sunday, Minnesota Gov. Tim Walz announced that Ellison, the former congressman who ran for chair of the Democratic National Committee in 2017, will take the lead in the case of Floyd's killing.

The move to appoint Ellison comes amid fiery protests through the US that have demanded justice for Floyd's killing.

Derek Chauvin, the officer seen kneeling on Floyd's neck for nearly nine minutes, was charged on Friday with third-degree murder and second-degree manslaughter. Three other officers on the scene were fired by Chief Medaria Arradondo, who said their silence and inaction made them "complicit" in Floyd's death.

The three officers have not been charged with wrongdoing. Floyd's family has said they want to see Chauvin prosecuted and convicted of murder and want the three other officers involved to also be charged in the case.

Ellison said he could not comment on the investigation, but he praised Arradondo's commentary on their inaction. He said Friday that he has "every expectation" that charges will be filed against the officers in the George Floyd case.

"I absolutely credit the observations of the chief. He has the experience, the know-how, and the integrity to make that comment," Ellison told CNN.

Speaking generally on the law, he said that there are a number of statutes that can apply to people with varying levels of involvement in an alleged crime, including aiding and abetting and duty to render aid.

Walz said he made the decision to name Ellison after talking with the Floyd family. After days of listening to protesters who stormed the streets in protest, Walz said, he felt many don't have faith in the justice system.

"We have to make that process work for people," the governor said in a news conference. "We have to start making sure trust is restored."

"This decision is one that I feel takes us in that direction and the step to start getting the justice for George Floyd," the governor added.

Ellison said he was accepting the lead on the case with "a large degree of humility and a great seriousness."

"I just want to let everyone know that we're going to bring to bear all the resources necessary to achieve justice in this case," Ellison said.