Minneapolis police were involved in a fatal shooting. The chief released bodycam footage 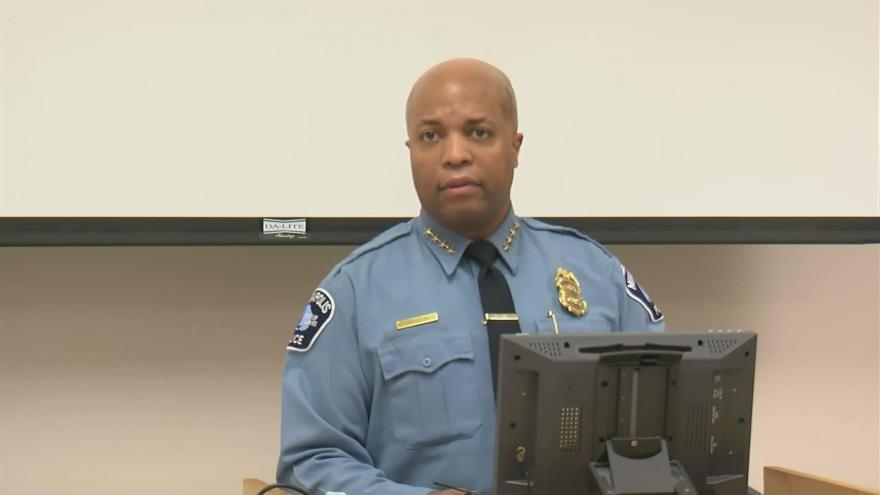 Minneapolis police chief Medaria Arradondo speaks during a news conference about the fatal shooting on Dec. 30, 2020

(CNN) -- Minneapolis police on Thursday released body camera footage of the fatal shooting of a Black man that happened during a traffic stop -- the department's first police-involved shooting since George Floyd died while being pinned down by officers in May.

The shooting Wednesday evening involved a man suspected in a felony who Minneapolis Police Chief Medaria Arradondo said was killed in an exchange of gunfire with officers.

The body camera video showing part of the traffic stop was released by city officials at a news conference. It showed an officer pointing his gun at a white car in the parking lot of a gas station. "Stop your car! Hands up! Hands up!" officers can be heard saying. The car appeared to be boxed in by police vehicles. The car moved back slightly, then lurched forward.

It's difficult to discern who fired the first round. The edited footage did not show the moments leading up to the confrontation or its aftermath.

"When I viewed the video that everyone else is viewing -- and certainly the real-time slow-down version -- it appears the individual inside the vehicle fired his weapon at the officers first," said Arradondo. The chief also said a witness told police the first shot was fired from the car.

The shooting happened about a mile from where Floyd died at the hands of Minneapolis police seven months ago. His death, which was captured on video, sparked national demonstrations calling for racial justice and police accountability.

Protesters assembled near the scene of the shooting Wednesday night. Arradondo said demonstrators could be out on the streets again on New Year's Eve. City officials appealed for calm and vowed transparency in disclosing what happened.

Arradondo said he met with the father of the man who was killed and showed family members and community leaders the body camera video before it was released publicly.

The Hennepin County Medical Examiner late Thursday identified the driver as 23-year-old Dolal Idd, according to a news release. Idd, a Black male, died of multiple gunshot wounds and manner of death is homicide, the release said.

"We need to acknowledge that our city is experiencing a lot of raw emotion right now," Mayor Jacob Frey told reporters Thursday. "And I know that is especially true for our Somali community who has lost a young man."

He added, "A father and a mother are grieving. An entire community is grieving. ... I recognize your pain. I recognize your frustration. It is real and it is valid but, amid this pain, we cannot lose sight of our shared values in this city. Our shared commitment to transparency, too accountability and to justice."

Arradondo said police recovered a weapon from the incident.

Idd was pronounced dead at the scene.

"MPD officers were unharmed and an adult female was a passenger in this subject vehicle was unharmed as well," Arradondo said.

The Minnesota Bureau of Criminal Apprehension was investigating and gathering "critical evidence" from the scene, Arradondo said.

In a statement posted on Facebook Wednesday, Frey said "we know a life has been cut short tonight and that trust between communities of color and law enforcement is fragile."

"Rebuilding that trust will depend on complete transparency," the mayor said. "I am working closely with Chief Arradondo to gather all the facts surrounding what happened tonight and will be relaying that information, in coordination with State partners, to community as quickly as possible. We must all be committed to getting the facts, pursuing justice, and keeping the peace."

"I've been reaching out to community members, faith leaders and others," Arradondo said.

Addressing people who were gathering at the shooting scene, the chief said late Wednesday, "We want to do everything we can to protect everyone's First Amendment rights, to freely assemble, demonstrate, but, I say again, we cannot allow for destructive criminal behavior. Our city has gone through too much."

If the demonstrations evolve to civil unrest, the chief said he "will make the decisions in terms of how we can try to peacefully resolve that."

"But, I want to stress this again, for those who are out there, we respect you practicing your First Amendment rights, but we need to keep our officers safe, we need to keep the community members safe, and I tell you, we need to preserve that crime scene so that the facts can continue to come out as it relates to that."