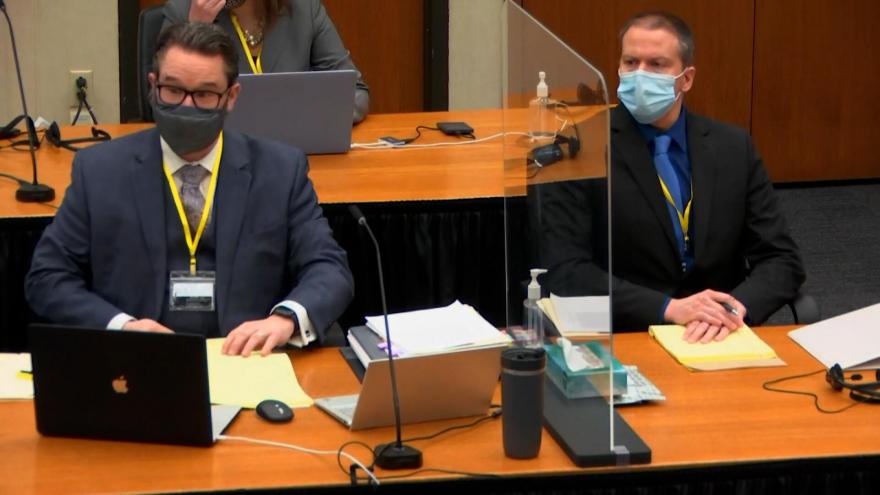 Prosecutors in the second week of Derek Chauvin's trial are set to shift their focus from what happened to George Floyd last May to a closer analysis of what it means legally.

(CNN) -- Minneapolis Police Chief Medaria Arradondo on Monday thoroughly rejected Derek Chauvin's actions and use of force during the arrest of George Floyd last May as contrary to department policy.

"Once Mr. Floyd had stopped resisting, and certainly once he was in distress and trying to verbalize that, that should have stopped," Arradondo testified during Chauvin's criminal trial.

"There is an initial reasonableness in trying to just get him under control in the first few seconds," Arradondo said. "But once there was no longer any resistance and clearly when Mr. Floyd was no longer responsive and even motionless, to continue to apply that level of force to a person proned out, handcuffed behind their back -- that in no way shape or form is anything that is by policy. It is not part of our training, and it is certainly not part of our ethics or our values."

In particular, the chief said Chauvin's kneeling on Floyd for nine minutes and 29 seconds was a violation of the policies around de-escalation, objectively reasonable use of force and requirement to render aid.

Minneapolis policy at the time allowed for some neck restraints, but what Chauvin did was not appropriate, Arradondo said, looking at an image of Chauvin's position on Floyd.

Also on Monday, police Inspector Katie Blackwell, who was in charge of the department's training program last year, testified that officers are taught to use their arms when doing neck restraints.

"I don't know what kind of improvised position this is," she said of Chauvin's kneeling. "That's not what we train."

Blackwell testified Chauvin was regularly instructed in defensive tactics and the proper use of force. Since he trained officers in the field, Chauvin had additional training.

Their testimony cuts at the heart of the defense's argument that Chauvin acted within his police training and employed an appropriate use of force. Earlier on Monday, the doctor who treated Floyd at a Minneapolis hospital testified that he believed Floyd likely died of asphyxia.

The proceedings comes as prosecutors shifted their focus from what happened to Floyd to a closer analysis of what it means legally.

The first week of the trial in Minneapolis centered on a blow-by-blow breakdown of Floyd's last day, including video from a bevy of cellphones, surveillance cameras and police body cameras; harrowing testimony from bystanders who watched Chauvin kneel on Floyd; descriptions from paramedics and police supervisors who responded to the scene; and Chauvin's own statements about what happened.

With that groundwork established, the prosecution is turning to prove Chauvin's actions that day should be considered murder and manslaughter. That will require analysis from medical experts who will explain Floyd's cause of death, as well as testimony from police experts who will say that Chauvin used excessive and unnecessary force.

Some of that use of force analysis has already entered the trial. Last week, Chauvin's direct supervisor said his use of force should have ended earlier, and the department's top homicide detective testified that kneeling on Floyd's neck after he had been handcuffed was "totally unnecessary."

Testimony in the trial began last Monday and is expected to last about a month.

Arradondo began with the Minneapolis Police Department in 1989 as an officer and rose through the ranks over the course of his career. He said he continues to take the department's training every year.

In his testimony, Arradondo described the department's training programs and the core value of treating everyone with "dignity and respect." He said that officers are required to be familiar with policies, including de-escalation and use of force.

"The goal is to resolve the situation as safely as possible, so you want to always have de-escalation layered into those actions of use of force," the chief said.

The use of force must be reasonable the entire time it's applied, Arradondo testified.

"The sanctity of life and the protection of the public shall be the cornerstone of the use of force policy," Arradondo told the court. "It is my firm belief that the one singular incident we will be judged forever on will be our use of force."

Floyd's suspected wrongdoing -- he allegedly used a $20 counterfeit bill -- would probably not rise to the level of severity to use force, Arradondo testified. This type of crime typically does not lead to an arrest because it is neither violent nor a felony, he said.

In cross-examination, Arrandondo acknowledged that officers have to take everything into account when using force, including the actions of bystanders. He also said that an officer using their voice to warn about a potential use of force -- for example, holding a chemical irritant and warning bystanders not to approach -- would be appropriate.

Finally, Arradondo said that one angle from body camera footage shows that Chauvin had his knee on Floyd's shoulder blade for a few moments once paramedics arrived.

Last year, Arradondo fired Chauvin and three other officers involved in Floyd's death, which he said was "murder."

"Mr. George Floyd's tragic death was not due to a lack of training -- the training was there. Chauvin knew what he was doing," Arradondo said in a June 2020 statement.

The Hennepin County Medical Center doctor who treated Floyd and declared him dead last May testified Monday that he believed Floyd likely died of asphyxia.

Dr. Bradford Langenfeld, an emergency medicine physician, said he treated Floyd for about 30 minutes on May 25, 2020, as hospital staff unsuccessfully tried to restart his heart. Based on what paramedics reported and on Floyd's medical condition, Langenfeld said the "more likely possibility" of Floyd's cardiac arrest was hypoxia, or lack of oxygen.

"Doctor, is there another name for death by oxygen deficiency?" prosecuting attorney Jerry Blackwell asked.

On cross-examination, Langenfeld said that hypoxia can be caused by many things, including drugs such as fentanyl, methamphetamine or a combination of both.

The doctor's testimony goes to the prosecution's argument that Chauvin's kneeling was a substantial cause of Floyd's death. Chauvin's attorney, however, has argued that Floyd died due to his drug use and other health issues.

Earlier Monday, Judge Peter Cahill spoke to jurors outside of the view of cameras about an allegation of juror misconduct. He ruled there was not been any misconduct and the jurors were credible.