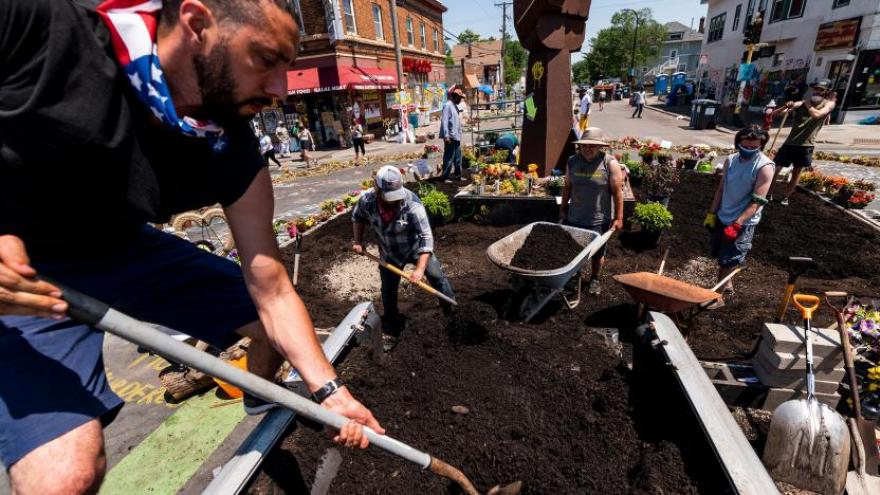 (CNN) -- The city of Minneapolis will send a survey to community members to determine how to best memorialize George Floyd at the intersection where he was killed by police, officials said Friday.

"The killing of George Floyd has forever changed the intersection at 38 and Chicago and has forever changed and reshaped our city's place in history," Mayor Jacob Frey said at a news conference. "The events that happen on May 25, 2020, have forced everyone in our city, across the nation, in the world to come to a global reckoning with our shortcomings on racial injustices and systemic racism."

Frey said the current "barricades placed at the intersection to protect people and public art" are now being "used as a screen for illicit activity and have re-traumatized" the neighborhood where Floyd was killed.

"The intersection has been forever changed," Frey said.

Going forward, the intersection will serve as a memorial to honor the life of George Floyd and acknowledge how his death impacted the city and the world, Frey said.

The goal is to create an area that can be a center for racial healing and justice so that the city and those in the community can move forward.

Interim Director of Public Works Brette Hjelle said his department began engaging the neighborhood in the fall to determine how they wanted to move forward with the intersection while allowing vehicular traffic.

There are two options that both allow for preserving spaces for mourning and reflection, protecting art and restoring access for vehicles.

Community members are being sent a survey to weigh in on the options and determine what works best, Hjelle said.

Those options include putting a sculpture honoring Floyd in the middle of the intersection as a roundabout or on the side, Frey said.

The plan includes the introduction of a barrier that will protect the specific area where he died from vehicular traffic.

Frey said the area, which is currently barricaded, "will not and cannot be an autonomous zone."

The intersection will remain closed to vehicles through the trial of former Officer Derek Chauvin, which starts in March, Frey said. The mayor said he wants people to be able to gather there during the trial.

The city will continue to provide services and enhance them in that area, he said.