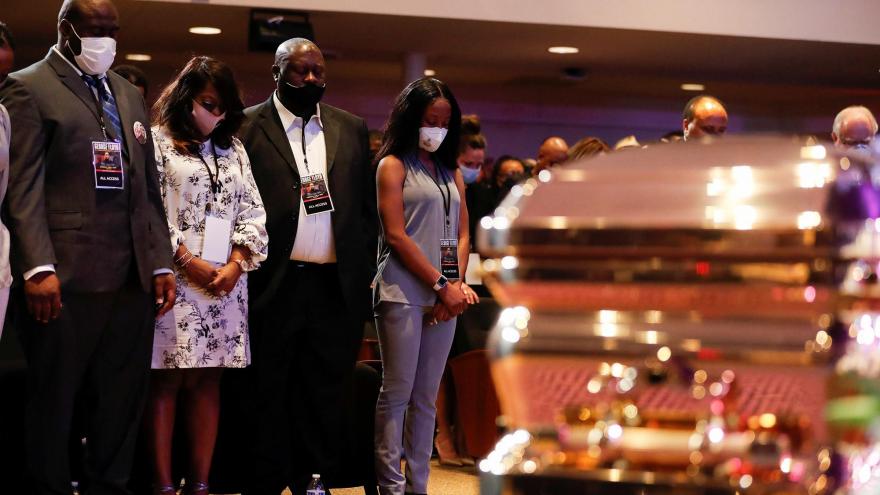 (CNN) -- Police officers in Minneapolis would be banned from using chokeholds under a measure approved Friday by the city.

"We cannot let George Floyd's death be in vain," said Human Rights Commissioner Rebecca Lucero, a day after hundreds of people celebrated Floyd's life in the first of several memorials.

Under the temporary restraining order, which still needs a judge's approval before being enacted, police officers would be banned from using chokeholds, be required to report other officers they see using chokeholds and to intervene in such cases.

Additionally, the Minneapolis police chief must authorize use of crowd control weapons, such as rubber bullets and tear gas, according to the order obtained by CNN.

It also would require timely discipline decisions and allow for civilian audits of bodycam footage.

"This is a moment in time where we can totally change the way our police department operates," Mayor Jacob Frey said.

Frey said there were difficulties in the past to make change like this and "now we can finally get this right."

Velma Korbel, director of civil rights for Minneapolis, said she hopes the "state legislature will be compelled to act, to change the laws that impede the city from making the deep systemic change required, and the community has been demanding for decades."

The measure stems from a civil rights investigation by the Minnesota Department of Human Rights filed earlier this week.

The investigation was intended to identify structural changes and determine whether the department engaged in systemic discriminatory practices towards people of color.

"We are moving quickly to create substantive change," Walz said in a statement. "I'm grateful to City of Minneapolis leadership for taking these critical steps with us to address the systemic inequities that have persisted for generations in our criminal justice system."

"We are going to dramatically rethink how we approach public safety and emergency response," City Council member Jeremiah Ellison tweeted. "It's really past due."

Bender acknowledged calls for cuts in police funding but said some residents in communities of color oppose the move because their neighborhoods are unsafe.

"We need to make urgent change with policing right now," she said. "We need to bring our community along and have conversations with as many Minneapolis residents as possible... The eyes of the world are on Minneapolis, and we can do this."

Suspensions and firings after violent protests

Law enforcement officers in many cities are being reprimanded for their violent tactics against protesters calling for racial justice.

Two officers in Buffalo, New York, were suspended after they allegedly pushed a 75-year-old protester to the ground. The man is hospitalized and in serious condition, authorities said.

An Atlanta officer who was seen on video body slamming a woman on the first night of protests in the city has been placed on administrative assignment, the police department said in a statement Friday.

In Philadelphia, a police inspector is facing several assault charges for allegedly striking a student protester on the head with a metal baton, the city's district attorney's office said.

A police officer in Brooklyn who was seen pushing a woman to the ground on May 29 was suspended without pay and their supervisor has been transferred, NYPD Commissioner Dermot Shea said.

Another officer who was seen pulling down a protester's face mask and spraying pepper spray at him was suspended without pay, Shea added.

From coast to coast, demonstrators continue to call for justice for Floyd, who died after three officers kneeled on him -- one with a knee on his neck for nearly nine minutes -- while he was in police custody.

Hundreds of people marched through the streets of Minneapolis. John Harrington, the Minnesota Commissioner of Public Safety, said the nightly mandatory curfews ended Friday morning and the National Guard was starting to demobilize.

"Every night it got quieter and quieter to the point where we don't see any need for the state to have a curfew. And so there is not going to be any curfew this weekend," Harrington said.

In New York City, Manhattan District Attorney Cy Vance announced that his office will decline to prosecute arrests on charges of unlawful assembly and disorderly conduct linked to the protests.

A massive Black Lives Matter banner was painted on the pavement of the streets of Washington, DC, and in a central axis that leads straight to the White House.

All four officers involved in Floyd's arrest remain in custody.

Their bail was set at $1 million each, or $750,000 under conditions including that they do not work in law enforcement or have contact with the Floyd family.

Kueng's attorney argued for a lower bail because the incident took place on his third shift as a full-fledged police officer and was with his training officer, Derek Chauvin.

Lane had only been on the force for four days at the time of the incident, according to his attorney.

Video showed Chauvin had he knee on Floyd's neck. Lane and Kueng helped restrain Floyd, while Thao stood nearby.

Chauvin is expected to appear in court next week.

"I'm never going to be in comfort until those officers are arrested for first-degree murder, not second-degree, not third-degree," Philonise Floyd said. "That was premeditated, and I want justice."