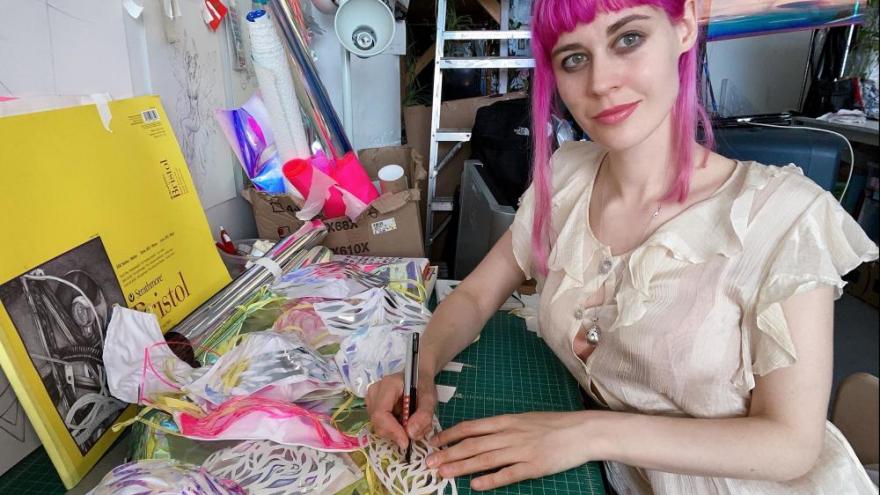 Julia Sinelnikova is frustrated that she can't get in touch with anyone at New York's unemployment agency.

(CNN) -- As a self-employed window washer, Brett Chowaniec is used to not qualifying for jobless benefits when bookings at his business, Pane in the Glass, tumble during economic downturns.

But thanks to Congress' historic expansion of unemployment benefits, the Acampo, California, resident is now collecting nearly $900 a week from the government -- allowing him to cover the land lease and other expenses for his mobile home and to buy groceries.

"I just never seem to fit into that niche that would normally get any assistance," said Chowaniec, 56, who focuses on high-end homes in the San Francisco Bay area. "I would usually be booked right now, but I don't have a single thing lined up."

Yet while the new program has worked for Chowaniec, many others are still waiting for payments, two months after lawmakers passed the $2 trillion coronavirus relief package that made more Americans eligible to file jobless claims.

Some 7.8 million people in 33 states were claiming benefits under the pandemic unemployment assistance program as of May 9, according to Department of Labor data released Thursday. Michigan has the highest number, at 1.6 million residents.

Another 3.3 million Americans have filed initial claims under the pandemic program in the three weeks ending May 23.

All these are in addition to the more than 40 million people -- or 1 in 4 Americans -- who have filed for first-time traditional jobless benefits since stay-at-home orders triggered by the outbreak began in mid-March. The sky-high number of claims has overwhelmed state unemployment agencies, which have had to upgrade their technology and augment their call centers to handle the crush of filers.

Broadening unemployment benefits to the self-employed, gig workers, independent contractors and others affected by the coronavirus required states to reprogram their antiquated technology to accept these new categories of filers, leaving millions of jobless Americans waiting weeks to receive payments.

Adding to the confusion and frustration among the newly eligible workers is that states have different rules for applying, though officials say payments will be retroactive to as early as the week ending April 3.

Some states require people to apply first to the traditional unemployment system, get denied and then reapply under the pandemic program. Others advised residents to wait until the unemployment agencies posted applications for the new program, which most have now done.

"It was a victory when the CARES Act first passed, and we all breathed a sigh of relief," said Rafael Espinal, president of the Freelancers Union, which has 500,000 members nationwide. "But now that we're at the end of May and we're still hearing from our members who are in desperate situations, it's a little disheartening to see the program not work as well as it should."

Many clients of the Unemployment Law Project are still waiting to receive their pandemic benefits, sometimes two months after they lost their jobs, said Behnaz Mansouri, staff attorney at the Seattle-based nonprofit organization. Many are non-native English speakers and did not hold traditional jobs, making it even more challenging for them to navigate the system.

"It's convoluted. It's unclear. It's unprecedented," she said, adding that many people who receive denial letters may not return and apply for the pandemic program.

For Julia Sinelnikova, the most frustrating issue is that she can't get hold of anyone at the New York Department of Labor to find out why she's only gotten three weeks of payments instead of the at least nine weeks she believes she's due. A freelance visual artist in New York City, she needs the additional money to catch up on the rent for her commercial studio.

Initially, Sinelnikova was able to reach someone at the unemployment agency, who helped her with her claim in April. But since then, she has called, left messages on the department's website and tweeted at it, as well as contacted her state representative and community leaders, to no avail.

"It takes up so much of your time to even get to the hold signal. It takes 15 minutes minimum," said Sinelnikova, 30, who plans to reach out to more politicians for help. "It kind of leaves you feeling so defeated, because you can't spend your day doing that."

Matt Spece, who was laid off from his bartending job in Key West, Florida, in mid-March, was not deterred by his initial rejection letter from the state's Department of Economic Opportunity. But his second application remains in pending status, so he's still waiting for at least $3,000 in enhanced federal payments plus his state benefits.

However, Spece is lucky in one sense. He also tends bar in Montauk, New York, in the summer, so he received a letter earlier this month from the state's Department of Labor saying he might be eligible for the pandemic program there. He applied and is already receiving benefits.

The 52-year-old, who had to move in with his brother in Maryland to save money, would much rather work than collect unemployment. But he doesn't see any prospects in the near future, since most restaurants and bars that are open must operate at reduced capacity.

"This is not normal times. I don't have the ability to get a job," Spece said. "Before, if I was ever in a tough situation, I could work in restaurants all over. I'd work two or three jobs."