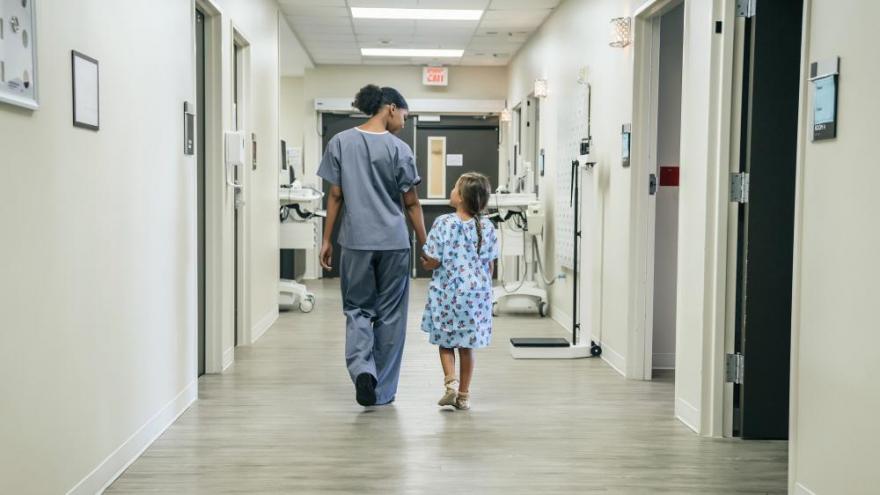 At least 6.7 million children are at risk of losing their coverage and going uninsured for a period once the emergency expires.

(CNN) -- The number of kids covered by Medicaid or the Children's Health Insurance Program has soared to a record40 million during the pandemic, aided by a congressional provision that bars states from disenrolling them during the public health emergency.

However, at least 6.7 million children are at risk of losing that coverage and going uninsured for a period once the emergency expires, according to a new analysis released Thursday by the Georgetown Center for Children and Families. That could happen in July--the Department of Health and Human Services has promised to provide states with 60-days notice.

States will then resume checking families' eligibility for Medicaid, including making sure parents' incomes have not risen above the program's thresholds. That process has been on hold since March 2020, when lawmakers passed a coronavirus relief package that boosted states' federal Medicaid match rates by 6.2 percentage points during the public health emergency. In exchange for that additional aid, states could not remove anyone involuntarily from coverage.

The situation presents a "unique and unprecedented set of public policy circumstances that create a grave risk to the stability of health coverage in the year ahead for millions of children and their families," said Joan Alker, executive director of the Georgetown center and co-author of the report.

Total enrollment in Medicaid and CHIP hit a record 83.6 million in July 2021, the most recent data available, up 11.4% since February 2020. About half of the nation's children are now covered by the two programs.

Some 4.4 million children were uninsured in 2019, according to the latest figures available from the US Census Bureau.

Since they will lose the boost in federal Medicaid matching funds, states will be under great pressure to conduct the eligibility reviews quickly and reduce their enrollment, Alker said.

Not enough attention is being paid to the risks children are facing of becoming uninsured and to transitioning them to other forms of coverage, the analysis said.

"Even children who remain eligible for Medicaid could lose their coverage for procedural reasons, such as the verification request getting lost in the mail or being sent to an old address," said Tricia Brooks, research professor at Georgetown's McCourt School of Public Policy and a co-author of the report.

Even prior to the pandemic, many families were dropped from Medicaid for administrative hurdles or income fluctuations -- though 44% of these children were reenrolled within a year.

Families have experienced a lot of changes since they last had to renew their eligibility two years ago, Alker said. She expects to see a record number of denials for procedural reasons due to the volume of verifications and the push to act on them quickly.

A majority of kids who lose Medicaid because their families' income has increased modestly could probably shift to CHIP, which has higher earnings limits. But some states require additional enrollment steps, which parents may not complete, leaving children uninsured.

Another concern: Many states are understaffed, which could lead to mistakes and make it more difficult for families to get the assistance they need to complete their eligibility verifications or transition to other sources of coverage.

What happens to both children and adults in low-income families will greatly depend on states' renewal procedures, which can vary. Children are more at risk of losing coverage in states that charge premiums in their CHIP programs, that don't provide 12 months of continuous Medicaid coverage for children and that process fewer than half of their renewals using existing data sources.

States can take steps now to minimize problems during the eligibility determinations, including using quarterly wage data and other sources to check enrollees' incomes now, working with insurers to update Medicaid beneficiaries' addresses in state records, conducting outreach campaigns to low-income families and establishing multiple ways to reach out to enrollees when action must be taken to renew coverage.