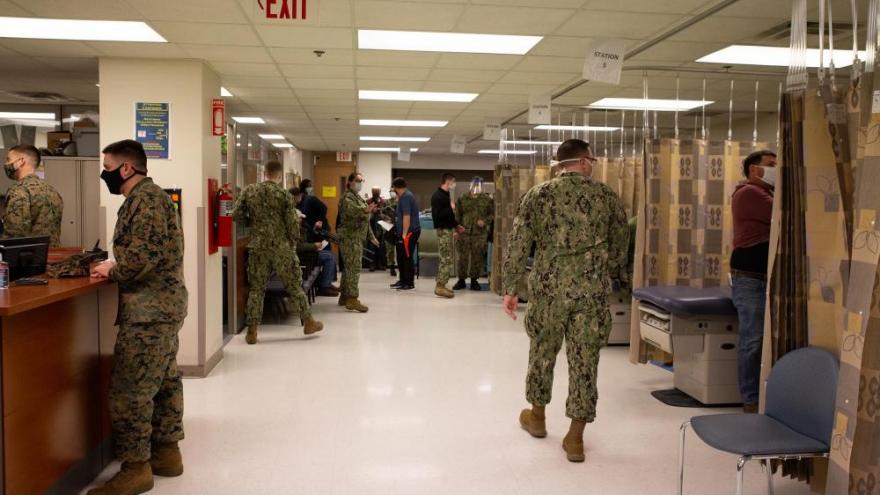 Sen. Ron Johnson on April 22 downplayed the urgency of vaccinating all Americans against Covid-19, putting the controversial Wisconsin Republican at odds with public health guidance aimed at easing the ongoing pandemic.

(CNN) -- As the entire Defense Department becomes eligible for coronavirus vaccines, the military is seeing a surplus of doses in some places, while the rate at which available doses are used steadily declines. Meanwhile, the acceptance rate for the Covid-19 vaccine has "plateaued" at some bases and dropped precipitously in others.

At the beginning of the week, the Pentagon announced that all Defense Department beneficiaries -- including troops, family members and civilians -- would be able to schedule their vaccination appointments, aligning with President Joe Biden's promise of making the vaccines available to every American adult by April 19. But the general population of service members is younger and healthier and may be more hesitant about getting vaccinated, posing a challenge to a military prioritizing the fight against Covid-19.

"We have heard anecdotally that younger people may feel that they're not as vulnerable to Covid and that perhaps the risk of getting vaccinated is higher than getting the disease, which of course we know not to be true," acting Assistant Defense Secretary for Health Affairs Terry Adirim said at a news briefing Wednesday. "So there's all kinds of reasons, and it's similar to what we see in the civilian sector, and this is an area where I think we do a lot better in focusing on that population."

The declination rate of the Marine Corps -- the only branch of the military to publicly release servicewide numbers -- has dropped slightly, from 39% on April 9 to 36% on Friday, according to numbers provided to CNN. But the declination rate for Camp Lejeune in North Carolina, one of the prominent Marine bases, soared in the same time frame, from 57% two weeks ago to 67% now. Of the approximately 37,200 troops who are part of II Marine Expeditionary Force based at Camp Lejeune, 23,900 have opted out of receiving the vaccine.

"Our population is comprised mostly of young and healthy individuals," said Marine Capt. Andrew Wood in a statement, noting that there are a number of reasons troops may decline to receive the vaccine. "Service members who decline one day can change their mind and become vaccinated when next the opportunity presents itself. We fully understand that widespread acceptance of the Covid-19 vaccine provides us with the best means to defeat this pandemic."

Even at some bases with far higher acceptance rates, there is a cause for concern. Fort Bragg, one of the military's largest bases, with about 57,000 military personnel, had a 70% acceptance rate, but a defense official says the number may have "plateaued."

"That might be as high as it gets," the official said.

Unlike private companies, which have implemented incentives for employees to get vaccines, Defense Secretary Lloyd Austin has decided not to institute any sort of incentive process to try to increase vaccination rates. The Covid-19 vaccines currently have only an emergency use authorization from the Food and Drug Administration, and there is no indication that President Joe Biden is considering signing a waiver to make it mandatory, despite urging from some House Democrats.

"Getting the vaccine in and of itself should be an incentive," said Adirim. Because the vaccinations are voluntary, commanders have to be careful not to exert what may be considered undue command influence. Instead, commanders have to focus on informing and educating the military community for beneficiaries to make decisions on their own.

A military health care source at a domestic base with some 40,000 active-duty troops sees bigger problems ahead. This base opened up vaccine appointments to all military beneficiaries two weeks ago, the source said, but almost half the population there has neither declined nor volunteered for the vaccine to date.

"The half who haven't done anything yet are the ones who worry me. I'm worried most of those are going to be declines as well," the source told CNN. "It's a matter of timing. If the vaccine is made mandatory soon enough, it won't be a terrible problem to get those people vaccinated, but if this drags out longer, it remains a public health liability because those people are potential vectors for the disease."

As the military opens up eligibility to all its beneficiaries, surpluses of vaccines are slowly building up, with the military reaching what the director of the Defense Health Agency, Lt. Gen. Ronald Place, called a potential "tipping point" where vaccine hesitancy may limit vaccination efforts instead of the supply of doses.

Surpluses of doses may happen for a variety of reasons, Place said at the Wednesday news briefing, such as vaccine hesitancy in different parts of the country or a facility holding doses for people who don't show up for their second shots of Pfizer or Moderna.

"All of those are variables that we have to work through as we deal with the allocations that we get," Place said.

At the same time, the rate at which the military uses its available doses has dipped over the last few weeks. In late February and early March, that rate -- called the utilization rate -- was nearly 90%. But on Friday, it fell below 80% for the first time, dropping to 79.7%.

"More ends up sitting on the shelf as people aren't coming in," Place said. But the military isn't discarding many doses, Place added, noting that only 0.04% to 0.06% of doses are wasted. "The waste that we've had with this particular vaccine -- it is by far and away less waste than we've had in any other mass vaccination program in our history."