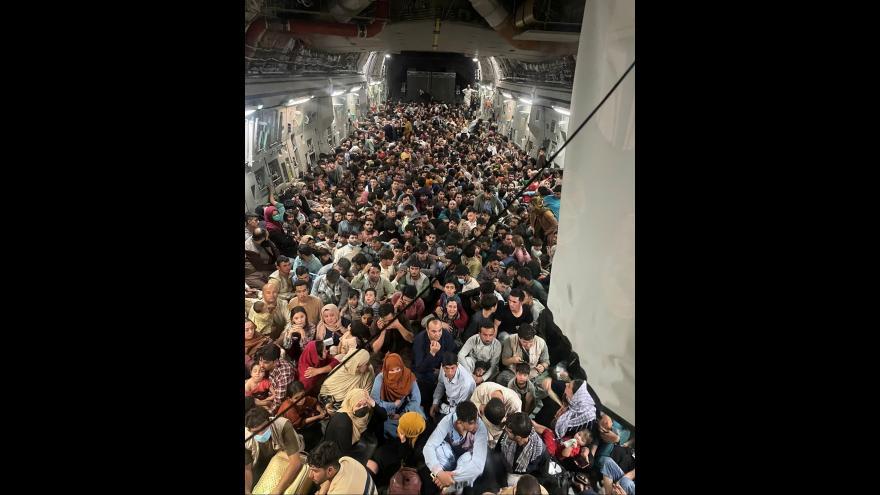 Afghan evacuees crowd the interior of a U.S. Air Force C-17 transport aircraft on its way from Kabul to Qatar on August 15.

(CNN) -- The US military cargo plane whose hold was filled with Afghans evacuating their country captured in a now famous photo flew more than 800 people on board, far more than originally confirmed by the US Air Force, according to the crew who flew the mission.

The C-17 US military cargo plane flew 823 people out of Kabul on the evacuation flight on August 15, the crew said in an interview Friday on CNN's New Day. It was previously believed that the plane carried 640 people.

The photo of Afghans sitting shoulder to shoulder, packed into the hold, went viral after it was published by Defense One, and became instantly symbolic of the desperate need to boost the US efforts.

The number is a record for the Air Force's C-17 Globemaster III, a military plane that can be used to carry both cargo and passengers when needed, Air Force Spokesperson Hope Cronin said. The C-17 has been in operation for almost three decades.

"Our 640 number was a little underestimated, we actually carried 823 out," Technical Sergeant Justin Triola, one of the plane's crew members, said.

A radio transmission of the crew communicating with air traffic control highlights how extraordinary the flight was. When the pilot informed them how many people were on board, the response was "holy hell."

When the C-17 is being used to transport passengers, there are several configurations the plane's crew can use to transport different numbers of people, ranging from 100 to 336 people at a time.

It is always at the discretion of the aircraft commander to determine what they can transport at any given time, Cronin said.

"While there are a range of standard configurations for C-17 passenger loads, this was a dynamic situation that required a dynamic solution," Cronin said.

The previous record of people flown on a C-17 was 670 people that were flown out by the US Air Force after Typhoon Haiyan hit the Philippines in 2013.

Lieutenant Colonel and C-17 Aircraft Commander Eric Kut, who authorized the mission to fly those people to safety, said they are "trained to handle that, to max perform that aircraft."

"We have women and children and people's lives at stake, it's not about capacity, or rules and regulations, it's about the training and the directives that we were able to handle to make sure that we could safely and effectively get that many people out and max perform those efforts," Kut said.

Triola said the people on board the plane were "definitely anxious to get out of the area, and we were happy to accommodate them."

"They were definitely excited once we were airborne," he added.