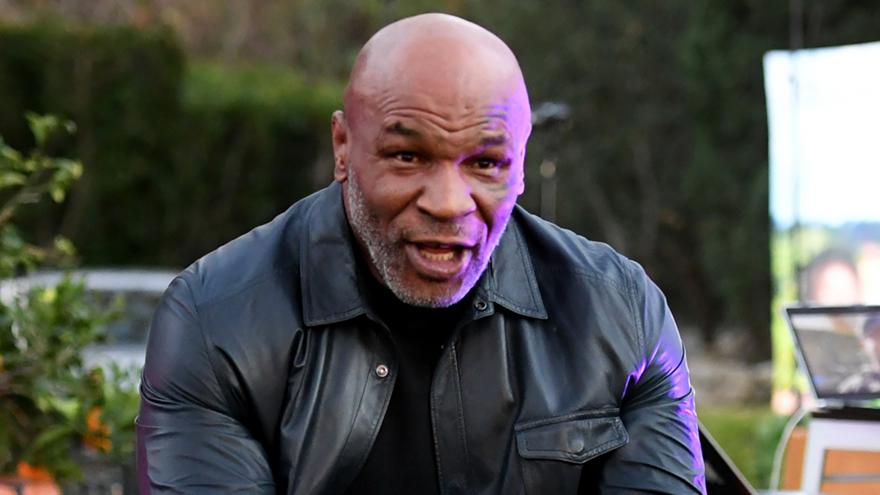 "Unfortunately, Mr. Tyson had an incident on a flight with an aggressive passenger who began harassing him and threw a water bottle at him while he was in his seat," Joann Mignano, a representative for Tyson, said in a statement.

Video obtained by TMZ Sports was taken on a JetBlue plane in San Francisco, according to TMZ. It shows a man repeatedly hitting what appears to be another passenger in the seat behind him.

The video published by TMZ does not show the entirety of the incident. A water bottle is not visible in the footage posted by the outlet.

The video of the blows lasts about 10 seconds and features audio of a person who seems to be trying to defuse the situation, calling "hey Mike, Mike."

On Wednesday evening around 10 p.m. PT, police officers "were dispatched to a physical altercation onboard an airplane located at the Domestic Terminal of the San Francisco International Airport," according to the San Francisco Police Department (SFPD).

Two people believed to be involved in the incident were detained, police said. One person was treated for non-life-threatening injuries, according to a statement from SFPD.

"That subject provided minimal details of the incident and refused to cooperate further with the police investigation," the police said. Both people were released "pending further investigation." SFPD declined to identify either subject.

The police department said it was aware of video that may have captured the altercation, and it has shared the video with the San Mateo County Sheriff's Office.

JetBlue Airways has not responded to CNN's requests for comment.

Tyson was in San Francisco on Wednesday at the 420 Hippie Hill event in Golden Gate Park to promote his cannabis brand, according to the event's website and video posted online.

Cracking down on unruly passengers

The US Federal Aviation Administration (FAA) said Thursday morning that it did not have a report at the time about an unruly passenger incident aboard a JetBlue flight on Wednesday.

"The FAA looks into all airline reports of passenger disturbances," the agency said in a statement to CNN.

Unruly passenger behavior has spiked during the pandemic, with 2021 the worst year on record for reports of bad behavior on planes. A whopping 5,981 reports of unruly passengers were logged by the FAA in 2021.

The agency introduced a "zero tolerance" policy on January 13, 2021, after a sharp rise in unruly passenger incidents in 2020. The FAA said that under the policy, it may issue fines to passengers for unruly behavior instead of warning letters or counseling. And cases can result in criminal investigations and charges.

The FAA said Wednesday that it will make its zero tolerance policy against unruly passengers permanent. That announcement came after the federal mask mandate for public transportation was struck down on Monday. The Justice Department has filed an appeal to that ruling.

The incident aboard the JetBlue flight on Wednesday did not appear to involve masks, which are not currently required. However, mask-related incidents currently make up the majority of reports of unruly passenger behavior.