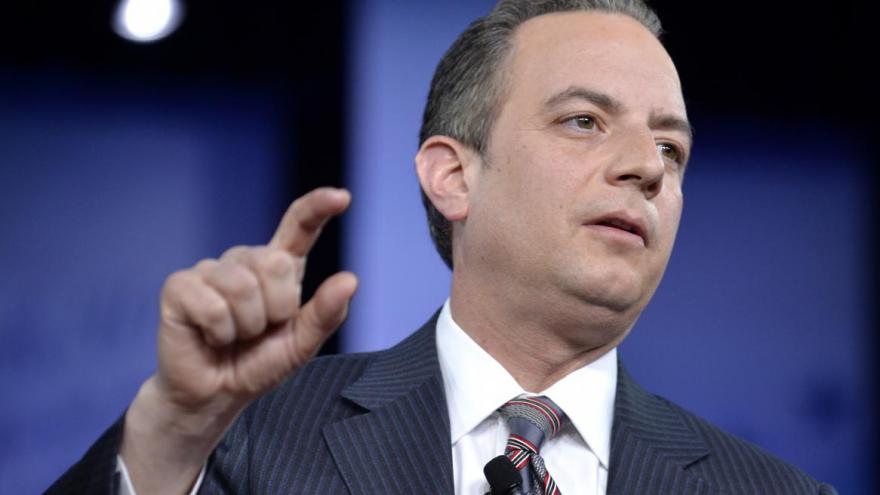 When Secretary of State Mike Pompeo visited Wisconsin on Wednesday, Reince Priebus -- the former chairman of the Republican Party and President Donald Trump's first chief of staff -- traveled with him on the government plane, according to two State Department officials familiar with the trip.

(CNN) -- When Secretary of State Mike Pompeo visited Wisconsin on Wednesday, Reince Priebus -- the former chairman of the Republican Party and President Donald Trump's first chief of staff -- traveled with him on the government plane, according to two State Department officials familiar with the trip.

"Everyone was just stunned," said one State Department official of Priebus joining Pompeo on the official trip, given that it is rare for the secretary to travel with people who are not on his staff and are so obviously connected to partisan politics.

Priebus' presence on the trip doesn't jibe with the State Department saying that Pompeo was going to Wisconsin for "an important policy speech," given that the former GOP party official has no foreign policy expertise and is deeply connected to the Republicans in the state. The department failed to reply to inquiries about whether the trip was connected to the president's reelection bid or the appropriateness of Priebus joining the visit.

Priebus's presence on the trip is likely to raise further questions about the top US diplomat's visit to the battleground state just weeks ahead of the US presidential election, and comes as concerns remain about him seeking to shore up his own republican party connections while being the nation's top diplomat.

Pompeo has taken an unusually active role domestically and spoke at the 2020 Republican National Convention while on official travel in Israel.

Priebus, who was invited by Republican legislators and Pompeo, was listed on the Wisconsin manifest as being part of the Executive Office of the President (EOP), sources told CNN. Priebus no longer works for the Trump administration. He was chair of the Republican Party in Wisconsin from 2007 to 2011, and was enlisted by the party to review the 2018 election results after the Republicans lost races statewide.

Priebus often travels with Trump on Air Force One when he goes to Wisconsin, as he did last month when he visited Kenosha.

Pompeo's battleground visit, where he gave remarks and met with business leaders and lawmakers alongside Priebus, faced criticism from career diplomats in Foggy Bottom who viewed it as a politically motivated trip to benefit Trump in the November elections.

In his speech in Madison, Pompeo downplayed concerns.

"A lot of people were kidding with me before I came out here, indeed some of the political press in Washington was saying, 'What the heck's the secretary going to Wisconsin for?' I know, it's not a country. I get it," he joked.

"But what goes on here, and the work that you all do, is so important to the mission that I have and my team has at the State Department, I feel like it's my responsibility to get out and talk to you about what we're doing, what we're doing on behalf of the people of Wisconsin, the people of America," he said.

His speech focused largely on the threats posed by China.

"Telling the truth about China isn't remotely partisan. It is principled. And it protects our people," he said.

Pompeo took a smaller plane to Wisconsin and did not take a press pool with him on the trip, but he did take one reporter from the New York Post. He also had a few officials from the State Department join him.