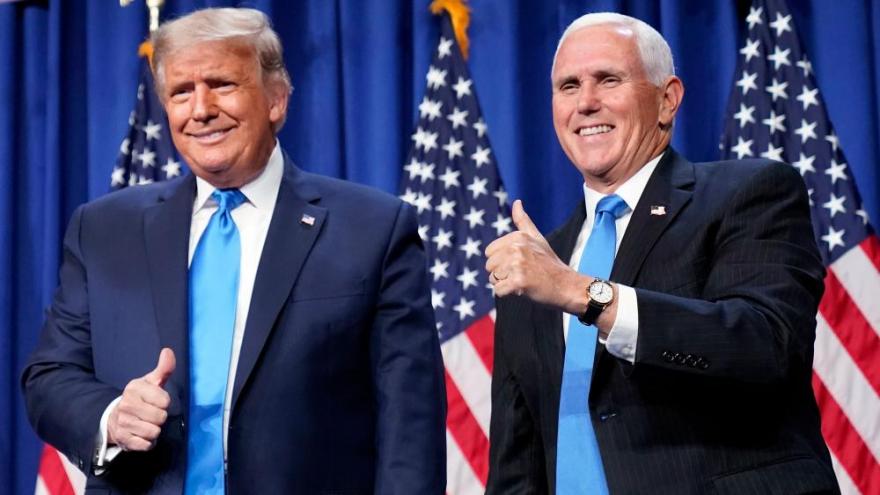 (CNN) -- A dangerous storm tearing toward the Gulf Coast and an extraordinary protest by basketball and baseball stars over the latest police shooting of a Black man are overshadowing Vice President Mike Pence's turn to headline the Republican National Convention.

The confluence of suddenly developing events put pressure on Pence and President Donald Trump to put on a show of leadership at a grave national moment -- on a night lined up as an assault on Democratic nominee Joe Biden.

Pence will step into the leading role Wednesday evening as the party looks to push Trump's pro-police "law and order" message. He is expected to make the case that Biden would lead the country in a dangerously liberal direction as he defends the Trump presidency.

A major theme of both his address and the night as a whole will be support for law enforcement. The theme of the night contrasts sharply with National Basketball Association, Women's National Basketball Association, Major League Baseball and Major League Soccer teams announcing they will not play in their Wednesday night games to protest police violence against Black people.

The Milwaukee Bucks decided against playing Game 5 of their playoff series against the Orlando Magic in protest over the police shooting of Jacob Blake -- a 29-year-old Black man who was shot multiple times in the back as he tried to enter an SUV with his children in the vehicle -- in Kenosha, Wisconsin, which is close to Milwaukee. The two other playoff games scheduled to be played Wednesday night were then also postponed as players decided to join the Bucks in the protest.

It's a historic moment in the sporting world that will stand starkly against the Republican messages of support for police and regular calls for athletes to stick to sports instead of making political statements. Pence is expected to address players kneeling during the National Anthem as a form of protest against police brutality and both Trump and Pence have repeatedly criticized players who have taken a knee as disrespectful to the flag and to American values.

Throughout the spring and summer as Americans filled the streets to protest the death of George Floyd, Pence has tried to reframe the debate as an attack on police. In numerous swing state appearances this summer, he has inaccurately suggested that the former vice president would side with far-left activists who favor defunding the police.

He is expected to renew those criticisms on Biden and the vow that both he and Trump have made to "back the blue" in the midst of protests against police Wednesday during his speech at Fort McHenry, making the Trump campaign's case that the 2020 election is a choice between "freedom and opportunity" and a future of "socialism and decline."

Pence is speaking from Fort McHenry in part because it is a place that embodies America's patriotism and the symbolism of the American flag. The defense of Fort McHenry during the War of 1812 -- when the British attacked the fort during the Battle of Baltimore in September 1814 -- inspired Francis Scott Key to write "The Star-Spangled Banner."

During an interview on Sirius XM, Pence said he would address the "storied history in our National Anthem" in his speech.

A senior Republican official told CNN's Jeff Zeleny that Pence will use his remarks to define the Democratic ticket as "out of touch and dangerous for America."

The former Indiana governor was also expected to address the violence in Wisconsin following Blake's shooting. Two people were killed overnight and a third injured during the third night of protests in Kenosha. Antioch Police Deputy Police Chief Geoffrey Guttschow told CNN that Kyle Rittenhouse, 17, turned himself in on Wednesday at the Antioch police headquarters. Rittenhouse lives in Antioch, which is about 20 miles from Kenosha, where the shooting took place during the protest.

However, a source familiar with the address told CNN just before the night's programming was to get underway that he would not address the violence in Wisconsin. This person said a mention of Wisconsin had never been included in the draft, but a separate source said earlier Wednesday that Pence would reference it during his speech. It's not clear what changed as events shifted dramatically throughout the day.

Social media accounts believed to belong to Rittenhouse portray a young White man who has an affinity for guns, who is pro-police and a supporter of Trump. A Facebook profile and TikTok bio for Rittenhouse both refer to "Blue Lives Matter."

"I'm proud that the overwhelming majority of American police officers are the best of the best and put their lives on the line without hesitation. And good officers need to know that their elected leaders and the department brass have their backs," McHale will say, according to prepared remarks.

"The violence we are seeing in these and other cities isn't happening by chance; it's the direct result of elected leaders refusing to allow law enforcement to protect our communities," he will add.

South Dakota Gov. Kristi Noem turned the tables on Democrats by arguing that they -- and not Trump, who has repeatedly tested constitutional limits on his power -- was a threat to the bedrock principles of American government.

And in remarks that took a highly selective view of protests in response to police brutality, she warned that Democratic-run cities were being "overrun by violent mobs."

Though Biden has explicitly rejected calls to defund the police, Pence previewed the sharp attacks that he will make on the former vice president during a July visit to Wisconsin when he portrayed Biden as a hapless tool of left-wing activists who would cave to the progressive wing of the Democratic Party.

Pence has twisted Biden's words in an interview with activist Ady Barkan when he said he "absolutely" agreed that some police funding should be redirected.

The vice president argued that Biden's comment showed he had "capitulated to the radical left-wing mob" and told voters "the hard truth is: you won't be safe in Joe Biden's America."

Second Lady Karen Pence previewed her own speech during an appearance on "Fox and Friends," in which she said she would focus on the military community and her work connecting military spouses with employment opportunities. She said she would also speak about the work she has done on initiatives to prevent suicide among veterans.

"It'll be an exciting night to highlight the heroes in this great country," she said during the interview.