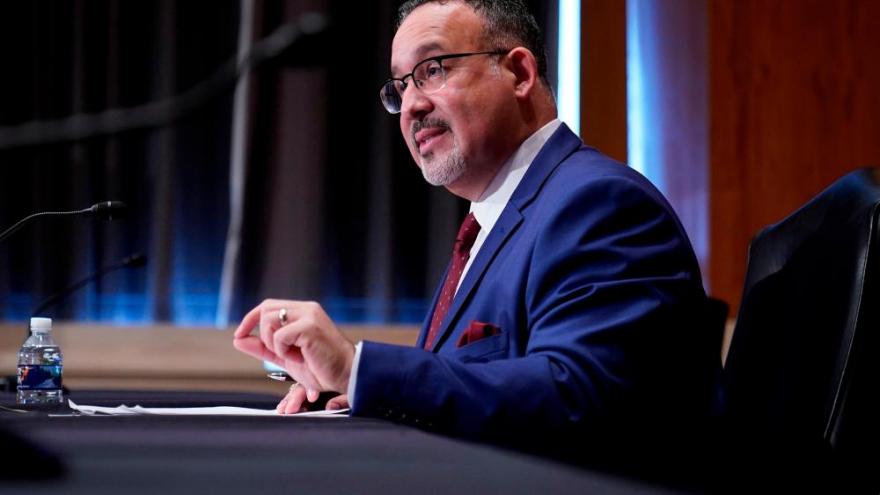 Miguel Cardona is confirmed as secretary of education. Cardona, in this image, speaks during his confirmation hearing on Capitol Hill in Washington, D.C. on February 3.

(CNN) -- The Senate voted 64-33 on Monday to confirm Miguel Cardona, a former public school teacher, as secretary of education.

He faces the monumental task of helping guide school districts to safely provide in-person instruction as teachers' unions in some places across the country are fighting reopening plans.

President Joe Biden has pledged to reopen most schools by May, within his first 100 days in office, and is pushing Congress to approve another $170 billion in education funding.

Cardona, whose family is from Puerto Rico, enjoyed a meteoric rise to the top of Connecticut's public education system. He began his career as fourth-grade teacher in Meriden, in the same district where he attended school. Cardona soon became a principal and then assistant superintendent of the district before being named state commissioner in 2019.

His predecessor, Betsy DeVos, was a controversial nominee from the start when former Vice President Mike Pence had to make a tie-breaking vote to confirm her to the role. DeVos, a staunch school choice and private school advocate, had almost no experience in public education and was often at odds with the teachers' unions.

The unions back Cardona and are pleased with Biden's push to reopen schools but have warned that the 100-day reopening timeline may need to be a goal rather than a fixed target.

At his confirmation hearing last month, Cardona pledged to provide clear reopening guidance, based on science, and said he believes the strategy should call for increased surveillance Covid testing for educators as well as giving them priority to receive the vaccine.

He's already facing pressure from progressives to broadly cancel some student loan debt. Biden has said he supports canceling up to $10,000 per borrower but wants the move to come from Congress. Some lawmakers, including Massachusetts Sen. Elizabeth Warren, say the secretary has the legal power to do so himself.