Migrants arriving at US borders largely barred from humanitarian relief 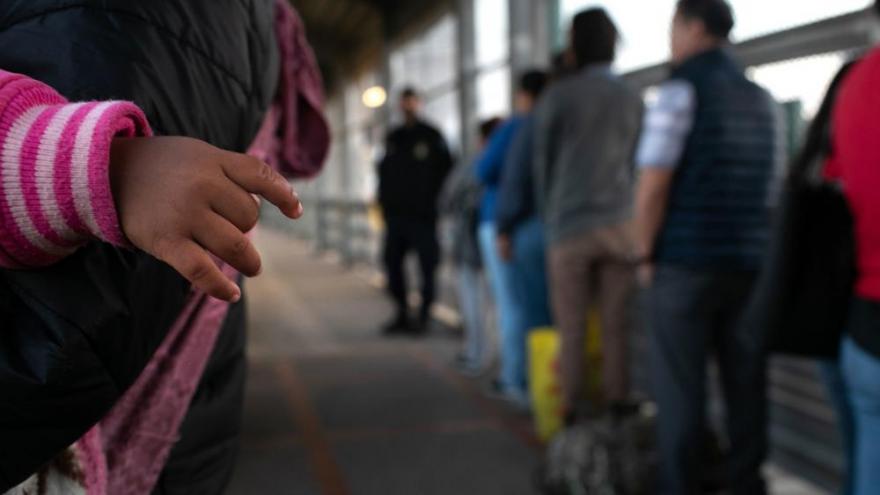 A young Honduran asylum seeker waits with her family on the international bridge from Mexico to the United States on December 09, 2019 next to the border town of Matamoros, Mexico. They were waiting to be taken across by U.S. officials to an immigration court hearing in Brownsville, Texas. More than 1,000 Central American and Mexican asylum seekers have been staying, many for months, in a squalid camp, located next to the bridge in Matamoros, Mexico. Immigrant families seeking asylum are now required by the U.S. government to stay in Mexico as part of the Trump Administration's "Remain in Mexico" process for people legally seeking political asylum in the United States.

(CNN) -- Migrants seeking refuge in the US have been largely barred from humanitarian relief in the wake of stringent border control measures the Trump administration put in place during the coronavirus pandemic.

Only 415 asylum seekers apprehended by US Customs and Border Protection were turned over to the agency responsible for asylum reviews between March 20 and April 30. That's down from around 17,000 cases during the same period last year, according to CBP "credible fear" referral data obtained by CNN. Credible fear interviews are the first step for most asylum claims.

Earlier this week, the administration extended the use of a public health order that allows for the swift removal of migrants apprehended at US borders. The restrictions were first implemented in March.

The dramatic decrease in asylum referrals comes at a time when the administration has implemented numerous policy changes reshaping the nation's immigration system amid the global pandemic.

The US swiftly removed the overwhelming majority of migrants encountered at the US-Mexico border in April as a result of the coronavirus restrictions. However, some migrants continue to be processed under standard immigration proceedings, which has allowed for a small number of asylum claims to move ahead.

These potential asylum referrals stemmed from both people who arrived at land ports of entry and people who crossed the border illegally.

The numbers show that there are "likely a significant number of individuals" being expelled under the public health order who would otherwise be seeking protection in the US, according to Sarah Pierce, a policy analyst for the US Immigration Policy Program at the Migration Policy Institute.

"There is no doubt that coronavirus has created the opening the administration needed to accomplish the goal they have long worked towards -- effectively ending asylum at the southern border," she said.

More than 90% of the nearly 16,000 people apprehended on the southern border in April were expelled from the US under the public health order, according to the most recently available data.

Under the order, the threshold to be exempted from expulsion is a humanitarian claim under the Convention Against Torture, according to a Department of Homeland Security official.

The standard of proof differs for asylum claims, which require a reasonable possibility of persecution in the applicant's home country, and claims under the Convention Against Torture -- an international obligation. To make a claim under the torture convention, an applicant must demonstrate more than a 50% chance they will be subject to torture in their home country.

CNN previously reported that since the order took effect in March through May 13, CBP referred 59 migrants who expressed fear of torture if they were to be returned to their home countries to US Citizenship and Immigration Services, which processes asylum claims.

Some asylum claims are also made later in the process when migrants are in Immigration and Customs Enforcement custody. Those claims and referrals are not reflected in the border data.

A CBP spokesperson told CNN Friday that "during a global pandemic, these flows threaten to create a perfect storm that risk spreading the infection to other migrants, CBP personnel, and the American public at large."

The administration has defended the border measures, saying they have helped promote health and safety during the pandemic.

Acting Homeland Security Secretary Chad Wolf, in a statement earlier this week, called these restrictions "one of the most critical tools" to stem the spread of coronavirus.

Health experts, however, have slammed the use of the public health law, arguing the order appears intended to halt immigration, not serve a public health purpose.