Migrants are taking more risks to reach the US 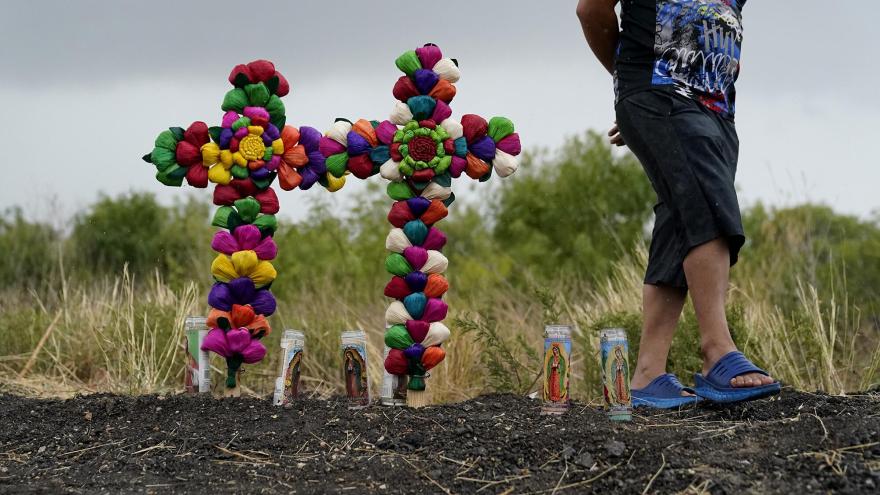 Migrants are forced to take increasingly risky paths to reach the United States, advocates said, citing a mix of border policies that have made it more difficult for migrants to seek refuge in the US.

(CNN) -- After authorities found dozens of migrants dead inside a semi-truck in Texas, US officials swiftly placed the blame on ruthless smugglers.

Politicians seized on the moment to point fingers over border policies.

And immigrant rights advocates warned the deaths are the latest example of a tragic trend they see intensifying.

Migrants are forced to take increasingly risky paths to reach the United States, advocates said, citing a mix of border policies that have made it more difficult for migrants to seek refuge in the US.

"Migrants, refugees, and entire families are using more distant and dangerous routes to come to the United States," says Fernando García, executive director of the Border Network for Human Rights.

"Human beings are dying in rivers, canals, deserts, mountains, and now even in unsafe trailers meant for cargo transportation," he said.

Migrant deaths are on the rise

The discovery this week of at least 40 dead migrants inside a scorching hot truck in San Antonio is the "worst human smuggling event in the US," according to Craig Larrabee, Homeland Security Investigations acting special agent in charge in San Antonio. An official in Bexar County, Texas, said Tuesday afternoon that 51 people have died.

The deaths are the latest additions to a growing toll.

Last year the number of migrants who perished along the US-Mexico border reached their highest level since an international agency began tracking those statistics in 2014. At least 650 people died attempting to cross that border in 2021, according to the International Organization for Migration.

And large numbers of migrants have been found dead inside tractor-trailers before. In 2017, 10 people died and dozens were injured from heat-related conditions after being discovered in a tractor-trailer at a San Antonio Walmart. And in 2003, 18 victims ranging from age 7 to 91 were found dead in the back of a semi-truck with about 100 other people as temperatures soared past 100 degrees, investigators said.

'Why does this keep happening?'

One thing flashed through Doris Meissner's mind when she heard news of the devastating death toll: "This is just horrific, and how can this keep happening?"

"Unfortunately, it's not the first time and it probably won't be the last time," said Meissner, who served as commissioner of the Immigration and Naturalization Service from 1993-2000 and now directs US immigration policy work at the nonpartisan Migration Policy Institute in Washington.

But the particularly large number of deaths this time stands out, she said.

"It's the most extreme example of what we know, which is that enforcement, and border enforcement, cannot get us out of these difficulties of how to manage migration flows," Meissner told CNN. "We need answers beyond enforcement."

Mass migration across the Western Hemisphere has fueled a growing number of arrivals at the US southern border. The coronavirus pandemic exacerbated already-deteriorating conditions in the region, contributing to people moving north.

Since October, there have already been more than one million crossings at the US-Mexico border, though many migrants were turned away under a Trump-era pandemic emergency rule, according to US Customs and Border Protection data.

Meissner said the US has built up enforcement at the border over the years but has failed to update immigration laws to match the country's needs or provide more legal avenues to enter the country.

"The more enforcement that you do, the more you increase the pressures for these kinds of extreme actions to get around the enforcement. ... Smugglers are able to run a very, very lucrative business," she said, "because of the desperation of migrants who are trying to get here."

A report released last year estimated that migrants from the Central American countries of Guatemala, Honduras and El Salvador alone spend $2.2 billion every year trying to reach the United States.

Immigrant rights advocates have been sounding the alarm for years about the effects of increased border enforcement.

Just days before the migrants were found inside the truck, another advocate told CNN he was concerned about dangerous risks migrants are increasingly willing to take to cross the US southern border.

"The crackdown at the border that we've seen now over the past several years ... it's continuing to drive people into more desperate situations where they feel that they need to cross the border in more dangerous places," said Dylan Corbett, executive director of the Hope Border Institute in El Paso, Texas.

That desperation has intensified, Corbett said, as thousands of migrants have been largely blocked from seeking asylum in the United States under a pandemic restriction known as Title 42 that allows border authorities to turn back migrants. And thousands more have been required to wait in Mexico while their immigration cases make their way through US courts under a Trump-era policy informally called "remain in Mexico."

The Biden administration's efforts to roll back both policies have been blocked in court, leaving many migrants -- some who've waited for years to cross -- uncertain about what will happen next.

"I am heartbroken by the tragic loss of life today and am praying for those still fighting for their lives. Far too many lives have been lost as individuals—including families, women, and children—take this dangerous journey," Mayorkas said in a tweet, adding that DHS will work with partners to "hold those responsible for this tragedy accountable."

Immigration and Customs Enforcement's investigative arm detained three people who are "believed to be part of the smuggling conspiracy," the agency said Tuesday. The investigation is ongoing.

Human smugglers, and their exploitation of migrants, had been a focus of the Biden administration prior to Monday's incident. Earlier this month, the Department of Homeland Security said it was launching an "unprecedented" operation to disrupt human smuggling networks amid an ongoing rise of border crossings in recent months.

"This sheds light on how dangerous human smuggling is," Larrabee of HSI San Antonio said in a phone interview with CNN.

"In the past, smuggling organizations were mom and pop," he said. "Now they are organized and tied in with the cartels. So you have a criminal organization who has no regard for the safety of the migrants. They are treated like commodities rather than people."

Texas Gov. Greg Abbott and other Republicans blamed the Biden administration's border policies for the deaths.

Democratic lawmakers accused former President Donald Trump of creating policies that they said put more immigrants in danger, and some slammed Texas and other Republican-led states for their efforts to keep Title 42 in place.

There's no doubt that political rancor around the border is increasing, Meissner said -- and so is the need for political leaders to agree on solutions.

"This is, at the end of the day...an issue that our political structures and leaders need to confront and deal with differently than simply using it as a wedge issue against the other side. That's what's going on now," Meissner said, "just extreme, continuing grandstanding in the face of huge, terrible human tragedy."

Meanwhile, the number of people willing to take great risks to cross the border continues to grow.