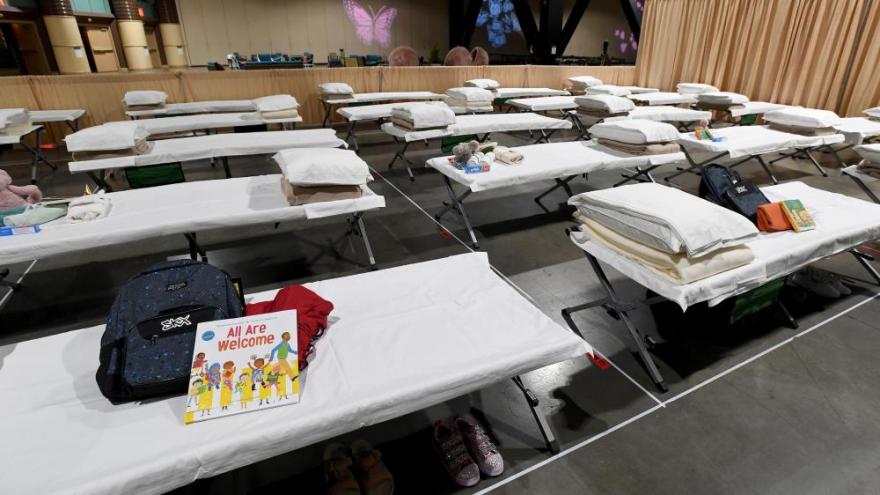 Sleeping quarters set up inside Exhibit Hall B for migrant children are shown during a tour of the Long Beach Convention Center on April 22 in in Long Beach, California. The growing number of unaccompanied migrant children arriving at the US-Mexico border presented an immediate challenge to the Biden administration.

(CNN) -- On one side of the Dallas Convention Center earlier this month, hundreds of teens gathered for a high school volleyball tournament, complete with coaches, spectators and corporate sponsors. The sounds of their cheering were muffled but audible on the other side of the building, in a temporary shelter for hundreds of other children -- all of them unaccompanied minors who recently crossed the border and now face an uncertain future.

The Dallas site is one of more than a dozen temporary shelters the Biden administration frantically established to accommodate the record number of unaccompanied minors now arriving at the US southern border.

Details that have emerged in recent weeks reveal the race behind the scenes to set up the sites, recruit volunteers and staff, and then relocate children to a sponsor, like a parent or relative, in the United States while they continue with their immigration legal proceedings.

Officials leaned on ordinary spaces, like convention centers, in the scramble to find suitable shelter for children, and while the sites are better than the jail-like Border Patrol facilities, they've also had problems.

In one instance, an emergency intake site only had about two dozen staff members to supervise more than 2,000 kids, according to a source familiar with the site, underscoring the rapid pace at which sites were being stood up as officials tried to get resources in place.

The growing number of unaccompanied migrant children arriving at the US-Mexico border -- many of whom were fleeing deteriorating conditions in their home countries -- presented an immediate challenge to the Biden administration, as officials raced to alleviate overcrowding in border facilities.

Inside the White House, some of the internal blame for the situation has fallen on Health and Human Services Secretary Xavier Becerra, who many of Biden's aides believe has failed to approach the matter with urgency. Senior White House officials have repeatedly pressed the health department in meetings to more quickly identify and set up facilities to house migrant children, according to people familiar with the conversations.

At first, the pop-up facilities took the shape of emergency shelters, offering basic necessities, but falling short of providing other services, like education and case management, to the hundreds of children housed at the sites. Under those conditions, the wait to be reunited with family in the United States or transferred to a long-term shelter equipped with more resources took its toll.

"At the beginning, we saw the kids, drawing, playing cards, making soccer balls out of what they could find and keeping themselves busy. There was much less of that this week," said Michelle Saenz-Rodriguez, an immigration attorney based in Dallas who's volunteered at the city's convention center.

The Department of Health and Human Services Department, which is charged with the care of migrant children, has acknowledged the limited nature of these temporary sites, saying in a statement that they are intended to "initially provide potentially lifesaving services for unaccompanied children that are consistent with best practices/standards in emergency response in disasters or other humanitarian situations -- clean and comfortable sleeping quarters, meals, toiletries, laundry, and access to medical services."

Need for staff and beds

In the past month, the department doubled its capacity by adding more than 14,000 emergency intake shelter beds, according to Mark Weber, a HHS spokesperson.

Conditions at emergency intake sites can vary -- and regularly change. Attorneys and advocates say, in some cases, sites have been better equipped over time. But the administration still faces challenges in its attempt to expand bed capacity.

Becerra told a House Appropriations subcommittee this month that providing services to the more than 21,000 unaccompanied children who are now in HHS custody has become "more taxing, more difficult, because the spaces that we're finding are fewer and fewer to be found."

The department has also struggled to get volunteers to centers where minors are being housed, despite begging employees for weeks, an official on internal calls told CNN. Even once they are there, some who opted to volunteer have come home early, this official said.

Senior officials have taken to warning potential volunteers of the stressful working conditions facing those who volunteer, such as scenarios where there are little to no set work spaces and 12-hour standing shifts, according to the source. In one call, officials put it bluntly: volunteering was not a vacation.

HHS has a licensed bed capacity of around 13,500 equipped with a myriad of services, like education and recreation, to accommodate kids who cross the US-Mexico border alone, until they can be relocated to a sponsor, like a parent or relative, in the US. But over the course of the coronavirus pandemic, the department was operating under reduced capacity, catching the incoming Biden administration flat footed when the number of minors crossing the US southern border jumped.

"When we saw the numbers going up, the White House started to convene an inter-agency process...What we focused on, from the very beginning, is we need more beds, we need staffing and services to meet the kids' needs, we need to increase this throughput," said a White House official, adding that the prior administration didn't take precautionary measures to prepare for an influx on the border.

The administration has since taken a series of steps to shore up additional resources and personnel. HHS' Office of Refugee Resettlement posted a job for a Field Program Specialist that's open to "current federal employees from any agency at any grade," and is described as a deployment to "support ORR at facilities for unaccompanied children."

Shortages in staffing have become a point of tension between HHS and the Department of Homeland Security.

"They're struggling to meet the needs of the mission," a Homeland Security official said, adding that there's been tense conversations with the department, as DHS steps in to help with processing and volunteers.

More than 300 personnel from US Citizenship and Immigration Services, an agency under DHS, are helping with case management -- the process of gathering a child's details and helping reunite him/her with a sponsor in the US -- according to HHS.

The Federal Emergency Management Agency, also under DHS, is providing technical assistance to expand bed capacity and support to establish emergency intake sites "to provide immediate decompression" of border facilities, according to an agency spokesperson. As of April 21, 95 FEMA personnel have been deployed to sites in Texas, California, Michigan and Pennsylvania, the spokesperson added.

The emergency intake sites began to pop up in mid-March in an attempt to quickly get children out of Border Patrol facilities as custody numbers reached record highs. In a handful of cases, the administration leaned on spaces in convention centers to set up these sites, including in Dallas, San Diego, San Antonio and Long Beach, California.

In Dallas, HHS is using part of the Kay Bailey Hutchison Convention Center to accommodate up to 2,300 unaccompanied minors. The space looks more like a FEMA emergency shelter, than a traditional HHS shelter, with cots lined up in a large space. Sites, like the one in Dallas, are unprecedented, said Mark Greenberg, a senior fellow at the Migration Policy Institute and a former HHS official.

The newness of these types of sites was clear early on as officials raced to provide services to children and local groups urgently sought volunteers to provide immediate assistance.

Saenz-Rodriguez told CNN the effort is more organized now, compared to when the Dallas intake site opened in mid March.

"Definitely not as chaotic as it was in the beginning, but going on a month in one room has to take its toll on the mental health of those boys," she said. "It's heartbreaking to watch."

One previously announced site in Houston, meanwhile, abruptly transferred girls out of the facility, with no explanation from HHS.

Dean Hoover, an attorney for the National Association of Christian Churches which had been helping shelter children, said they were not consulted about the decision ahead of time. "We don't know why that decision was made frankly. It was made without consultation with NACC. We learned about it shortly before they started bussing women out," he told CNN.

Weber did not elaborate on why the girls staying at the facilities were transferred, adding that "contractual matters are between the government and vendors."

Other sites have kicked off with more resources, like at the Long Beach Convention Center. Lindsay Toczylowski, an attorney who visited the site, described recreational areas equipped with soccer nets and hula hoops and offices set up for attorneys.

"While we appreciate the resources that the government has poured into ensuring that children are transferred out of border patrol facilities, we remain concerned that sufficient resources are not being invested into expanding licensed bed capacity," said Neha Desai, immigration director at the National Center for Youth Law.

"It is concerning that particularly vulnerable populations including young children, indigenous youth, and children with disabilities are being placed in unregulated Emergency Intake Sites rather than facilities licensed by state child welfare authorities," Desai added.

The use of pop-up sites is costly. The Biden administration is spending at least $62 million a week to care for unaccompanied migrant children in HHS custody, according to government data.

One of the main challenges across pop-up sites is the lack of case management, usually baked into the already-established ORR shelters. The consequence: children staying in shelters longer and as a result, a continued need for building up bed capacity.

"They are getting started with little, or nothing, in place of case management. That's a problem because children need the relationship they'd have with a case manager and because the way for children to get to a parent or other sponsor is by having a case manager get that process started," Greenberg said.

Lindsay Gray, an immigration attorney based in Austin and founder of non-profit Vecina, kicked off a family reunification project in conjunction with Project Lifeline to help parents and relatives get paperwork in motion in hopes of cutting down the time to reunify.

"It's very stressful. A lot of sponsors will call and they haven't heard from the child in a number of days and they don't know where they are and they just really want help and reassurances," she added.

The average length of stay is 31 days, according to HHS.

ORR says it's started to kick off the process of identifying parents or relatives who live in the US, while children are in CBP custody. But the need for case managers persists. In a solicitation posted last week, HHS put a call out for case managers to work at the emergency sites.

"We've made, obviously, some pretty enormous progress in reducing the time in custody for children in CBP facilities and opening up these emergency intake centers. But obviously what we want to build towards is making sure that every child is first reunited with family in the United States, but second, as they wait to be reunited, they are in the safest shelter possible," said Andrea Flores, director for Transborder Security at the National Security Council.