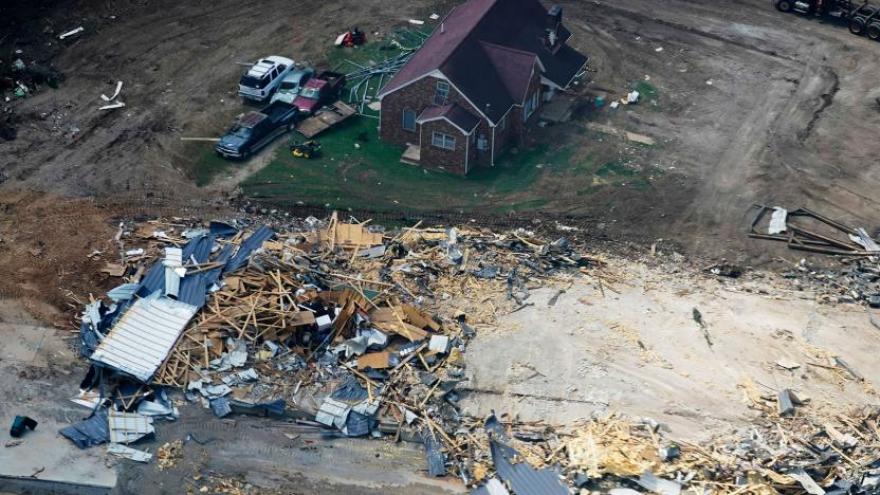 (CNN) -- Middle Tennessee remains deep in recovery mode after last week's deadly and destructive flooding -- and it appears to have been spared from any significant flooding from Tropical Depression Ida.

Ida on Tuesday dropped about 1.5 to 2.5 inches of rain over areas west of Nashville, and rainfall was coming to an end Tuesday evening, with the promise of only light lingering showers in the following hours.

But as the storm trekked closer to the already drenched region earlier in the day, many feared for what more water could mean.

Paula Rumsey's family in Waverly, Tennessee, met with FEMA on Monday to discuss relief from the last storm but also spent part of the day packing up things to evacuate the incoming rains. Last week's storms ferociously washed through her family's neighborhood.

"I'm just very thankful that they're all alive," Rumsey told CNN affiliate WSMV, as her mom, sister and brother packed their belongings and prepared to leave. "They're talking about rain again tonight, and we will not be here."

Christy Brewer, who lives down the street, had two things on her mind -- finding any belongings that hadn't been ruined and getting out of harm's way -- as she passed the rubble pile in front of her gutted home.

Packing the bed of a white pickup truck as she prepared to take her two sons to her mother's house, she told WSMV, "God not again. Just trying to salvage what we can of our lives."

Surveying the mess in her front yard, she grew emotional, telling the station, "This is devastating, to watch your lives go away in dumpsters."

Residents urged to have a plan

Ida's remnants hit the western and central portions of the state late Monday, but the Tennessee Emergency Management Agency had warned that Tuesday could bring "heavy rain and flash flooding ... over the same areas as last weekend's flood emergency."

Residents were urged to make preparations such as weighing the flood risk in their area, creating an evacuation plan and ensuring they have multiple means of receiving weather information, such as the ReadyTN app or a weather radio.

In Waverly, one of the hardest-hit Tennessee cities in the recent flooding, the Humphreys County Emergency Management Agency was simultaneously offering grief counseling and barbecue for those impacted last week, while handing out tarps and bottled water to those bracing for the next deluge.

"Residents are encouraged to cover openings in damaged structures and secure their belongings in preparation for the incoming weather," the county EMA said in a news release.

If there's any silver lining to the latest storm, it's that this week's rainwaters were more forgiving than the last.

"According to the National Weather Service localized flooding will be possible but is not expected to be the magnitude of last week's flooding," Humphreys County EMA spokesperson Grey Collier had said in a news release on Monday.

Just five days ago, the agency announced it was suspending search efforts after identifying 20 people killed as a result of water topping the banks of area waterways and inundating the county. Among them were 7-month-old twins swept out of their father's arms by floodwaters and a 55-year-old woman who livestreamed the flooding on her Facebook page.

"We're sad that our count is now at 20, but we're glad that our families now have the closure that they need to move on," Waverly Police and Fire Chief Grant Gillespie said. "We no longer expect them to find any more victims, but we are still on standby if somebody is reported missing."

Nowhere for the water to go

"We were getting rainfall rates of 3 inches per hour for three hours straight," she said. "It's an unheard of, astronomical type of statistic to see after the fact."

A high risk of flash flooding will continue to exist Wednesday into Thursday morning for parts of the Appalachians, Mid-Atlantic and the Northeast as Ida is forecast to bring 3 to 6 inches of rainfall, with localized higher amounts.

In areas including Hickman, Houston and Dickson counties, which were hammered with high water last week, occasional light showers are forecast for the rest of Tuesday. Like McEwen, Centerville also saw more than 17 inches of rain in one day, and an area outside the city of Dickson registered almost 14 inches.

National Guardsmen equipped with a Blackhawk helicopter and tactical vehicles were activated to assist in rescue efforts. The flooding pulled houses off their foundations and carried away automobiles and other belongings. Almost 300 homes were destroyed. Electricity and cell service were knocked out. Schools were rendered unusable.

"My house fell off the foundation while were still in it, so we had to break the window in the kitchen and crawl out of it and get up on the roof as fast as we could," Casey Hipshire said, explaining that she, her husband and her 8-year-old son had to escape chest-high water that rushed into their McEwen home.

Ida has left similar destruction in Louisiana and Mississippi, washing out roads and leaving more than 1 million people without power. Officials say some in Louisiana, which Ida hit the hardest, may not have electricity for a month.

Compounding matters for those residents and others is a heat index that could soar as high as 107 -- meaning that's how hot it will feel.

The National Weather Service has issued a heat advisory for Wednesday, affecting more than 2 million people in southern Louisiana and Mississippi. Heat is the No. 1 cause of weather-related fatalities in the US, the weather service says.