Middle schoolers send thank you notes to US Capitol workers 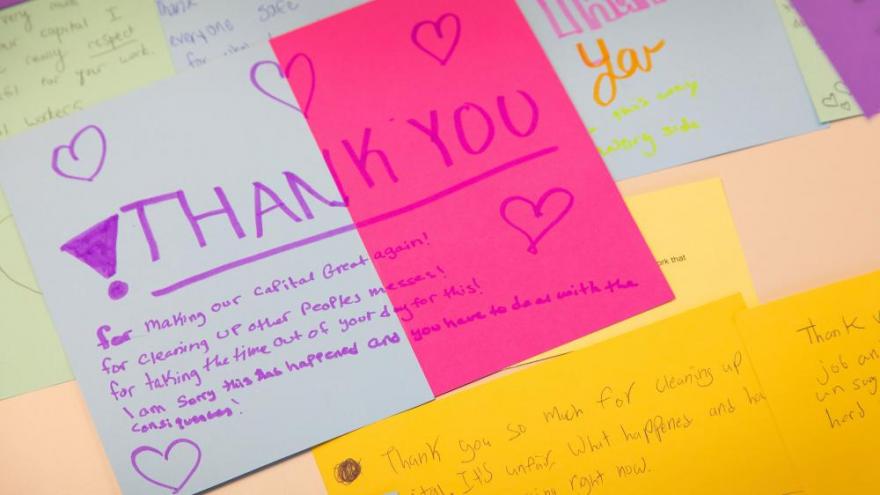 (CNN) -- A group of middle school students in Pennsylvania is sending appreciation notes to workers and officers on Capitol Hill to thank them for their service in the aftermath of the violent attack last week.

The students, who attend Jack M. Barrack Hebrew Academy in Bryn Mawr, asked their teachers if there was anything they could do to help the Capitol officers who protected lawmakers and the maintenance workers who cleaned up in the aftermath of the insurrection on January 6.

The idea came to the students as they reflected on the events and tried to make sense of the headlines and video footage that gripped the nation, said Chris Farrell, director of the middle school.

School administrators told CNN that teachers at the Jewish day school -- which is for students in grades 6-12 -- encouraged students to ask questions and helped guide discussion around the event.

"Middle school students reflected on prayers in our liturgy that are said daily and weekly for our country and our government," Farrell told CNN. "They were encouraged to think about a personal prayer or note of thanks for our government leaders, those protecting the Capitol and our democracy, as well as the workers who had to restore order in the aftermath, as a beginning of a call to action."

The middle schoolers discussed the insurrection through its historical and political context in their history and civics classes. But they also reflected on the crucial moment using Jewish tradition, Farrell said.

"Seeing this kind of racism, bigotry and anti-Semitism on display during the Capitol riots really stirred some of our students up as a call to action to spread kindness and appreciation," Rabbi Judd Levingston, director of Jewish Studies at Barrack, told CNN.

Although students were concerned about seeing photographs of rioters in shirts with messages such as "Camp Auschwitz," Farrell said that they "faced that head on and spoke to how that has to change."

"I am so gratified that in a time of pandemic, protest and what happened at the Capitol, our students (at Barrack) still have faith in working toward justice, gratitude and 'tikkun olam,' helping to repair the world," Farrell added. "There is work still to be done. They recognize and acknowledge that and are willing to take that on."

Democratic Rep. Madeleine Dean, who represents many of the students and their families, will deliver the prayers and notes of gratitude to Capitol officers and maintenance workers at the Capitol building next week, school administrators said.