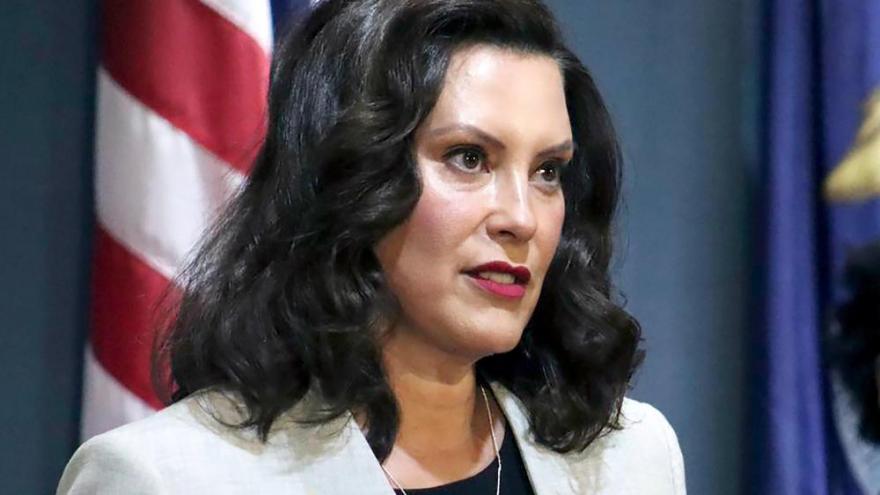 In a June 17, 2020, file photo provided by the Michigan Office of the Governor, Michigan's Democratic Gov. Gretchen Whitmer addresses the state during a speech in Lansing, Mich. Whitmer has extended Michigan's coronavirus emergency through Sept. 4, enabling her to keep in place restrictions designed to curb COVID-19.

(CNN) -- The Michigan Supreme Court on Monday denied Gov. Gretchen Whitmer's request to delay the effect of an opinion that ruled her executive orders on the coronavirus pandemic are unconstitutional.

Ten days ago, the court ruled Whitmer, a Democrat who is a former prosecutor and a first-term governor, had no authority to issue or renew executive orders relating to Covid-19 beyond April 30.

Whitmer filed a motion last Monday, saying more time was needed to "allow for an orderly transition during which some responsive measures can be placed under alternative executive authority and the Governor and Legislature can work to address many other pandemic-related matters that currently fall under executive orders."

In its order Monday, the court wrote that "our decision today ... leaves open many avenues for our Governor and Legislature to work together in a cooperative spirit and constitutional manner to respond to the COVID-19 pandemic."

Whitmer had extended the state's coronavirus emergency declaration by executive order April 30 after the Republican-controlled Legislature advanced a bill that would not have renewed the original declaration.

Whitmer cited the Emergency Management Act of 1976 (EMA) and the Emergency Powers of the Governor Act of 1945 (EPGA) as authority, with two lower courts subsequently dismissing legal challenges to her actions.

Whitmer issued a statement earlier this month after the court ruled she had no authority to issue or renew the executive orders.

"(The) Supreme Court ruling, handed down by a narrow majority of Republican justices, is deeply disappointing, and I vehemently disagree with the court's interpretation of the Michigan Constitution," she said. "Right now, every state and the federal government have some form of declared emergency. With this decision, Michigan will become the sole outlier at a time when the Upper Peninsula is experiencing rates of Covid infection not seen in our state since April."

The Michigan Supreme Court issued its initial opinion at the request of the US District Court for the Western District of Michigan.

The district court had asked the justices "to resolve questions concerning the constitutional and legal authority of the Governor to issue executive orders over the past six months limiting public and private gatherings, closing and imposing restrictions upon certain businesses, and regulating a broad variety of other aspects of the day-to-day lives of our state's citizens in an effort to contain the spread of this contagious and sometimes deadly disease."

It followed a lawsuit filed by three medical centers against Whitmer in federal court challenging her executive order that prohibited non-essential procedures during the pandemic.

The state's health department one week ago issued an emergency order limiting the size of gatherings and requiring face coverings at businesses, schools and government offices, with some exceptions.

It said the authorities of the order were not at issue in the the Supreme Court's decision.

It is in effect through October 30.

Monday, the state Supreme Court also reversed a lower court's judgment in a lawsuit brought by the Legislature, saying "the Emergency Powers of the Governor Act is incompatible with the Constitution of our state, and therefore, executive orders issued under that act are of no continuing legal effect."

Whitmer, who announced a state lockdown in March and lifted it in June, has faced a backlash regarding her closure orders.

In April, protesters carrying firearms went to Michigan's Capitol in Lansing to pressure the governor to issue more relaxed measures.

President Donald Trump has attacked Whitmer in personal terms over her criticism of his handling of the coronavirus pandemic.

In July, Whitmer called for a "national mask-up campaign," saying it was necessary for everyone, even those in the White House, to wear masks to stem the spread of coronavirus.