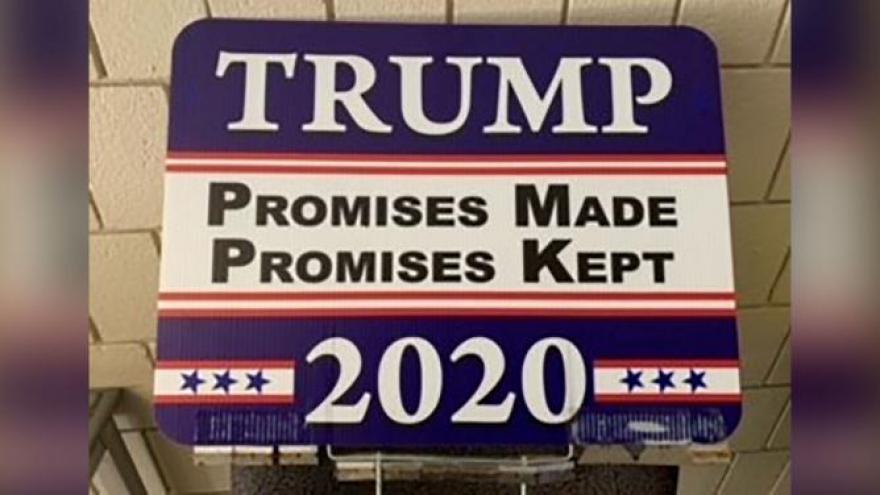 A Commerce Township, Michigan employee moving a Trump/Pence campaign sign from a private lawn had his fingers sliced open by razor blades and required 13 stitches, according to officials.

(CNN) -- A Michigan man had his hand sliced open Wednesday by razor blades found on a Trump-Pence 2020 sign that he was trying to remove.

Authorities had asked the man, who works for Commerce Township, to remove the sign because its placement violated a city ordinance, his boss, Township Supervisor David Scott, told CNN.

The 52-year-old man, who was not named by authorities, had to receive 13 stitches, the sheriff's office said.

The township routinely removes signs that violate its right-of-way ordinance, when they can impede traffic or the ability to see oncoming cars, Scott said. Any yard signs removed -- whether political or for garage sales -- are typically placed next to a dumpster, where they can be retrieved by their owners.

Two campaign signs on were found with razor blades taped to them, according to the Oakland County Sheriff's Office.

The homeowner, who was also not identified by authorities, said the signs had previously been stolen from their property and when they returned from out of town the signs were back in their yard, according to the Sheriff's Office.

Scott said his employee thought he was being "shocked electrically" when he went to touch the sign. Instead, three fingers on his left hand were sliced open by a line of razor blades taped to the campaign sign. The man began "aggressively bleeding" and drove himself to a nearby hospital, Scott said.

Although there was no damage to any nerves or tendons in his fingers, the man required a tourniquet on one of his fingers to stop the bleeding and still only has limited use of his hand at this point, Scott said.

Scott said he didn't understand the need to "boobytrap" a yard sign.

"You can't boobytrap them with the intent to hurt, harm or maim someone," he said. "For whatever reason, (someone felt the need to) protect this like it's the Crown Jewels."

The Oakland County Sheriff's Office said it will continue to investigate the incident.