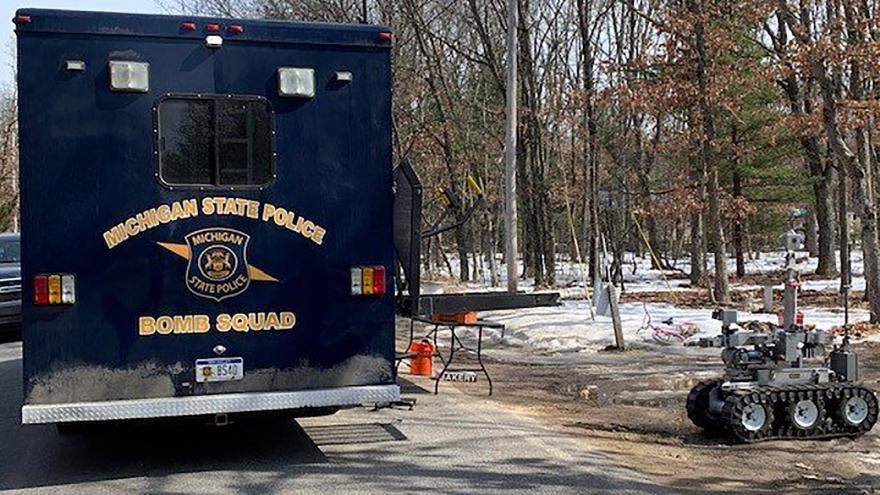 The Michigan State Police Bomb Squad detonated explosive materials at a home Tuesday as part of the investigation into the device that went off in the high school.

(CNN) -- Michigan police charged a 33-year-old man Tuesday after a student brought a homemade explosive device to a high school and accidentally detonated it.

David Robert Daniel Saylor -- who turns 34 on Wednesday -- was arraigned on one count of manufacturing a Molotov cocktail and one count of contributing to the delinquency of a minor, according to a news release from Newaygo County Prosecuting Attorney Worth Stay.

Saylor is also charged as a habitual offender with a second offense notice, the news release said.

"Mr. Saylor is innocent until proven guilty beyond a reasonable doubt," Saylor's attorney, Rick Prysock, said in a statement to CNN on Wednesday. "Neither I nor my client wish to comment further on his pending case."

The explosion happened Monday morning in a classroom at Newaygo High School, about 42 miles north of Grand Rapids, state police said. The 16-year-old boy who brought the explosive device was injured along with four other students, police said.

Based on the initial investigation, it appears the student had no ill intent and did not intend to detonate the device, Michigan State Police spokesperson Michelle Robinson told CNN.

The 16-year-old has been suspended from school, pending expulsion proceedings by the Newaygo Public Schools school board, according to a Wednesday update from Newaygo Police.

The update said Newaygo police apprehended the teenager after the explosion, and because of the injuries he suffered, he was immediately taken to the hospital.

The student was released from the hospital Tuesday evening and placed with family members, police said.

An incident report has been sent to the Newaygo County Prosecutor for review.

The explosion at the high school prompted Michigan State Police troopers to execute a warrant at a Newaygo County residence where "additional explosive materials" were found Monday. Those devices were "safely detonated" by the Michigan State Police Bomb Squad, according to a tweet from state police.

Saylor's next court date is March 18, according to the prosecuting attorney's office.