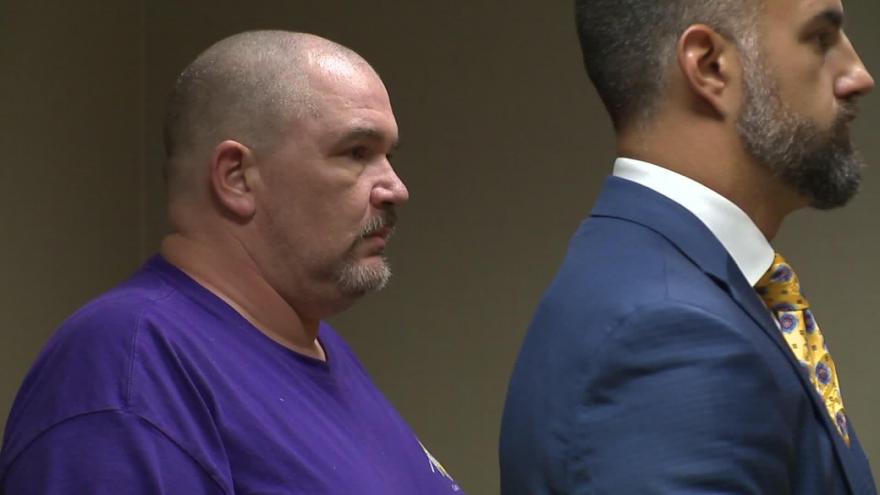 **Embargo: Flint-Saginaw-Bay City, Mich.**Jason Harris has pleaded not guilty to all charges, said his attorney.

(CNN) -- A Michigan man has been arrested and charged with trying to hire someone to kill his wife and then fatally poisoning her cereal with heroin in 2014, authorities said.

Jason T. Harris, 44, was arrested Tuesday and is being charged with three felonies, Genesee County Prosecutor David Leyton announced at a news conference filmed by CNN affiliate WJRT. Leyton said the charges include premeditated first-degree murder and solicitation of murder, both of which can result in a life sentence, and delivery of a controlled substance causing death.

"We believe Jason Harris murdered his wife," Leyton said. "We believe he put heroin into her cereal and milk the night she died after getting it from someone. ..."

Jason Harris' attorney, Nicholas Robinson, told CNN that his client has pleaded not guilty to all charges and is in custody at the Genesee County Jail.

Robinson said Jason Harris has been cooperating with state police and has been mourning his wife since she died.

"We were very surprised and frankly saddened to learn the original determination of accidental overdose has been overturned and that has led to these charges," Robinson said. He declined to respond further to the prosecutor's allegations.

Authorities originally ruled the death of Christina Ann-Thompson Harris was an accidental homicide, Leyton said, but the medical examiner amended the ruling to homicide after a deeper investigation.

At the news conference, Leyton said police were dispatched to a home in Davison, Michigan, on September 29, 2014, where Christina Harris was found dead.

Leyton said Jason Harris's brother and sister went to police a few days later and told them Jason had "made comments in the past about, quote, getting rid of Christina Harris." He said they also felt Jason Harris was seeing other women prior to his wife's death.

During the investigation, according to Leyton, some former coworkers of Jason's told police that Jason Harris asked them what kinds of pills are tasteless and odorless, and that he offered one of them $5,000 to kill his wife. The co-workers said Jason Harris told them he did pay a man $5,000 to kill his wife, but the man was arrested for a parole violation before he could do it, Leyton said.

Leyton said Jason Harris was fired from his job for a "pattern of positive drug testing" and collected a total of $120,000 in life insurance money for his wife's death.

Christina Harris, Leyton said, had recently been promoted to manager of Genesee County's busiest Subway restaurant, where said she was a mentor and friend to her coworkers. She had given birth in May to her second child with her husband and was an "incredibly loving mother," according to Leyton.

He said Christina never tested positive for any drugs at doctors' visits during her pregnancy. Leyton said investigators were able to obtain samples of breast milk that Christina had frozen prior to her death, and found no controlled substances.

Jason's next court appearance is scheduled for September 5.

CORRECTION: A photo caption in an earlier version of this article incorrectly reported Jason Harris' plea. He pleaded not guilty.