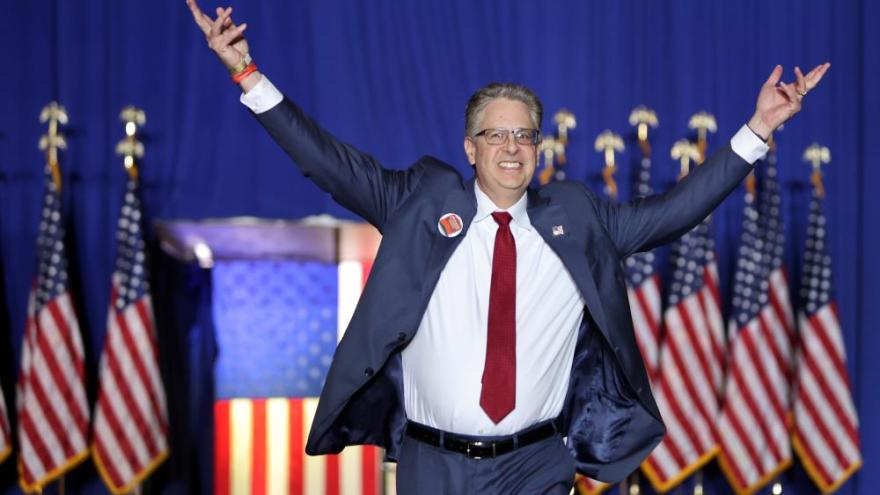 Matthew DePerno, who is running for the Michigan Republican party's nomination for state attorney general, speaks at a rally hosted by former President Donald Trump on April 2 near Washington, Michigan.

(CNN) -- The Michigan Republican Party on Saturday nominated two candidates for statewide office who have denied the results of the 2020 presidential election and would have oversight of the state's elections if they win in November.

The two candidates, who both have former President Donald Trump's backing, had previously earned the party's endorsement at a convention in April. Michigan Republicans also picked former state Rep. Shane Hernandez as their nominee for lieutenant governor on a ticket with gubernatorial nominee Tudor Dixon to challenge Democratic Gov. Gretchen Whitmer and Lt. Gov. Garlin Gilchrist, the party announced in a statement.

Karamo will next face Democratic incumbent Secretary of State Jocelyn Benson while DePerno will take on Democratic Attorney General Dana Nessel in November.

If they win their races, Karamo would serve as the Michigan's election chief while DePerno would be the top legal official -- two key roles overseeing elections in the pivotal swing state, just as Trump is preparing for an expected 2024 comeback. Other Trump-backed candidates who have made false claims about the 2020 election results have also been nominated for key offices in swing states such as Arizona, Nevada and Pennsylvania.

Karamo, a community college professor and right-wing commentator, has falsely claimed that Trump won Michigan in 2020 and alleged that she witnessed fraud as a poll challenger during Michigan's count of absentee voter ballots.

DePerno is a Kalamazoo-based lawyer who led a failed lawsuit challenging the 2020 election results in Antrim County, Michigan.

A state Republican-led investigation in Michigan concluded last year that there was "no evidence of widespread or systematic fraud" in the state's 2020 election.

Nessel earlier this month called for a special prosecutor to investigate DePerno after finding evidence linking him to a potentially criminal plot last year to seize and tamper with voting machines used in the 2020 election. DePerno has denied the allegations and called Nessel's claims an "erroneous attack based on political prosecution."