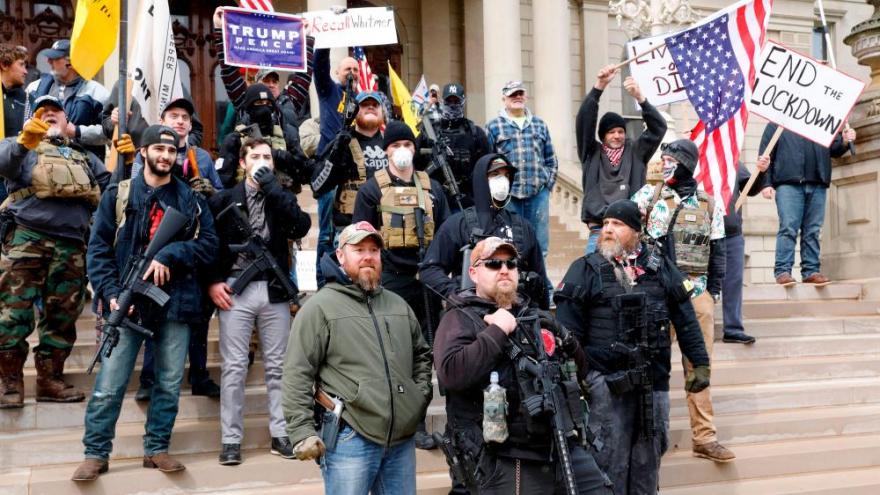 Michigan Democratic state lawmakers are upset, angry and demanding firearms be banned from the Michigan state Capitol building after the news that the FBI thwarted an alleged domestic terror plot to kidnap Gov. Gretchen Whitmer.

(CNN) -- Michigan Democratic state lawmakers are upset, angry and demanding firearms be banned from the Michigan state Capitol building after the news that the FBI thwarted an alleged domestic terror plot to kidnap Gov. Gretchen Whitmer.

One of the accused plotters allegedly had initially discussed storming the state Capitol and taking hostages, according to court documents.

"You know who those potential hostages would have been? STATE LEGISLATORS. My colleagues. My friends. Me. There was a reason we were scared to go to work during those violent gatherings. Will the GOP leaders take the steps needed to keep the Capitol safe now?" state Rep. Darrin Camilleri, a Democrat, tweeted Thursday.

She recalled how armed protesters gathered in the Senate chamber "to intimidate" her and her colleagues during protests of Whitmer's executive orders that were aimed at limiting the spread of the coronavirus. During those protests, armed men entered the Capitol building, where people are allowed to open carry firearms, and stood in the gallery overlooking the state Senate. Some demanded to be allowed on the floor of the legislative chambers.

Polehanki has a resolution in the Senate to prohibit firearms in the state Capitol, which is stuck in committee. CNN has reached out to Republican leadership in the Michigan Legislature for comment.

"Today we found out these threats are real," Polehanki said.

She added, "We literally dodged death this time. But what about next time?"

In a statement Thursday condemning political violence, House Democratic Leader Christine Greig said, "it's abundantly clear, now more than ever before, that immediate action must be taken to prohibit firearms from the State Capitol building."

"There is no excuse for the ongoing inaction or failure to act as a very really threat exists to the safety of Members, staff, the public and our state government," she added.