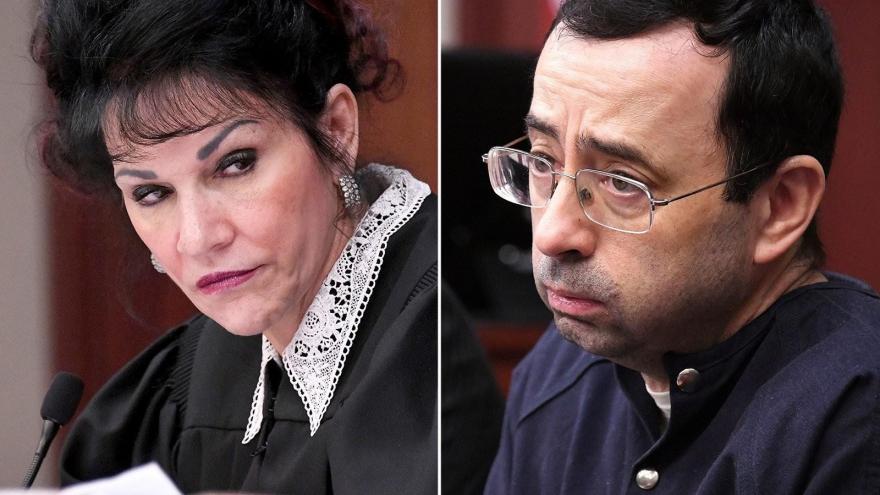 As she sentenced Larry Nassar up to 175 years in prison for sexual assault, Circuit Court Judge Rosemarie Aquilina ripped into the former USA Gymnastics doctor. "I just signed your death warrant," she said.

(CNN) -- One of the most memorable voices from serial sex abuser Larry Nassar's January sentencing was that of Michigan Circuit Court Judge Rosemarie Aquilina.

Nassar's team of public defenders say Aquilina was biased in rendering her decision and have asked for a new sentencing hearing with a different judge. Last week, the state court of appeals agreed to hear Nassar's motion to be resentenced.

When Aquilina sentenced Nassar to 40 to 175 years in prison, she ripped into the former USA Gymnastics doctor, who had pleaded guilty to seven counts of criminal sexual conduct. The judge imagined aloud what she'd like to do to Nassar if not for the Eighth Amendment to the US Constitution.

"Our Constitution does not allow for cruel and unusual punishment," she said. "If it did, I have to say, I might allow what he did to all of these beautiful souls -- these young women in their childhood -- I would allow someone or many people to do to him what he did to others."

In her remarks, she responded to a letter he wrote to her accusing her of running a media circus.

She told Nassar, once a renowned doctor for USA Gymnastics and Michigan State University, that there was no truth in his letter and he was being delusional.

In a statement issued Monday, the State Appellate Defender Office wrote, "It is in the most difficult cases that we must be especially vigilant to ensure that the rule of law prevails."

In their September filing, Nassar's attorneys wrote that the judge used the sentencing hearing to advance an agenda and that she had her mind made up about a sentence before the hearing began.

The Michigan Attorney General's office defended the judge, saying the conduct and language cited by Nassar's attorneys all came after the former doctor admitted his guilt.

"Once his guilt had been determined, the court's role shifted from exclusively being an impartial arbiter to an entity carrying the voice of the community," the filing said.

At the time of Nassar's sentencing, Aquilina said she wouldn't talk to the media until after the appeals process. But in November, she told NBC's "Today" show that she considered his side fairly and impartially. She said listening to nearly 160 people give impact statements was "so transformational for me."

She also spoke to the Detroit News in April, and to other media since.

Aquilina declined to comment through her spokesperson Jennifer Davis.

The judge's courtroom approach was striking and uncommon, legal experts said in January, particularly during impact statements, which are designed to give victims their day in court.

Victim Amanda Cormier told the court she lost her passion for music after Nassar abused her.

Aquilina listened to her and then offered some advice to Cormier -- and to her unborn baby.

"It seems to me, after this, you can finish writing. You found your voice," Aquilina said. "It's a strong, effective, brave voice, and you have a child coming. Maybe what you need to do is start and finish a lullaby."

Getting personal with the victims of the case was very unusual, one expert said at the time.

"It's not really an opportunity for a judge to give a comforting statement, psychiatric counsel, (or) trauma advice," said Stacy Schneider, a criminal defense attorney and legal commentator. "That wasn't the purpose of it."

Stu Slotnick, a defense attorney and former prosecutor, said it was unusual for a judge to express an strong opinons before a sentence is announced.

Judges showing empathy for victims is "totally appropriate," according to Jennifer Long, the chief executive officer at Aequitas, an organization that offers resources to prosecutors in cases of sexual and domestic violence.

"I don't think that's any way in contradiction to the rules of the judge. It demonstrates that the judge is understanding of the victim's suffering," she said then.

Nassar, 55, is in federal prison, convicted of child pornography charges. He is not eligible for release until 2069. If he is still alive at that time, he would then begin to serve the state sentence, which carries a minimum of 40 years.