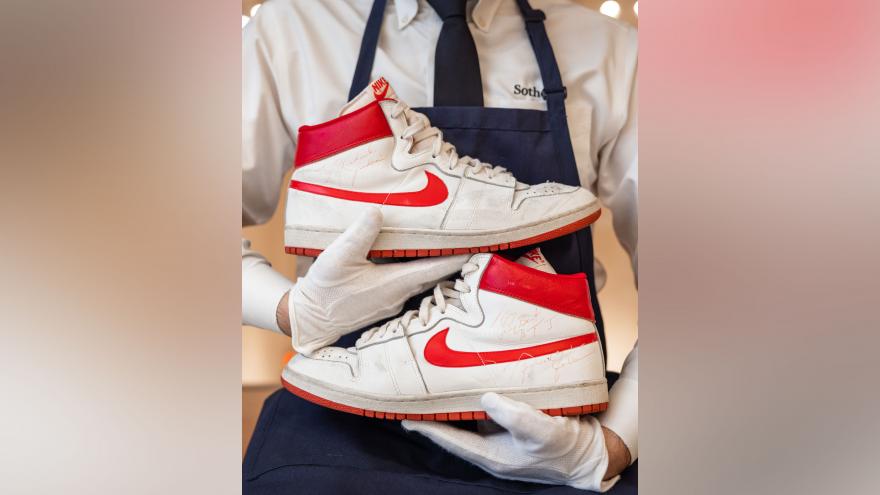 (CNN) -- A pair of Nike Air Ships sneakers worn by Michael Jordan have sold for a record-breaking $1.47 million (£1.07 million) at auction.

The basketball star wore the red and white sneakers during his fifth NBA game in his rookie season with the Chicago Bulls on November 1, 1984.

The shoes were sold to cards collector Nick Fiorella on Sunday, and set a new world record for the highest price achieved for a pair of sneakers at auction, according to Sotheby's auction house. The footwear also became the first pair of sneakers to sell for more than $1 million at auction.

Kanye West's Nike Air Yeezy samples sold for a staggering $1.8 million in a private sale in April, making them the most expensive sneakers in the world.

Brahm Wachter, head of Sotheby's streetwear and modern collectables, said in a statement that the "record-breaking result for the Jordan Nike Air Ships affirms the place of Michael Jordan and the Air Jordan franchise at the pinnacle of the sneaker market."

In 1984, Nike gave Jordan a signature line of shoes and clothes to convince him to sign with the sports company.

It was the first time the brand -- then a fledgling start-up in Portland, Oregon -- did anything like this, and it paved the way for many of the player collaborations we now see.

The "Air Jordan" was born and both Jordan and Nike immediately hit the jackpot.