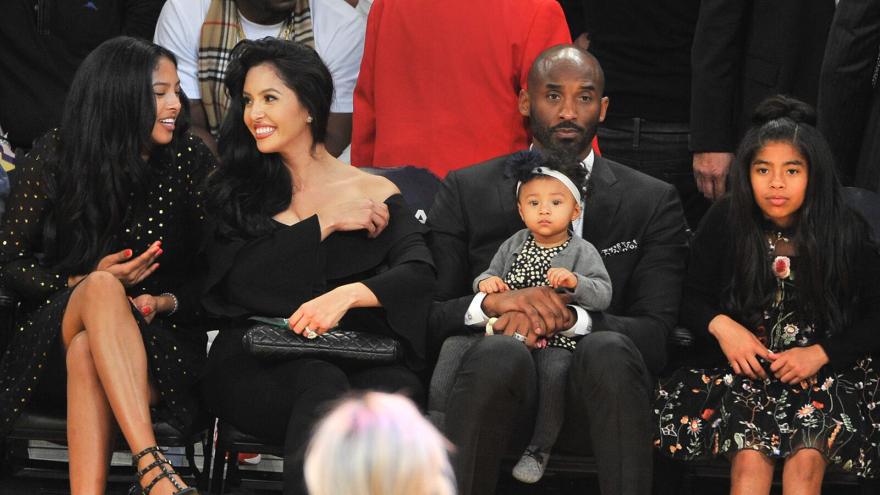 Kobe Bryant with his wife Vanessa and daughters Gianna, Natalia, and Bianka in 2017.

(CNN) -- From gravity-defying dunks and in-air acrobatics to an unquenchable thirst for dominance and an overt disdain for anything shy of excellence, Kobe Bryant spent much of his life following in the footsteps left by Michael Jordan's iconic Nike sneakers.

This weekend that path winds its way into New England, where Jordan will once more show Bryant the way, this time formally inviting him atop basketball's most elite mountaintop.

On Saturday Jordan will present Bryant for posthumous enshrinement into the Naismith Memorial Basketball Hall of Fame, an inevitable honor delayed nearly nine months by the Covid-19 pandemic.

Vanessa Bryant, Kobe's widow, will speak in honor of her late husband, while Jordan, a 2009 Hall of Fame inductee, will accompany her on stage. On January 26, 2020, Kobe Bryant, along with his 13-year-old daughter Gianna and seven others, tragically died in a California helicopter crash. According to the Hall of Fame, presenters are selected by "incoming Hall of Famers, or their family members if recognized posthumously."

Following Bryant's death, it was Vanessa who tabbed Jordan for Kobe's enshrinement, a nod to the pair's roundball bond. Kobe had long modeled his game after Jordan's, considering the six-time NBA champion a mentor and confidant. Jordan, meanwhile, referred to Bryant as his "little brother," and during Bryant's Los Angeles memorial service shared that, "When Kobe died, a part of me died."

Jordan recently revealed that he still clings to the last conversation he and Bryant shared, a series of texts tapped out between the two that Jordan can't bring himself to remove from his smart phone.

Though it's uncertain how much Jordan will speak Saturday night, he'll no doubt be guarding against a force as unrelenting as any he or Bryant saw during either of their legendary careers -- the emotions of the moment. After all, it was during his own Hall of Fame induction in 2009 when Jordan famously failed to fight back rivers of tears, a scene which ultimately birthed the infamous "Crying Jordan Meme."

But Bryant's ceremony will be far different than Jordan's, as the former's absence figures to hang palpably in the air, just as both Bryant's No. 8 and No. 24 jerseys float among the Staples Center rafters.

At age 41, Bryant is the rare legend to die prior to his own Hall of Fame induction. The world will never know what he might have said on this evening, how he'd have reflected on his journey, the one traveled along the path paved by Jordan that he was further clearing for Gianna, herself a blossoming basketball player.

And while Bryant's acceptance speech will go unheard, his achievements have long spoken for themselves. During his 20-year-career -- all spent with the Lakers -- the 6'6" Bryant collected five NBA championships, was selected to 18 All-Star teams, earned the NBA MVP, and twice led the league in scoring. His 33,643 points scored are 4th most all-time, 1,351 ahead of Jordan, who sits one place back of Bryant.

But as close as Bryant and Jordan were statistically, it's unlikely that numbers will drive the narrative during this weekend's events. More likely, the conversation will center around the passion shared by the two elite masters of their craft, one gone far too soon, the other called upon one final time to set the stage for his little brother.