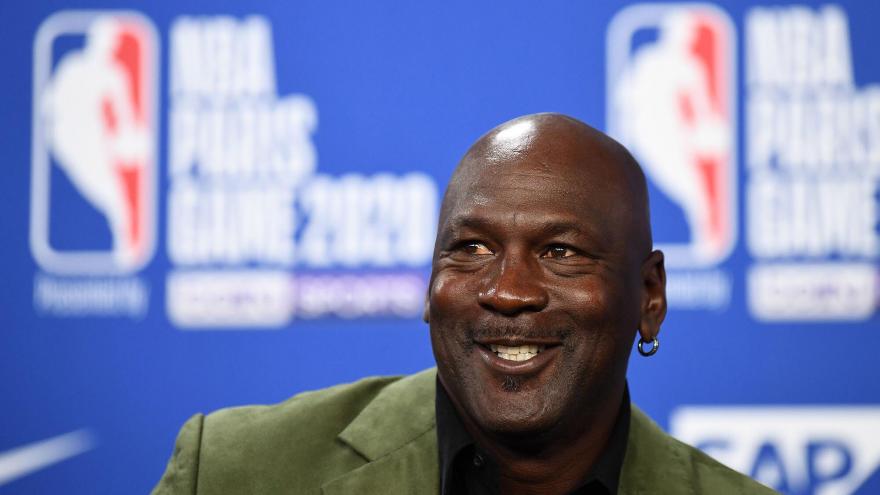 Michael Jordan donated $2 million from the proceeds of his biopic documentary "The Last Dance" to Feeding America to help provide food for people in need in Chicago and the Carolinas. Jordan, shown here, addresses reporters in Paris on January 24, 2020.

(CNN) -- "The Last Dance" was filled with hot dishes about Michael Jordan's time with the six-time champion Chicago Bulls. Now, some proceeds from the Emmy-winning documentary will go toward hot dishes for the nation's hungry.

Feeding America, the nation's largest hunger-relief outfit, on Wednesday thanked His Airness for a $2 million gift to the organization, which comes as the pandemic is pushing an inordinate number of Americans into food security.

How to help the hungry

"In these challenging times and in a year of unimaginable difficulty due to Covid-19, it's more important than ever to pause and give thanks," the 14-time NBA All-Star said in a tweet sent by the organization.

"I am proud to be donating additional proceeds from 'The Last Dance' to Feeding America and its member food banks in the Carolinas and Chicago," Jordan said.

Hit doc does more than entertain

ESPN's 10-part documentary on one of the greatest basketball players in history (and, yes, many hoops heads would argue the greatest) came as a welcome distraction in April, near the beginning of the pandemic.

"The Last Dance" was cobbled together from hundreds of hours of footage documenting the Bulls' rise to total dominance in the 1990s, with a special focus on the 1997-1998 season, when Jordan & Co. won their last of six titles.

The documentary series was set for a June debut, but after Covid-19 forced a hiatus to the NBA season and other sports offerings, ESPN moved up its release to fill the programming void.

Sports nuts and dabblers alike loved it, with 5.6 million people tuning into each episode on average, making it the most-watched ESPN documentary ever, surpassing a 2012 production about Auburn University's two-sport phenom, Bo Jackson.

The timing of MJ's donation is excellent, as Feeding America warned earlier this month that more than 54 million Americans could soon be facing food insecurity -- a number that rivals recession statistics.

That's roughly 16% of the population, more than 1 in 6 Americans. The sum represents roughly 17 million more people than were going hungry before the coronavirus outbreak, Feeding America estimates.

"What we've seen has been, unfortunately, a steady level of greatly, significantly increased need since the pandemic started," said Katie Fitzgerald, the nonprofit's chief operating officer. "About 40 percent of the people who are showing up for food distributions have never before had to rely on charitable food assistance."

In April, the US Department of Agriculture said it had set aside more than $1.7 billion to assist food banks in the then-looming crisis.

This week, Regina Status accepted a food basket, replete with turkey and other Thanksgiving mainstays, from Agatha House Foundation, a local food pantry, at her Bronx, New York, apartment.

She wasn't eligible for unemployment and was relying on money she has set aside for her daughters' college fund to survive, she told CNN.

Totaling her car several weeks ago made her life only more arduous. She's grateful for the weekly deliveries from Agatha House, she said.

"I didn't even know where that was going to come from," she said. "It's a relief that somebody is actually thinking about me."

Agatha House is seeing many new faces, with 100% increase in demand since the pandemic began, founder Jeanette Joseph-Greenaway said.

The Bronx, New York's poorest borough, serves as a microcosm of the national crisis: It has the highest number of Covd-19 cases and the highest unemployment rate in the five boroughs, demonstrating how the pandemic and its severe side effects threaten to compound already glaring health disparities among low-incomes families.

The congressional district that includes the Bronx, which is composed mostly of Black and Latino households, is the nation's second worst when it comes to food insecurity among children -- a condition that's only exacerbated by school closings.

"There are 22 million children who even before this pandemic relied upon free and reduced lunch," Feeding America CEO Claire Babineaux-Fontenot said. "When you hear that schools are closed, not only does that mean that there are challenges for children with an education, but it also means lost meals."

Status knows this all too well.

Before the pandemic, Black Americans were nearly two-and-a-half times as likely to live in food-insecure households as White Americans, while Latinos were twice as likely, according to Feeding America, whose projections for 2020 indicate 18 of the 25 counties that will be hit the hardest are majority African American.

Feeding America operates in every US county, with a network of 200 food banks and 60,000 food pantries, and has instituted low- or no-contact options in many places, including seniors-only hours, drive-through pantries and expanded home delivery.