Michael Jordan and Denny Hamlin team up to start NASCAR team, with Bubba Wallace as a driver 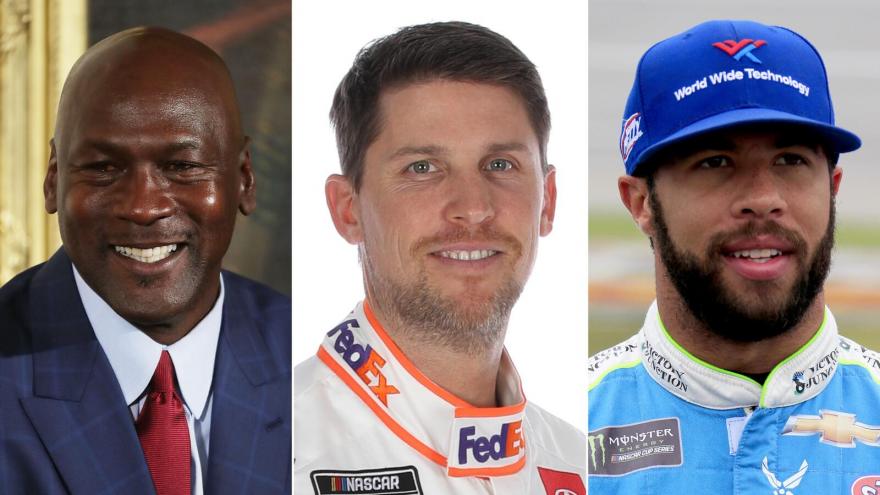 Michael Jordan and Denny Hamlin team up to start NASCAR team, with Bubba Wallace as a driver.

(CNN) -- NBA legend Michael Jordan will be trying his hand at a new sport soon, NASCAR.

Jordan and three-time Daytona 500 winner Denny Hamlin announced Monday they'd be teaming up to form a new NASCAR Cup Series team with Bubba Wallace as driver, according to an announcement by the Charlotte Hornets and Jordan's spokeswoman, Estee Portnoy.

Wallace has signed a multi-year deal to drive for the yet-to-be-named, single-car team.

The last Black man to own a full-time race team in NASCAR's premier series was Wendell Scott, who owned and raced his own car from the 1960s into the early 1970s.

"I've been a NASCAR fan my whole life," Jordan said. "The opportunity to own my own racing team in partnership with my friend, Denny Hamlin, and to have Bubba Wallace driving for us, is very exciting for me."

NASCAR has historically struggled with diversity and there have been few Black owners, Jordan said.

"The timing seemed perfect as NASCAR is evolving and embracing social change more and more," he said.

Jordan acquiring a NASCAR team comes as diversity and inclusion efforts have become a focus in sports around the world with the resurgence of the Black Lives Matter movement. Protests calling for an end to racism and police reform have led companies, athletes and celebrities to come to terms with America's racial strife.

Wallace, the only full-time African American driver in NASCAR's Cup Series, announced earlier this month he was leaving the Richard Petty Motorsports team after the 2020 season. Wallace had been with the team the past three seasons.

"This is a unique, once-in-a-lifetime opportunity that I believe is a great fit for me at this point in my career," Wallace said Monday. "Both Michael and Denny are great competitors and are focused on building the best team they possibly can to go out and compete for race wins."

In June, Wallace called for a ban of Confederate flags at races, which the league ultimately did days later. He also had a Black Lives Matter paint scheme on his car that same month.

Hamlin said in a statement that "it just makes sense now to lay the foundation" of his racing career after he retires from racing.

"Michael and Bubba can be a powerful voice together, not only in our sport, but also well beyond it," he said.

Correction: An earlier version of this story overstated the number of years since the last Black NASCAR team owner. The last Black man to own a team was Wendell Scott, who owned and raced his own car from the 1960s into the early 1970s.