Michael Jackson's socks from his first on-stage moonwalk are up for auction. They could fetch $2 million 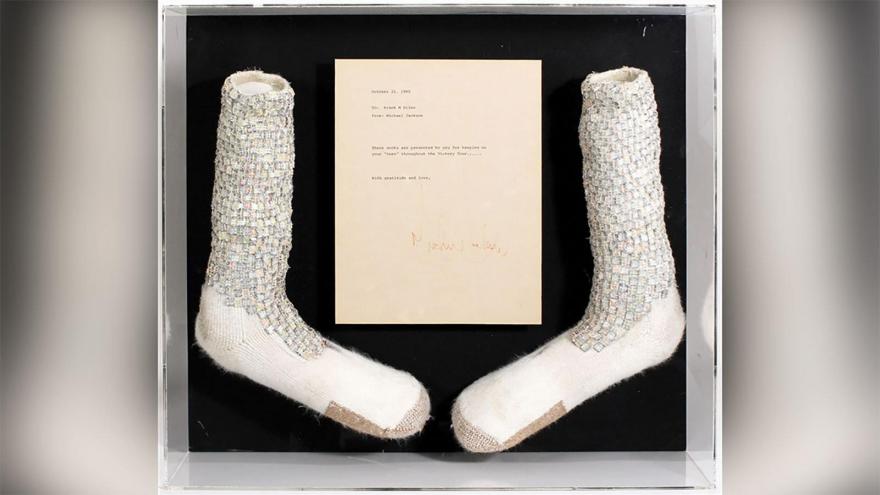 The socks are seen here, in all their glory. Full credit: Courtesy Gotta Have Rock and Roll Auction House

(CNN) -- Almost 40 years after Michael Jackson performed his iconic moonwalk for the first time on stage, one fan could get to relive the experience.

And these socks won't come cheap. Gotta Have Rock and Roll, the online auction site offering the socks, estimates the pair will go for upwards of $2 million.

Ed Kosinski, CEO of Gotta Have Rock and Roll, said the socks look "heavily worn," but he couldn't say for sure how often they were worn after the Motown show.

The socks aren't the only Jackson memorabilia to go on sale. His "Suit of Lights" from his "Victory Tour" era is expected to fetch upwards of $20,000. A Chicago Bulls jersey signed by Jackson and Michael Jordan is also expected to get up to $20,000.

Despite these high price tags, Jackson's legacy has become controversial -- most notably after the release earlier this year of HBO's "Leaving Neverland" documentary, chronicling Jackson's alleged sexual abuse of two men when they were children.

Jackson, who died in 2009 at age 50, wasn't ever convicted of a crime and denied similar allegations when he was alive. His family has called the documentary a "public lynching" and has filed a suit against HBO. (HBO and CNN share parent company WarnerMedia.)

For those who may feel conflicted about Jackson's legacy, the auction also has options not related to the star.

A lock of Kurt Cobain's hair, for example, is expected to fetch up to $12,000. It even comes in a little heart-shaped box.