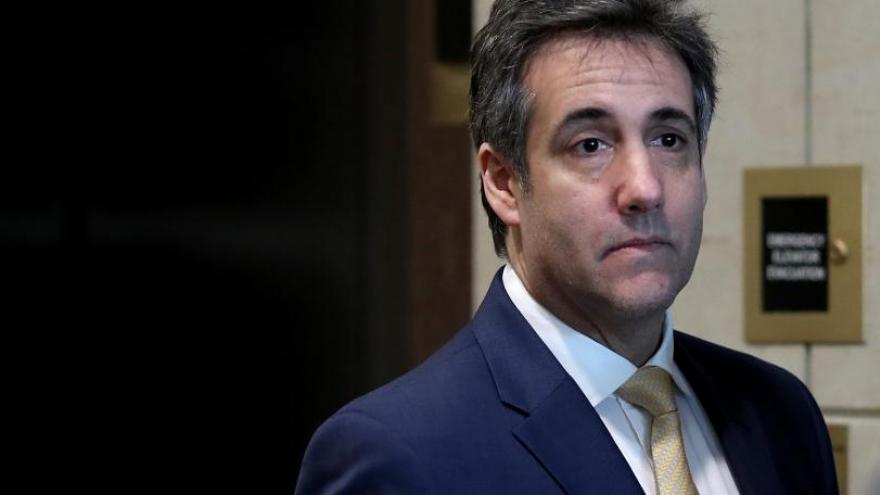 President Donald Trump's former lawyer Michael Cohen will appear in the coming days in a series of ads for the Democratic group American Bridge. This image shows Cohen arriving for a closed hearing at the U.S. Capitol, February 28, 2019 in Washington, DC.

(CNN) -- President Donald Trump's former lawyer Michael Cohen will appear in a series of ads for the Democratic group American Bridge in the coming days, telling voters that Trump "can't be trusted" and that they "shouldn't believe a word he utters" during the Republican National Convention this week.

"For more than a decade, I was President Trump's right-hand man, fixer and confidant. I was complicit in helping conceal the real Donald Trump. In essence, I was part of creating an illusion," Cohen says in the roughly 90-second long video recorded for the group that will be cut down into shorter ads. "Later this week, he's going to stand up at the White House and blatantly lie to you."

Cohen adds: "I'm here to tell you he can't be trusted -- and you shouldn't believe a word he utters. So, when you watch the President this week, remember this: If he says something is huge, it's probably small. If he says something will work, it probably won't. And if he says he cares about you and your family, he certainly does not."

The Trump campaign in a statement attacked Cohen's credibility.

"If you believe anything Michael Cohen says," said Matt Wolking, a spokesman for the Trump campaign, "I have a basement in Delaware to sell you."

In a nod to the expected push back from Trump and the fact that most Democrats see Cohen as a contemptible figure, the former Trump adviser closes the video by saying, "You don't have to like me. But please, listen to me."

The ads are an effort to counterprogram the Republican National Convention happening this week from a super PAC that supports Democratic nominee Joe Biden and other party candidates. They will begin running digitally on Monday night and on television starting Wednesday, as the convention enters its final two days.

Cohen made the comments during an interview with American Bridge staffers. The video represents the highlights of the super PACs conversation with Cohen, comments that will soon be cut into 30- and 60-second clips for digital and television ads.

Cohen's comments get to the heart of Trump's argument for reelection.

The former fixer says Trump's promises to rebuild an economy hurt by the coronavirus aren't true, arguing that the economy will only get better for people like the President because "if you think he cares about working class Americans, you're dead wrong."

And Cohen says Trump's promises about law and order are "laughable."

"Virtually everyone who worked for his campaign has been convicted of a crime or is under indictment," he says. "Myself included."

A spokesperson for American Bridge declined to comment when asked if the organization had paid Cohen for the appearance. The group, which conducts opposition research and runs negative ads against Republicans, was founded in 2010 by David Brock, who began his career as a conservative journalist before becoming a Democratic operative with close ties to the Bill and Hillary Clinton.

"From family members to long-time confidants, those who know Donald Trump best are sounding the alarm about his character, honesty, and fitness for office. The American people deserve to hear the unvarnished truth: our country cannot take four more years of Donald Trump as president," said Bradley Beychok, president of American Bridge.

The effort is also aimed at getting under Trump's skin during a critical week -- with Democrats believing that the sight of his former fixer on television slamming him could annoy a President who often vents his anger on Twitter.

Cohen and Trump's relationship has gone from loyalty to acrimony over the span of a few years. The former lawyer who is now slamming Trump in ads used to tell reporters that he would take a bullet for the then-real estate developer.

And the relationship has landed Cohen in legal trouble. Trump's former fixer admitted in February 2018 that he opened a limited liability company in 2016 to pay adult film actress Stormy Daniels, who claimed to have had a sexual encounter with Trump in 2006, $130,000 to keep quiet about the alleged affair. Trump and the White House have denied Daniels' allegations of an affair.

The FBI then raided Cohen's office, hotel room and residence in April, seizing information related to the Daniels payments.

Cohen's fidelity to Trump began to falter after that, with the former Trump lawyer excoriating the President in an interview with ABC News in July 2018. He would later plead guilty in a Manhattan federal court to eight criminal counts in August 2018, including tax evasion, making false statements to a bank and campaign finance violations. He later pleaded guilty to another charge -- lying to Congress as part of the special counsel's investigation into Russia's involvement in the 2016 election.

Cohen reported to a federal prison in Otisville, New York, in May 2019, where he was set to begin serving a three-year sentence. Cohen was released to furlough in late May as part of a release program undertaken by the Bureau of Prisons to address the coronavirus pandemic.

Cohen was forced to return to prison on July 9 when he balked at a provision in his home confinement agreement that would have prohibited his use of social media and engagement with the media, including books. Cohen is slated to publish a memoir in September on his time working for Trump titled "Disloyal: A Memoir. The true story of the former personal attorney to President Donald J. Trump."

Cohen's lawyers alleged that he was ordered back to prison in retaliation for the tell-all book, a claim that a federal judge agreed with a few weeks later when he ordered Cohen released from prison and back to home confinement.