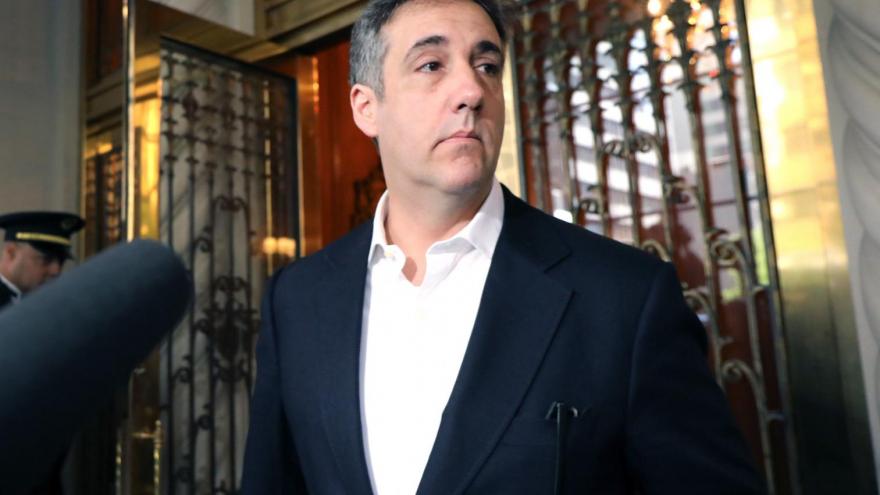 Michael Cohen, the former personal attorney to President Donald Trump, prepares to speak to the media before departing his Manhattan apartment for prison on May 06, 2019 in New York City.

Levine said Cohen had been ordered to appear at the federal court in downtown Manhattan to convert his furlough to home confinement but was detained after failing to agree to the terms of the federal location monitoring for the Southern District of New York. He was put in custody in a lower Manhattan correctional facility.

Cohen, Levine said, had been presented with an agreement not to engage with the media through any medium including books -- a restriction that would block the release of his forthcoming tell-all about his time working with Trump which he said was "close to completion" earlier this month.

"I've never seen any language like this in my life that would strip a person of their First Amendment rights to communicate with the media," Levine said.

"We made our objections known to the probation officers and we asked what we can do to work it out," he continued. Levine said he then "received an order and the US Marshals office came with shackles to shackle Michael Cohen."

Sue Allison, a spokeswoman for the Bureau of Prisons, told CNN Thursday that Cohen "refused the conditions of his home confinement and as a result, has been returned to a BOP facility."

But Levine said that isn't true, claiming that Cohen didn't decline to sign anything.

"They didn't even offer him a pen," Levine said.

Another one of Cohen's attorneys, Lanny Davis, said later on Thursday that Cohen and Levine had arrived at the courthouse in hopes of finalizing the details of his home confinement when they were approached by US Marshals. Cohen told the Marshals, "I'll sign exactly what you want me to sign so that I don't have to go to jail," but the Marshals said it was out of their hands, Davis said.

While Cohen objected to conditions of his release that would have blocked him from having contact with the media, posting on social media and releasing his book, the former Trump lawyer immediately backed down once the cuffs were applied, Davis said.

Cohen was also reportedly spotted eating at a New York City restaurant recently. When asked if that incident was related to his detainment Thursday, Levine told reporters outside the courthouse, "I would leave that to your viewers."

"I think it's probably the language in the agreement, which, again, I don't know who gets stripped of their First Amendment rights, but it probably has to do with the optics of everything," he said.

Davis said Cohen "believed he was consistent with the rules or he wouldn't have done it." No one from the Bureau of Prisons contacted him and the meeting about his home confinement had been previously scheduled and was not a response to the trip to the restaurant, Davis added.

The episode comes after Cohen was released on furlough from prison in late May due to coronavirus fears.

Cohen was serving a three-year sentence in New York after pleading guilty to lying to Congress, tax charges and two campaign finance charges for facilitating hush money payments to two women who alleged affairs with Trump.

The President has denied having affairs with the women.

A vocal surrogate for Trump during the 2016 presidential campaign, Cohen often sparred with reporters and appeared on television to support his longtime client.

But a months-long investigation by the US Attorney's Office for the Southern District of New York into Cohen exposed that he had acted with Trump and his allies, including David Pecker -- the CEO of the National Enquirer's publisher, American Media Inc. -- to suppress potentially damaging claims against the now-President.

When pleading guilty to his crimes, Cohen implicated the President, telling a federal judge that he had made the payments "in coordination with and at the direction of" Trump, who prosecutors identified in court filings as "Individual 1."

Cohen later refused to commit to not pursuing a possible book deal while testifying before members of the House Oversight Committee in February 2019.

As a result, he was served a cease-and-desist letter while in prison from Charles Harder, an attorney for the Trump Organization, requesting he stop working on the book, two sources previously told CNN.

Among the reasons cited by Harder, they say, is writing the book would violate a confidentiality agreement and a lawyer's ethical and legal obligations, such as attorney-client privilege.

But, to this point, Cohen has pushed forward with his plans for the book and even floated a release date before the November presidential election.

"...anticipated release date will be late September," he tweeted earlier this month.