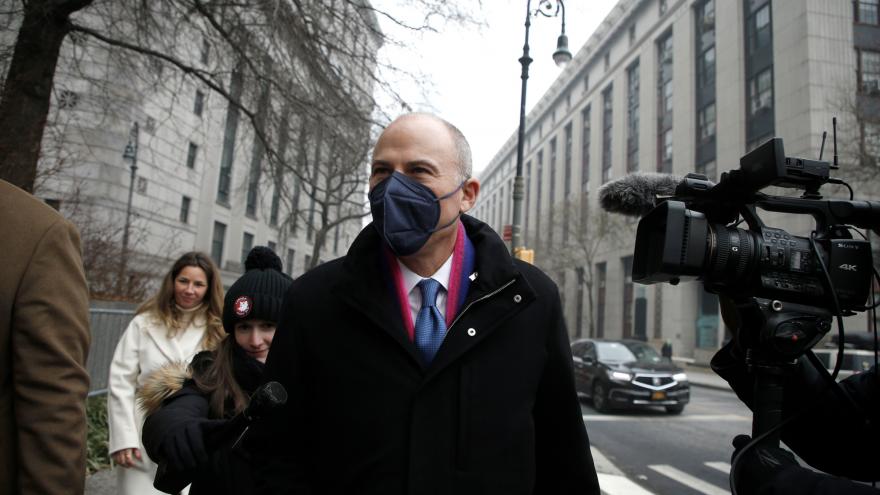 Prosecutors alleged that Avenatti -- who helped negotiate the $800,000 advance for Daniels' October 2018 book "Full Disclosure" -- defrauded his former client by instructing her literary agent to send two of the installments of the advance totaling nearly $300,000 to an account controlled by him, rather than directly to Daniels, without her knowledge.

The verdict came after an eventful day when the jury asked the judge for help, saying one of the 12 was "acting on a feeling" and not considering evidence.

"We have one juror who is refusing to look at evidence and is acting on a feeling. We need assistance on moving forward. She does not believe she needs to prove her side using evidence and refuses to show us how she has come to her conclusion," the note said, according to Judge Jesse Furman.

"Please help us move forward not going on any evidence, all emotions and does not understand this job of a jury," the note added, with the word "please" underlined.

Avenatti moved for a mistrial arguing that the jury is clearly deadlocked, and any further instruction or action would be coercive.

Furman considered the motion but denied it saying, "I don't think we're there yet."

Avenatti opposed some wording in the instruction telling the judge it could "appear to convince a potential hold-out juror for acquittal." The judge noted Avenatti's assumption that the jury was leaning to convict him and said they had no way of knowing the jury split.

The jury has been deliberating since Wednesday.

Furman also denied prosecutors' request to ask the jury foreperson to identify the holdout juror so the court may consider remedies including dismissal of that juror for refusing to deliberate.

Just before noon, the judge brought the jury into the courtroom to instruct jurors of their duties to deliberate based on the evidence and charge them to continue pushing forward. The instruction in part reminded jurors they are not "to be swayed by sympathy or emotion" when considering evidence to reach a verdict.

The jury of seven women and five men had no visible reactions to the judge's instructions.

After the jury left, the judge discussed his earlier ruling denying Avenatti's motion for a mistrial based on Daniels' Friday interview on CNN's "New Day," calling it "beyond frivolous." Avenatti said the interview was "outrageous."

In the interview, Daniels said she was "flabbergasted" that the jury was still deliberating and speculated there could be some bias against her for her work in the adult film industry and belief in paranormal activity.

"Who cares what I believe in, who cares what my spirituality is, where I work, what I've done," Daniels told CNN's Brianna Keilar.

"Theft is theft, forgery is forgery -- it really shouldn't matter, it seemed pretty cut and dry" she said.

If Avenatti is found not guilty, she said, that "sets a precedent that is absolutely terrifying for anybody in the adult film business and anybody that works in the paranormal field or even does paranormal as a hobby."

"It basically is free license to commit crimes against us and get away with it, and that's really terrifying," she said.

The judge said he watched the interview but there was no suggestion any jurors saw it. He advised both parties to rein in comments to the media.