Miami street to be named after Trayvon Martin 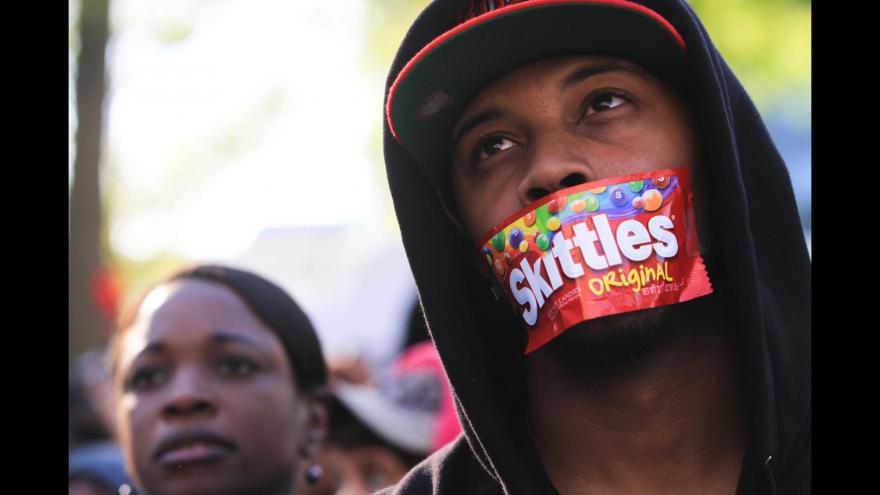 A street in Miami will be named after Trayvon Martin. College student Jajuan Kelley covers his mouth with a Skittles wrapper as he stands in a crowd of thousands rallying at the Georgia State Capitol in Atlanta in memory of Trayvon Martin in March 2012.

(CNN) -- The street in front of the Miami high school that Trayvon Martin attended before his life was abruptly ended will be renamed Trayvon Martin Avenue.

Miami-Dade County commissioners approved the resolution this week to designate a portion of NE 16th Avenue after the 17-year-old, who was shot and killed in 2012.

The Black teen's death at the hands of George Zimmerman, a neighborhood watch volunteer, "raised America's consciousness and pierced its conscience," according to Martin family attorney Benjamin Crump, who was quoted in the government memorandum to rename the road.

While visiting his father in Sanford, Florida, in February 2012, Martin was returning home from a convenience store when he found himself being followed by Zimmerman.

Zimmerman called 911 to report a "a suspicious person" in the neighborhood. Moments later, neighbors reported hearing gunfire. Zimmerman acknowledged that he shot Martin and claimed he acted in self defense.

Zimmerman was ultimately acquitted in the case, and in December 2019 he sued Martin's parents and others for $100 million, claiming there was a conspiracy to frame him.

According to the memorandum, the fatal shooting "elicited national conversations about race relations, racial profiling, gun rights, stand your ground laws, and was a catalyst that set nationwide demands for social justice in motion."

Zimmerman's acquittal in the shooting death prompted the social media hashtag #BlackLivesMatter and later shifted into a social justice movement against police brutality and racially-motivated violence around the world, the memorandum notes.

Family and friends described Martin as a peaceful, laid back and positive person, the memorandum notes.

Martin had been planning to stay close to home and attend college at either the University of Miami or Florida A&M University to pursue a career that would allow him to fly or work with aircraft, it says.

The Miami street's new name is expected to go into effect this week.