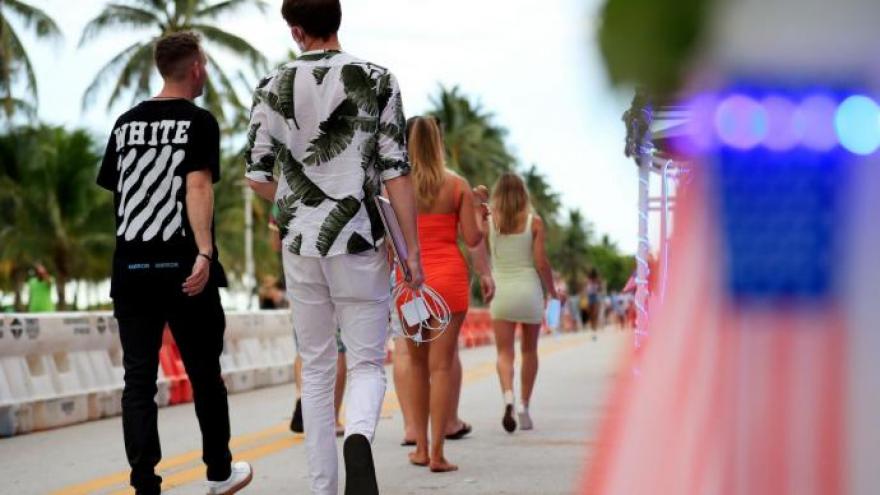 People walk past restaurants on Ocean Drive on July 03, 2020 in the South Beach neighborhood of Miami Beach, Florida.

(CNN) -- As Florida sets the most dubious of records amid the coronavirus pandemic, Miami-Dade County has decided it's done playing by the state's rules.

As of Wednesday, restaurants in the county, the state's most populous, will be shut down -- again -- except for takeout and delivery, county Mayor Carlos Gimenez announced in a news release. The mayor's executive order will also close party venues and short-term accommodation rentals. On Tuesday, he revised the order to allow gyms and fitness studios to remain open with masks required inside, according to a tweet.

What you need to know about coronavirus

Summer camps and daycare centers may remain open with capacity limits and other rules. Office buildings, retail stores and grooming services will also remain open. The order will not affect certain outdoor activities, hotel and condo pools or the planned Tuesday reopening of county beaches, the mayor said, but it contains caveats mandating social distancing and mask rules.

"If we see crowding and people not following the public health rules, I will be forced to close the beaches again," Gimenez said.

A 10 p.m.-to-6 a.m. curfew will remain in effect for everyone but essential workers and those with religious obligations.

Anyone witnessing violations is asked to call 305-4POLICE, the statement said.

"We want to ensure that our hospitals continue to have the staffing necessary to save lives," Gimenez said, explaining the motivation.

Looking at the numbers, "we saw a huge spike" about two weeks after opening up gyms and other facilities and rolling back some restrictions on restaurant opening hours at the end of May, Gimenez told CNN.

Florida now has more than 206,000 cases, placing it behind only New York and California, and it topped its highest daily tally Friday with 11,436 cases -- more than a dozen states, the District of Columbia and Puerto Rico have tallied since the beginning of the pandemic.

The state's numbers over the past two weeks are disturbing to many health professionals. From June 23 to July 5, state hospitalizations spiked 88%, from 818 to 1,538, while the number of patients on ventilators or in intensive care units more than doubled. The state is also experiencing a shortage of contact tracers, according to a CNN investigation.

Especially worrying, Gimenez said, is the rise from about 8% positive cases among those tested to more than 20%.

"That's the real issue, and when you correlate that with the increase in hospitalizations, then you know you have an uptick in the infect rate here in Miami-Dade County," Gimenez said.

Hospital director: 'Kudos to the staff'

The University of Miami Health System is seeing positive tests on the rise and more patients, ranging from their 20s to 90s, said Dr. David Lang, the system's medical director of emergency medicine.

"I think it puts some stress on the system," he said. "Many of them are getting sicker, and our admissions have gone up."

The hospital has been prepping since January and has a plan that is comprehensive and fluid, the system's Chief Medical Officer Dr. Tanira Ferreira said. While the staff is capable of handling different levels of surge -- and have beds, ventilators and medicine to handle it -- it has not been easy on them.

"Certainly, it does stress the system, but kudos to the staff. We have not stopped working. The staff continues to work -- work nights, days, weekends, you call it," Ferreira said.

When the state first shut down in April, the city of Miami was counting about 35 new cases a day, and the curve flattened thereafter, down to 14 new cases a day, said Miami Mayor Francis Suarez. He presides over the city, while Gimenez helms the county government.

"Now, we're at over 90 new cases per day as of Thursday," Suarez said. "We're at three times faster growth rate. I think that the virus has just become very efficient at spreading. ... When one person gets it in a household, they come home. By the time they experience symptoms and get tested, everybody in the house is infected, so you go from one person to a four- or five-person infection rate almost overnight."

The city is mandating masks in public and instituting penalties for businesses that don't follow the rules, Suarez said. Another stay-at home order could be in the cards, the mayor said. He'd like to see a statewide mask rule, he said.

"I don't think it's any different than ... asking people to wear a seat belt and ticketing them if they don't," Suarez said.

Miami Beach is also experiencing rising hospitalizations that could end in another shelter-in-place order, Mayor Dan Gelber told CNN, predicting the situation in his city is "going to get much worse."

"Too many people obviously are not taking seriously at all these admonishments to socially distance, to wear masks, all those things," Gelber said. "We're going to try to avoid a full shelter-in-place, but we can't take that out of the equation because, frankly, if our hospital system is so overwhelmed -- well, then we will have to consider that."

Though Miami-Dade County is the Covid-19 epicenter in a state that has become the nation's epicenter, the county doesn't have its own contact tracers because the duties fall under Florida's responsibilities, it said.

In mid-May, Gimenez said the county would hire up to 1,000 contact tracers, but asked Monday how many had been hired, a county representative said via email only the Florida Department of Health can do the work.

"We are in discussions with the state on how the county can supplement their efforts. As soon as these discussions conclude, we will have a direction in what we can do to assist in the contact tracing efforts. So, we don't have our own," the Miami-Dade statement said.

In his statement announcing the executive order, Gimenez said the county was "still tracking the spike" in cases involving 18- to 34-year-olds, which he said was a result of younger residents congregating in congested places without precautions. Graduation parties, restaurant gatherings and protests were among the places the virus spread, he said, citing doctors.

"We need to curtail the social activities of young people, because that's where our problems started, with young people," Gimenez said on CNN. They are then "transmitting it to their parents and their grandparents, to where now we've had a doubling of people in the hospital with Covid-19."

The Florida Department of Health did not respond to CNN's requests for comment.

In the meantime, officials are reminding the public to do its part to slow the virus' spread.

"We can tamp down the spread if everyone follows the rules," Gimenez said. "I am counting on you, our 2.8 million residents, to stop the spread so that we can get back to opening our economy.

"What needs to be happen is people need to adhere and follow that message."