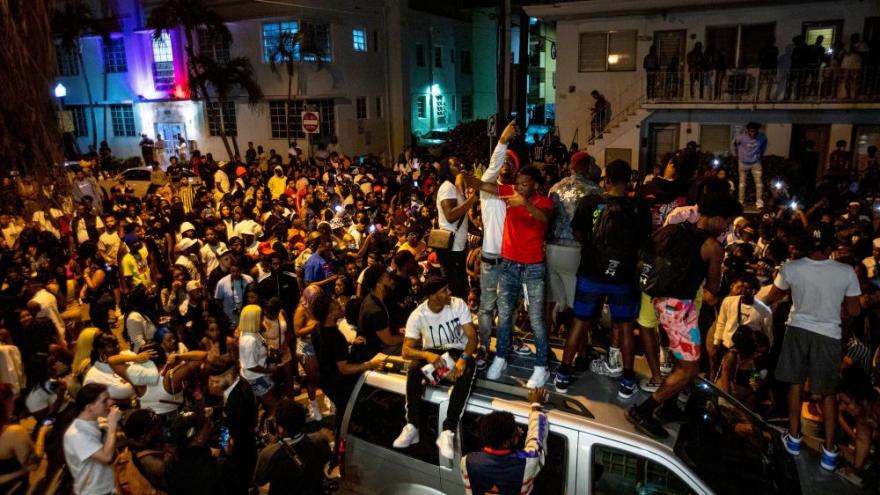 Crowds defiantly gather in the street while a speaker blasts music an hour past curfew in Miami Beach, Florida, on March 21, 2021.

(CNN) -- An attempt to enforce an emergency curfew on spring breakers at Miami Beach last weekend devolved into chaos. But this weekend, city officials say they're prepared.

Authorities have extended a curfew and state of emergency in the Florida city. Restrictions include an 8 p.m. curfew in the entertainment district, a series of road closures aimed at stemming traffic, and the suspension of in-house dining at restaurants and cafés in what authorities call the "High Impact Zone."

City officials outlined the emergency measures in a statement on Tuesday, and said violators will be subject to arrest and criminal prosecution. The restrictions will be lifted on March 29 at 6 a.m.

Last Saturday, city police fired pepper balls in an attempt to break up throngs of mostly maskless partiers on the city's main thoroughfares. The aggressive enforcement action came just hours after Miami Beach Mayor Dan Gelber declared a state of emergency and set a curfew, saying the crowds that descended on the city are "more than we can handle."

Gelber on Thursday told CNN's Boris Sanchez that the city is now better prepared to handle the revelers.

"We've brought in an enormous contingent of police. We have a curfew. We're closing the causeways at 10 p.m. to reduce the number of people here. So we're hopeful," Gelber said. "But of course, hope isn't enough. You've got to have a plan, and I think we have a plan."

Some people 'just want to cause havoc'

Miami Beach always attracts large crowds of spring breakers, but after a year of coronavirus lockdowns and restrictions, the stir-crazy seem to be wanting to party extra hard.

"I don't think there's any question that Covid and people being cooped up and unable to go anywhere has created a pressure that's being relieved in our city," Gelber said.

Gov. Ron DeSantis may not have helped, previously bragging that the state is an "oasis of freedom" during the pandemic.

Gelber noted the governor's words, but stopped short of criticizing him.

"Well, it obviously didn't help with the governor declaring this an 'oasis of freedom'. But, you know, we have to deal with the issues as they come to us. So I don't really I need to point fingers," he said.

The mayor said most of the revelers have been well behaved, but among them are "a number that just want to cause havoc, want to bring a weapon or want to brawl."

All together, more than 1,000 people have been arrested in Miami Beach since February 3, city manager Raul Aguila said at an emergency commission meeting on Sunday.

Miami-Dade's Community Relations Board is urging visitors to remember that Miami is more than a vacation destination, it's also a community.

"Miami is a great place and that's why a lot of us live here, but visitors have to remember people live here and they need to be respectful of our laws and regulations, and understand it could be different than the rules where they come from," board chairman John Quick told CNN.

Visitors are being asked to respect certain Covid-19 restrictions and rules about where they can and cannot drink alcohol.

City officials also want visitors to know that emergency measures mainly apply to the city's entertainment district. "All other areas in Miami Beach are open for residents and visitors to patronize after the 8 p.m. curfew in the High Impact Zone, such as Lincoln Road, South of Fifth, Sunset Harbour, Collins Park, 41 Street, North Beach and more," the city said in a statement.

Mayor Gelber said he just wants people to have good time and be respectful of one another.

"If you're coming here, just come here to enjoy the things that we have: our beaches, our restaurants, our venues, realizing that there's a pandemic so be safe," he said.

"Come here to have a responsible fun vacation. Don't come here to be a jerk."