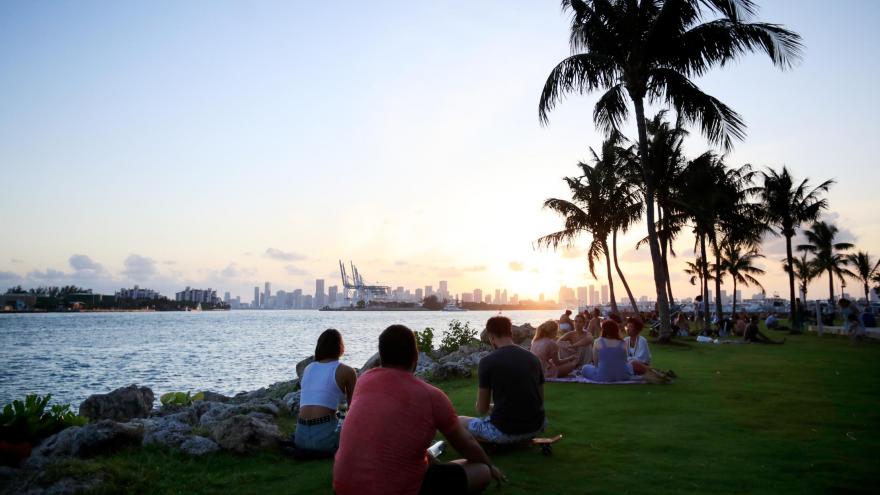 (CNN) -- Not even a week since reopening, the city of Miami Beach closed the popular South Pointe Park back up after thousands of visitors failed to wear face coverings and social distance to slow the spread of the coronavirus.

The Miami Beach Police Department announced Monday that the park was closed until further notice after they issued 7,329 verbal face cover warnings and more than 470 warnings for failing to social distance between Friday and Sunday. Most of the violations were at South Pointe Park, according to MBPD.

South Pointe was one of several parks and recreational facilities in Miami Beach that reopened on April 29 under the city's eased coronavirus restrictions.

Visitors were welcome as long as they wore face coverings at all times, kept their groups to less than 10 people, kept six feet apart from other groups and didn't participate in any organized activities, sports or classes.

But City Manager Jimmy Morales said the efforts by city authorities to enforce the rules were met with hostility, and while officials tried to lessen the crowds by closing the park's parking lot on Sunday, it didn't help.

"We tried in good faith to open our parks to help folks get out and about safely. In almost every other park in the city, this experiment has been successful. South Pointe Park is the most egregious exception," Morales said in a statement to CNN. "We have had city staff in the park to encourage people to comply, but they were met with hostility and non-compliance."

"There is no way to effectively enforce social distancing when hundreds of individuals refuse to do so. The best way to protect our residents and first responders is to keep it closed until further notice," Morales added.

In Southern California, two beach cities are pursuing legal action against Gov. Gavin Newsom after he ordered all beaches in Orange County to close starting last Friday. Newsom's decision was met with nearly 3,000 people gathering at Huntington Beach to protest.