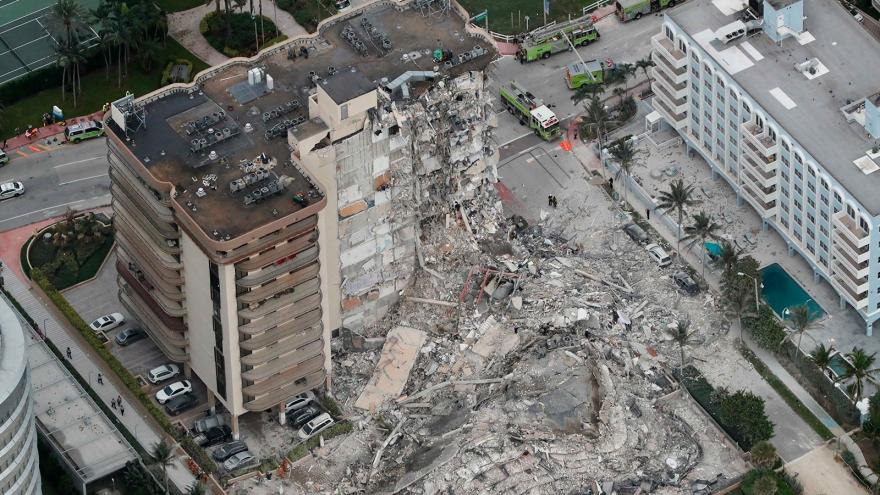 According to Miami-Dade County Mayor Daniella Levine Cava, 102 people have been accounted for in the building collapse in Surfside, Florida.

She said that at least 99 people are still unaccounted for as search and rescue efforts continue.

An intense search and rescue effort is underway after part of a 12-story residential building collapsed early Thursday in the South Florida town of Surfside, killing at least one and leaving almost 100 people unaccounted for.

About 55 of the 136 units at Champlain Towers South collapsed around 1:30 a.m., officials said, leaving huge piles of rubble and materials dangling from what remained of the structure in the beachfront community a few miles north of Miami Beach.

At least 99 people were unaccounted for as of Thursday afternoon, according to Miami-Dade Police spokesperson Alvaro Zabaleta.

At least one person died because of the collapse, Miami-Dade County Mayor Daniella Levine Cava said.

Rescuers helped a boy from the debris alive, a witness said, and video showed responders helping others leave the standing portions of the building, sometimes using a bucket atop a fire truck's ladder.

One of the voices is from an individual in the parking garage area that they are having difficulty getting to, he said.

"It's kind of hit or miss," he said. "You get into the zone where you are so passionate and so focused and so determined to make sure you are doing everything possible to save a life in an event like this."

Besides the two pulled from rubble, 35 others had been helped from standing parts of the building, Jadallah said.

"We still have hope to be able to identify additional survivors," Florida Gov. Ron DeSantis told reporters near the scene. "The state of Florida, we're offering any assistance that we can."

A resident on the third floor, Barry Cohen, heard what he thought sounded like an explosion. His apartment was intact, but when he opened his door and tried to leave, he "looked down the hallway ... and there was nothing there," he said.

"It was just a pile of dust, and rubble," and the building shook as he awaited rescue, Cohen told CNN's "New Day."

After about 20 minutes, a rescue crew used a cherry picker to help him, his wife and another resident from a balcony, he said.

Besides two people who were taken to hospitals, 10 were assessed and treated at the scene, Jadallah said.

The cause of the collapse wasn't immediately known. The building was undergoing roof work, but it's not known whether this was a factor in the collapse, Surfside Mayor Charles W. Burkett said.

It was built in 1981, according to online Miami-Dade property records.

The affected area is predominantly Jewish, and rabbis and chaplains are in the area to assist, Levine Cava said.

Levine Cava said the hotline has been set up for people trying to get information about their loved ones who may have been in the building: 305-614-1819.

Witness finds boy and gets rescuers to him

Witness Nicholas Balboa told CNN he saw a boy's wiggling fingers sticking out of the debris shortly after the collapse -- a discovery that led to the child's rescue.

Balboa, who lives nearby, said he was walking his dog around 1:30 or 1:40 a.m. when he felt the ground shake and saw plumes of dust and debris. He and another man went to the back of the building. Just as he was doubting anyone could survive the collapse, he heard someone screaming, he said.

"Finally, I got close enough to hear him, and (the trapped boy) said, 'Can you see my hand?'" Balboa told CNN's "New Day."

"He was sticking his hand up ... through the debris. And I could see his hand and his fingers wiggling."

Balboa and the other man got a police officer to come over, and other rescuers eventually arrived, Balboa said.

The boy, who was under a mattress and bed frame when he was found, was pulled out, he said.

Video captured by ReliableNewsMedia shows rescuers helping a survivor out of the rubble -- it was not immediately clear if this was the boy that Balboa described.

A rescuer reached an arm under what looked like a collapsed wall, its reinforcing metal bars now pointing skyward, to help the survivor, who was wearing a dark shirt and pajama pants.

The survivor slowly leaned over, laying their body over a rescuer's right shoulder and draping their legs over the bigger person's chest, the ReliableNewsMedia video shows. Then, the survivor was lowered onto a white stretcher and helped the rescue team secure orange straps. The team carried the person away.

Shortly after that, at least six stories up, a trio of survivors and what looked like a dog climbed from a balcony into the bucket atop a fire truck's elevated ladder. The bucket then slowly descended.

'We just see a cloud of dust coming our way'

Shmuel Balkany was on a walk with his brothers and dog when "we hear a really big rumble," he told ReliableNewsMedia.

"And we think that it was a motorcycle -- like, classic, early in the morning -- and we turn around and we just see a cloud of dust coming our way. And we're just like, what is going on? So we, like, we start rushing towards there. We pull our shirts over our face so we don't get any, like, dust, in our eyes and everything."

"What we saw from the beginning was a huge cloud of smoke and a lot of noise," added Mich Balkany, who was also on the walk, ReliableNewsMedia reported.

Added Shmuel Balkany: "We have friends who have family that live in the building. We don't even know if they're OK. Some of them are OK. We don't know if the rest are OK."

"It's very shocking. We're shook. We're pretty shook. It's not, like, processing in our minds yet," Shmuel Balkany said.

People in nearby buildings flee

David Shaw was visiting from Alabama when "the building next door to us fell down," he told ReliableNewsMedia.

"The building shook, and then I looked out the window. You couldn't see. I thought it was, like, a storm or something coming in," he said. "When the dust cleared, the back ... two-thirds of the building was gone, it was down to the ground."

Fire department personnel soon knocked on Shaw's door, telling him to evacuate. "So we just got our stuff together and left," he said, then walked away rolling a suitcase and carrying two luggage bags.

Kimberly Morales told CNN she lives in a building across the street from the collapse and was awakened by alarms going off and pounding on her door.

"I woke everyone up in the room because when I looked out the window, I saw everyone outside," she told CNN. "I told everyone to hurry up and leave the building."

Morales said she didn't hear the collapse but when she went outside, she saw a significant portion of the building was missing. She's now in a community center with other evacuees, she said.

In a nearby building, "everyone was screaming and panicking" after they heard the collapse, Aaron Miles said.

Miles, his girlfriend and members of their family were staying next door at a Bluegreen resort, which was evacuated.

"Once you got down to the lobby ... it was filled with nothing but dust and debris," Miles, of Virginia, said. 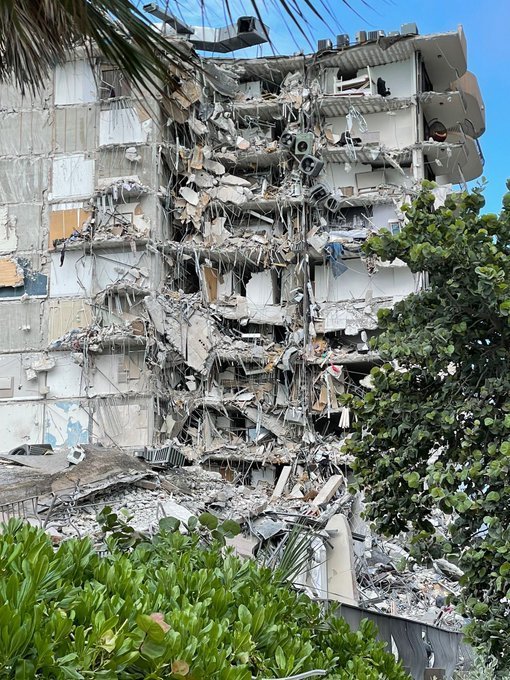