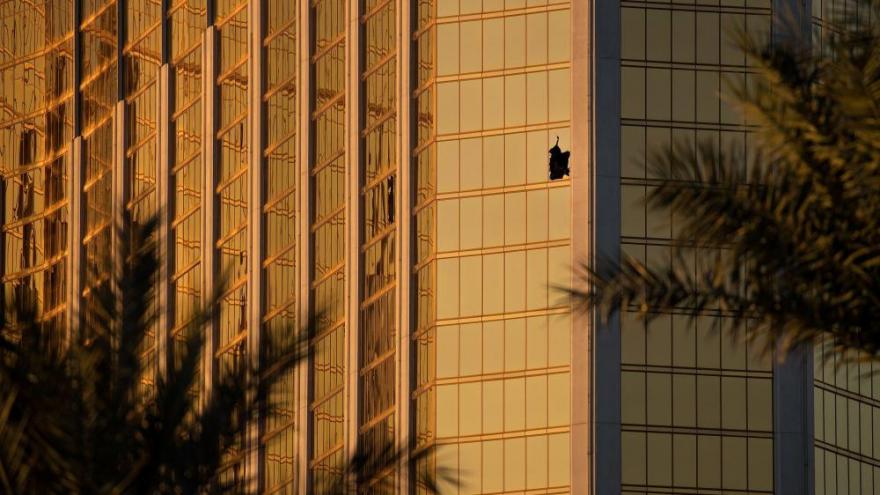 (CNN) -- MGM Resorts International and the victims of the Las Vegas mass shooting reached a landmark settlement worth between $735 million and $800 million, depending on the number of claimants, MGM said in a statement Thursday.

MGM said the settlement is not an admission of liability in the October 1, 2017, mass shooting that left 58 dead and hundreds wounded or injured. It is the worst mass shooting in modern American history.

"Our goal has always been to resolve these matters so our community and the victims and their families can move forward in the healing process," said Jim Murren, chairman and CEO of MGM Resorts. "This agreement with the Plaintiffs' Counsel is a major step, and one that we hoped for a long time would be possible.

"We have always believed that prolonged litigation around these matters is in no one's best interest. It is our sincere hope that this agreement means that scenario will be avoided," Murren added.

Robert Eglet, a lead attorney for the plaintiffs, said the agreement marks a milestone in the recovery process.

The gunman, a reclusive 64-year-old gambler, sprayed bullets on a crowd of 22,000 concertgoers from the 32nd floor of the Mandalay Bay Resort and Casino, which is owned and operated by MGM Resorts. He fired for between 10 to 15 minutes at the country music festival, killing 58 people. As many as 700 people were wounded or injured trying to escape the area.

The shooter was found dead in his hotel room with an apparently self-inflicted gunshot wound. Investigators have not been able to determine his motive in carrying out the massacre.

Police found 23 guns inside his hotel suite and discovered that he had brought more than 10 suitcases to the room over several days, authorities said. Lawsuits filed since the shooting questioned how and why the hotel did not know he was hoarding high-powered weapons and ammunition in his hotel room in the days leading up to the attack.

According to a regulatory filing released in May, MGM said it could pay as much as $800 million for lawsuits related to the mass shooting. The document noted that the company has about $751 million in insurance coverage that can be used to help cover such costs.

Chelsea Romo lost her left eye and still has shrapnel in her right eye after being shot in the head during the shooting two years ago.

"To know that something good can come from something so horrible is I guess the only thing I could ask for out of all of this," Romo said, speaking at a press conference with her attorney.

"The memories that we all have from that night... is something that we'll never be able to repair, ever," she added.

She said she tries hard to not let the aftermath from the shooting consume her children's lives.

"This is not what I want them to remember from their childhood," she said.

Tuesday morning marked two years since the shooting, and Romo was grateful when she woke up.

"I got to see my kids face and the sun after I was told that I would never see again, and I just smile," she said.

Attorney Jim Frantz, who represents nearly 200 survivors and the families of four victims, said the settlement "should be a message to all the other corporations, businesses around the country, that they step up their security."

Jason McMillan, a 37-year-old Riverside County sheriff's deputy who was shot and paralyzed, said he was glad they reached a settlement.

"The scars and injuries from that night can never be erased," he said. "I'm glad we could reach a resolution that allows us to put this nightmare behind us so our family can move forward and start focusing on the future."

Steve Melanson, whose wife Rosemarie was injured in the shooting, spoke to CNN after learning of the settlement.

Rosemarie Melanson spent 13 months in the hospital after the shooting and has had more than a dozen surgeries. Her husband said her surgeries are not over and that she has another surgery this month due to complications from being shot.

"She was shot once, but the bullet exploded inside of her, leaving her riddled with shrapnel that tore through her body. Our whole family has been on a roller-coaster that won't stop. She has another surgery scheduled this month," he told CNN. "But ultimately, we are so thankful that she is alive."

He stressed that the path to recovery will be a life-long journey for her.

"It is not over for us. She has made wonderful progress. There are so many families. Our medical bills are in the millions, (but) fortunately our insurance is good. It's covered most of it. But what about those who don't have insurance or good coverage? The settlement will hopefully offer a little closure to many who have suffered," he said.