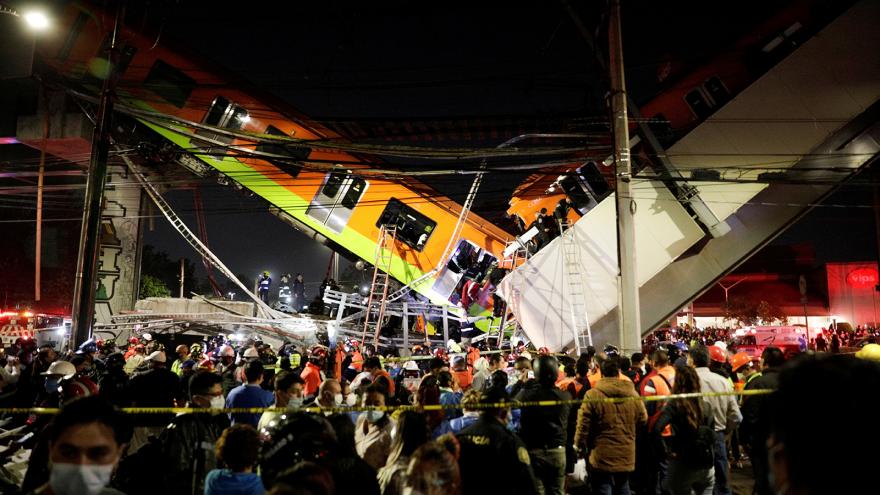 At least 79 people have been hospitalized, officials added. Of the dead, four bodies remain trapped inside the carriages that plummeted to the streets below.

The train was traveling on an elevated part of the city's rapid transit system, on the newest Line 12 -- also known as the Golden Line -- when part of the overpass collapsed onto traffic below, Mexico's Secretariat of Risk Management and Civil Protection said.

International engineering experts will be called in to help determine the cause of the collapse, which the country's foreign minister, Marcelo Ebrard, called "the most terrible accident we've ever had in the public transport system."

Mexico City Mayor Claudia Sheinbaum told a news briefing on Tuesday that alongside an investigation by the attorney general "we will hire an international company certified in metros and structural matters to conduct an external technical investigation."

Rescue efforts were temporarily suspended earlier in the night due to concerns over the stability of the subway car, which was still dangling over the road.

Mayor Sheinbaumsaid one survivor was trapped in a vehicle beneath the rubble, but had since been freed.

The city's metro system is one of the busiest in the world. Line 12, where the accident happened, opened in 2012.

"The Public Prosecutor's Office will carry out all the investigations, will make all the expert reports to find out what happened in this accident on line 12 of the subway," she added.