Meteor showers, eclipses, full moons: All of the reasons to look up in 2022 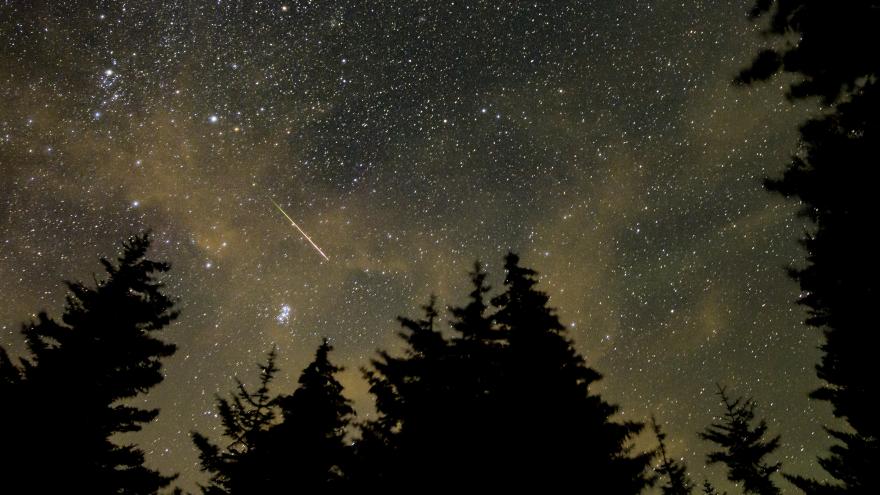 (CNN) -- Total lunar eclipses, a multitude of meteor showers and supermoons will light up the sky in 2022.

The new year is sure to be a sky-gazer's delight with plenty of celestial events on the calendar.

There is always a good chance that the International Space Station is flying overhead. And if you ever want to know what planets are visible in the morning or evening sky, check The Old Farmer's Almanac's visible planets guide.

Here are the top sky events of 2022 so you can have your binoculars and telescope ready.

There are 12 full moons in 2022, and two of them qualify as supermoons.

Definitions of a supermoon can vary, but the term generally denotes a full moon that is brighter and closer to Earth than normal and thus appears larger in the night sky.

Some astronomers say that the phenomenon occurs when the moon is within 90% of perigee -- which is its closest approach to Earth in orbit. By that definition, the full moon for June as well as the one in July will be considered supermoon events.

Here is the list of full moons for 2022, according to the Farmers' Almanac:

While these are the popularized names associated with the monthly full moon, each one carries varied significance across Native American tribes.

There will be two total lunar eclipses and two partial solar eclipses in 2022, according to The Old Farmer's Almanac.

Partial solar eclipses occur when the moon passes in front of the sun, but only blocks some of its light. Be sure to wear proper eclipse glasses to safely view solar eclipses, as the sun's light can be damaging to the eye.

A partial solar eclipse on April 30 can be seen by those in southern South America, the southeastern Pacific Ocean and the Antarctic peninsula. Another one on October 25 will be visible to those in Greenland, Iceland, Europe, northeastern Africa, the Middle East, western Asia, India and western China. Neither of the partial solar eclipses will be visible from North America.

A lunar eclipse can occur only during a full moon when the sun, Earth and moon align and the moon passes into Earth's shadow. Earth casts two shadows on the moon during the eclipse. The penumbra is the partial outer shadow, and the umbra is the full, dark shadow.

When the full moon moves into Earth's shadow, it darkens, but it won't disappear. Sunlight passing through Earth's atmosphere lights the moon in a dramatic fashion, turning it red -- which is why this is often referred to as a "blood moon."

Depending on the weather conditions in your area, it may be rusty, brick-colored or blood red.

This happens because blue light undergoes stronger atmospheric scattering, so red light will be the most dominant color highlighted as sunlight passes through our atmosphere and casts it on the moon.

A total lunar eclipse will be visible to those in Europe, Africa, South America and North America (excepting northwestern regions) between 9:31 p.m. ET on May 15 and 2:52 a.m. ET on May 16.

Another total lunar eclipse will also be on display for those in Asia, Australia, the Pacific, South America and North America on November 8 between 3:01 a.m. ET and 8:58 a.m. ET -- but the moon will be setting for those in eastern regions of North America.

The new year kicks off with the Quadrantid meteor shower, which peaks during the first week of January.

It's the first of 12 meteor showers throughout the year -- although the next one, the Lyrid meteor shower, doesn't peak until April.

Here are the other showers to watch for in 2022:

If you live in an urban area, you may want to drive to a place that isn't littered with city lights that will obstruct your view. If you're able to find an area unaffected by light pollution, meteors could be visible every couple of minutes from late evening until dawn.

Find an open area with a wide view of the sky. Make sure you have a chair or blanket so you can look straight up. And give your eyes about 20 to 30 minutes to adjust to the darkness -- without looking at your phone -- so the meteors will be easier to spot.