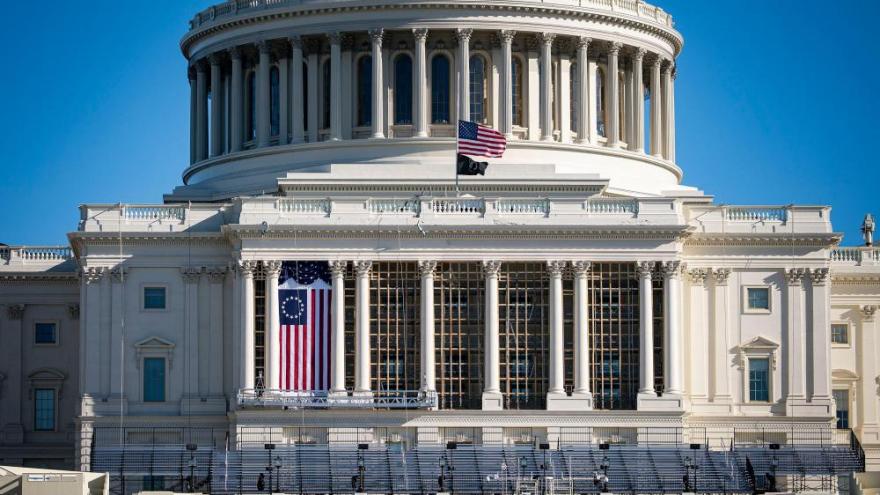 The American flag flies at half-staff as inauguration construction continues on the West Front of the U.S. Capitol on January 9, 2021 in Washington, DC.

(CNN) -- Members of Congress and staffers will have to walk through metal detectors in order to get onto the floor of the US House of Representatives, a senior Democratic aide told CNN Tuesday.

The development comes after multiple House Democrats told CNN they are worried about some of their Republican colleagues and that there have been multiple conversations about the need for every member of Congress and their guests to start going through metal detectors.

Capitol Police had set up metal detectors outside of the House floor as of Tuesday afternoon and all House members, staffers and aides will have to go through them, the aide said. A US Capitol Police source confirmed the measures are in place.

Acting House Sergeant-at-Arms Timothy Blodgett said in a memo to all members of Congress and their staffs that the metal detectors were being installed to ensure compliance with police regulations banning guns and incendiary devices from the chamber.

Members are reminded that pursuant to the firearms regulations that Members received on opening day, firearms are restricted to a Member's Office," the memo stated. "Thank you in advance for your (cooperation) with the United States Capitol Police and Sergeant at Arms staff during the screening process."

The House Democrats told CNN that they are worried some lawmakers are ignoring House rules regarding firearms.

"There have been increasing tensions with certain incoming freshmen for months, who have been insistent on bringing firearms in violation of law and guidelines," one House Democrat said, in a reference to Republican Reps. Lauren Boebert of Colorado, Madison Cawthorn of North Carolina and others.

Boebert was filmed in a campaign advertisement vowing to carry her Glock handgun around Capitol Hill in Washington, DC. and has said she would carry her gun to Congress. The District has strict gun laws and Washington's police chief has warned the congresswoman that she is subject to the same laws as everyone else in the nation's capital.

Cawthorn, meanwhile, said in an interview with Smoky Mountain News last week that he was armed when a mob stormed the Capitol.

"Fortunately, I was armed, so we would have been able to protect ourselves," Cawthorn told the paper.

Micah Bock, communications director for Cawthorn, said the congressman will follow the guidance of Capitol Police.

"Rep. Cawthorn exercises his 2nd Amendment rights, as well as the privileges available to members of Congress," Boch said in a statement to CNN. "Congressman Cawthorn seeks to follow the guidance of Capitol police and is immensely grateful for the work that they do."

Boebert, in a statement to CNN, called the installation of the metal detectors a "political stunt."

"It is a shame that Nancy Pelosi is trying to disarm Members of Congress in the very place that needed more protection on January 6th. It is clear metal detectors would not have deterred the violent acts we saw; this political stunt does nothing to improve the safety of Members in the Capitol complex," the statement read.

She added, "As I have said in previous statements, I will comply with all applicable firearm laws and regulations. I want to again thank the brave men and women of the Capitol Police for their service and for keeping us safe."

When members went to the floor for votes Tuesday night, multiple Republicans were furious at the new measures and some shouted at Capitol Police officers who were at the metal detectors.

Reps. Markwayne Mullin and Steve Womack erupted at Capitol Police as they were forced to go through, with Womack shouting, "I was physically restrained," and Mullin saying, "It's my constitutional right" and "they cannot stop me."

Boebert set off the metal detectors and initially refused to show police what was in her bag. She was eventually allowed into the chamber.

There were long lines at the checkpoint and Capitol Police waved approximately eight lawmakers through to the floor without making them go through the metal detectors at one point.

GOP Rep. Rodney Davis, the ranking member of the House administration committee, told CNN in a statement that the metal detectors are evidence of "political correctness run amok. The threat is outside, not inside. Every resource used inside is one that can't be used outside."

Rep. Steve Scalise, the No. 2 Republican, told CNN that the situation is "untenable" because it "impedes the ability of members to come and vote. This is our job."

According to the US Capitol Police's website, firearms are prohibited on the Capitol grounds even if someone has a carry permit from Washington, DC or another state. Law enforcement officers who are performing their official duties and meet "certain established criteria" may be allowed to carry their weapon into the Capitol.

The Washington Post reported in 2018 that guns are completely banned in the legislative chambers, with an exception for the chambers' sergeants-at-arms.

A second Democratic member of Congress told CNN that the concern extends to the people those members of Congress may invite to President-elect Joe Biden's inauguration.

"There are concerns about the gun-toting members, but also we don't know who they're going to bring to the inauguration who can bypass the metal detectors," the second House Democrat said. "Until there's an investigation and until we understand our colleagues' level of complicity in the attack we don't know how involved they really were. Until we have answers I don't think we should trust them -- not all of them of course, but some of them."

The second Democrat noted that some of the House Republicans went onto the chamber's floor after the attack and continued to share election lies. That Democrat added that some refused to wear masks while they were sheltering in place and now at least three Democrats have tested positive for Covid-19.

This story has been updated with comments from Rep. Cawthorn's office and Rep. Boebert, along with additional color from the Capitol on Tuesday.