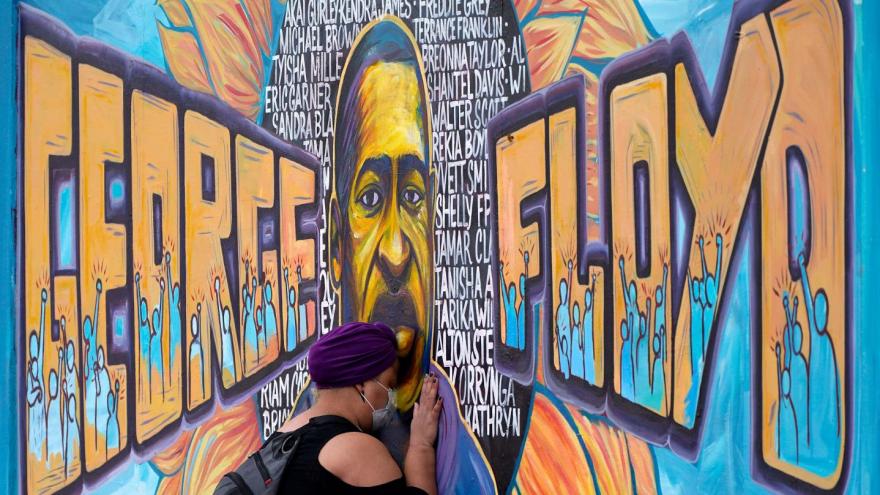 (CNN) -- As the nation honored the life of George Floyd with memorial events and marches, Floyd's family and supporters said they have been encouraged by the progress made in the year since he was murdered by a Minneapolis police officer.

From Dallas to Washington, DC, to Minneapolis, Floyd's name is echoing across the country in recognition of a man who has become a symbol in the fight for racial equality and police reform.

"Today I just felt a day of relief," Floyd's aunt Angela Harrelson told CNN. "The support that we have received, the love to get to this day. I am just overwhelmed with joy and hope and I feel like change is here."

Darnella Frazier, the woman who recorded the video of Floyd's murder, told CNN Tuesday that she didn't know Floyd "from a can of paint, but I knew his life mattered."

Philonise Floyd, said the meeting with Biden and Harris was "great," calling President Biden a "genuine guy" who always speaks from the heart.

"It's a pleasure just to be able to have the chance to meet with them when he we had that opportunity too. We're just thankful for what's going on and we just want this (George Floyd Justice in Policing Act) to be passed in the future," Philonise Floyd told reporters after the Oval Office meeting concluded.

Biden released a statement saying the Floyd family has shown "extraordinary courage" over the last year.

"Although it has been one year since their beloved brother and father was murdered, for the family -- for any family experiencing a profound loss -- the first year can still feel like they got the news a few seconds ago," Biden wrote. "And they've had to relive that pain and grief each and every time those horrific 9 minutes and 29 seconds have been replayed."

The family visit comes as the George Floyd Justice in Policing Act remains stalled in the Senate, despite Biden setting an initial goal of having the legislation passed by Tuesday. Press secretary Jen Psaki said Friday that Biden wants the bill on his desk "as quickly as possible."

The bill includes provisions to set up a national registry of police misconduct, a ban on racial and religious profiling by law enforcement and an overhaul of qualified immunity for police officers.

L. Chris Stewart, co-lead counsel for the Floyd family, told CNN's Wolf Blitzer Tuesday that he believes the bill will be passed.

"I know everyone is fighting about qualified immunity, but we also have to make sure we care about the provisions that stop Black people from being killed in this bill before fighting over how to sue a cop," Stewart said, adding that both Democrats and Republicans know the bill has to become law.

"Not only are you protecting African Americans who are being brutalized out there, but you are protecting good officers that are out there doing their job," he said. "The bill protects everybody."

Floyd's nephew, Brandon Williams, said Biden told the family he wants to see the bill passed, but he wants to make sure it's not a rushed bill.

"He showed concern, and I think genuinely he wanted to know exactly how we were doing and what he could do to support us, and he did let us know that he supports passing the bill, but he wants to make sure it's the right bill, and not a rushed bill," Williams said, adding that the President is not happy that legislation wasn't passed by Tuesday.

Cedric Richmond, Biden senior adviser, told CNN it's more important to have meaningful legislation than to meet a deadline or timeline.

"This country should be united behind police reform," he said on Tuesday. "This is not anti-police, this is just pro-people, pro-policing."

"Those calls for action spread across the world as his memory sparked a global movement," Walz said in a statement. "George Floyd didn't ask to be an international symbol of the pain that Black Americans have faced for generations, and yet, in the words of his daughter, he changed the world."

Memorials and events honor Floyd across US

The NAACP kicked off Tuesday by holding a moment of silence for Floyd at 9:29 a.m. on its Facebook page to mark the 9 minutes and 29 seconds Derek Chauvin knelt on Floyd's neck.

Shareeduh Tate, Floyd's cousin and president of the George Floyd Memorial Foundation, told CNN on Tuesday that the family feels uplifted by the racial reckoning, the conviction of Chauvin, and the federal indictment of the Chauvin and the other three officers involved in Floyd's death.

Tate said that while she had wanted to see the George Floyd Justice in Policing Act passed by Tuesday, the family would rather wait until Congress can pass a substantive bill that includes every provision. "From my perspective, when we lost him, it was a very personal thing for us initially and we had no idea the kind of impact it would have," Tate told CNN's Poppy Harlow and Jim Sciutto.

Members of Floyd's family were also expected to attend memorial events in Minneapolis on Tuesday, according to a family spokesman. One of those events is a "Celebration of Life" which includes a day of games, food, inflatable attractions for youth and special performances by Grammy Award-winning artists and local talent.

Minneapolis was also responding to violence on Tuesday with reports of gunfire near the place where Floyd died, now known as George Floyd Square. One person has been hospitalized with a gunshot wound. The shooting happened about 3.5 miles away from the park where the "Celebration of Life" is being held.

Elsewhere, activists in Dallas organized a solidarity march and rally on Tuesday and the California-based Pacific Symphony is streaming a free concert in honor of Floyd.

Several other events honoring Floyd have been held in recent days. Bridgett Floyd spoke during a rally Sunday in Minneapolis where she vowed to be a voice for George Floyd and advocate for change. She was joined by civil rights attorney Ben Crump and Rev. Al Sharpton.

"It has been a long year. It has been a painful year," Bridgett Floyd told the crowd on Sunday. "It has been very frustrating for me and my family. For your life to change within a blink of an eye. I still don't know why."

The George Floyd Memorial Foundation is also asking supporters to honor the anniversary of Floyd's death by joining its mission to end systemic violence against Black Americans.

The foundation urged supporters to use Tuesday to call their elected officials -- particularly their senators -- and demand that they pass the George Floyd Justice in Policing Act; register to vote; help promote the foundation's work on social media and donate to the foundation's programs that support the Black community.