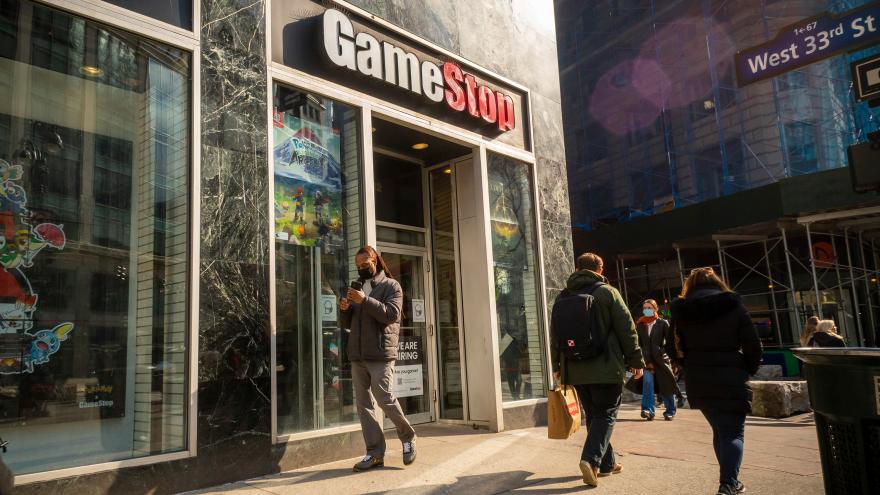 (CNN) -- Apes of Reddit, rejoice! Shares of meme stock darling GameStop soared 10% Thursday, prompting trades to be halted several times due to volatility. But there was no specific news to justify or explain the big pop.

Other meme stocks, including AMC, Bed Bath & Beyond and Beyond Meat also roared higher Thursday. AMC jumped nearly 10%, a much bigger gain than rival movie theater stocks Cinemark and IMAX.

Bed Bath & Beyond was up about 2%. Beyond Meat plunged 20% at the opening bell following weak earnings results, but the plant-based food giant reversed course and was briefly higher. It ended the day down just 4%.

Most of these stocks, favorites of traders on Reddit and other social media platforms, pared their early gains as the day wore on, and all have plunged overall this year along with the broader market. GameStop is still down about 40% in 2022 despite Thursday's pop, while AMC has fallen nearly 60% in the same time frame.

Yet many fans of these companies have remained faithful to the stocks. And there now are several ETFs devoted to meme stocks, such as the Roundhill MEME, FOMO (for fear of missing out) and VanEck Social Sentiment funds.

AMC, in particular, has a fervent base of supporters, who often use hashtags on Twitter like #AMCNEVERLEAVING and #AMCtothemoon to tout the stock. But some investors have been betting against AMC due to concerns that the company has been taking on too many risks of late.

The theater chain now plans to sell AMC-branded popcorn outside of theaters. It has also made moves into cryptocurrencies and even an investment into a precious metals mine.

One possible reason that AMC, GameStop and other meme stocks are rallying? They may be getting a lift from what's known as a short squeeze.

Many short sellers — investors who borrow shares and sell them in hopes of buying them back at a lower price — are betting big against these meme stocks.

It's a very risky strategy, though. If a shorted stock goes up from the price the short seller purchased it, the investor can lose a lot of money.

As heavily shorted stocks climb, short sellers may be forced to quickly cover their positions by buying back the stock to avoid even bigger losses. This short covering can feed on itself, leading to a "squeeze" that pushes the stock price higher and higher.

Investors in AMC and other meme stocks even have an acronym to describe this phenomenon: MOASS, which stands for Mother of All Short Squeezes.

Some would argue that short squeezes aren't a good reason for a stock to climb because they have little to do with a company's fundamentals, such as sales and earnings.

But others note that individual investors should be able to fight back against larger institutional firms and hedge funds that may be unfairly targeting a stock and shorting it.

"Fair markets are free markets," Ryan Cohen, the Chewy co-founder who is now chairman of GameStop and its top shareholder, tweeted on Thursday. Cohen's RC Ventures also has a large stake in Bed Bath & Beyond.