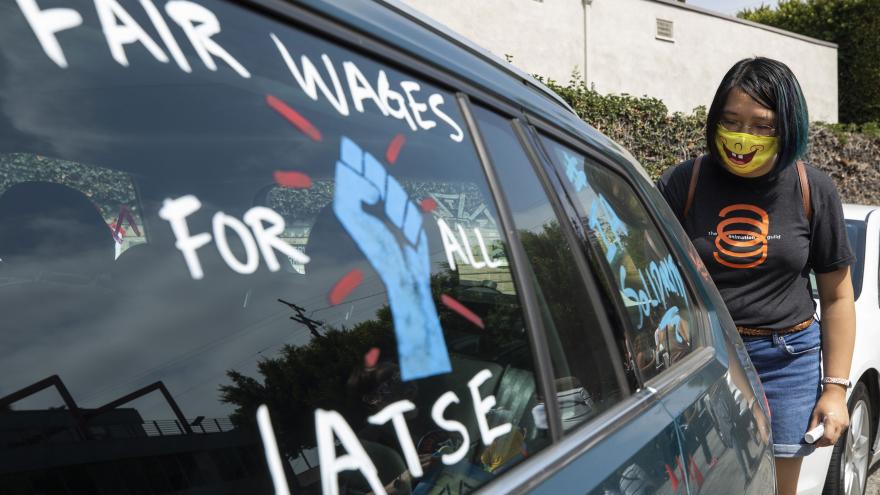 (CNN) -- Members of the union representing roughly 60,000 film and television workers have voted to authorize a strike that could shutter Hollywood productions indefinitely.

"The members have spoken loud and clear," said Loeb. "This vote is about the quality of life as well as the health and safety of those who work in the film and television industry. Our people have basic human needs like time for meal breaks, adequate sleep, and a weekend. For those at the bottom of the pay scale, they deserve nothing less than a living wage."

The union said the results were made "by a nearly unanimous margin," with nearly 90% voter turnout. This is the first time in IATSE's 128-year history that members of the union have authorized a nationwide strike, according to IATSE.

The union had been in negotiations with the group representing producers, the Alliance of Motion Picture Television Producers (AMPTP), making a case for higher pay, improvements to on-set conditions (including longer rest and meal breaks) and larger contributions to health and pension benefits. Those talks were halted last week after the groups could not come to an agreement.

"The AMPTP remains committed to reaching an agreement that will keep the industry working," the group said in a statement. "We deeply value our IATSE crew members and are committed to working with them to avoid shutting down the industry at such a pivotal time, particularly since the industry is still recovering from the economic fallout from the COVID-19 pandemic."

It added: "A deal can be made at the bargaining table, but it will require both parties working together in good faith with a willingness to compromise and to explore new solutions to resolve the open issues."

IATSE is expected to return to negotiations but said it will do so hoping the studios "will see and understand the resolve of our members," Loeb said.

"The ball is in their court. If they want to avoid a strike, they will return to the bargaining table and make us a reasonable offer," he said.

When asked by the Los Angeles Times prior to the vote how likely it was that the union would go on strike, Loeb said, "That depends largely on the employers and what they're prepared to do to avoid it."

"They've made it about power, not reason, so my read is that if they see that the strike authorization is passed, then maybe they will return to reason and the bargaining table," he said. "But if it's about power, that's a problem."

If negotiators are not able to reach an agreement and the strike moves forward, it will shut down production nationwide. The last major Hollywood strike was in 2007 after the Writers Guild of America failed to reach a agreement with AMPTP. It impacted everything from movie productions and TV series to late-night shows and lasted 100 days.