Members of both parties see impeachment as a political winner in 2020, new Iowa poll finds 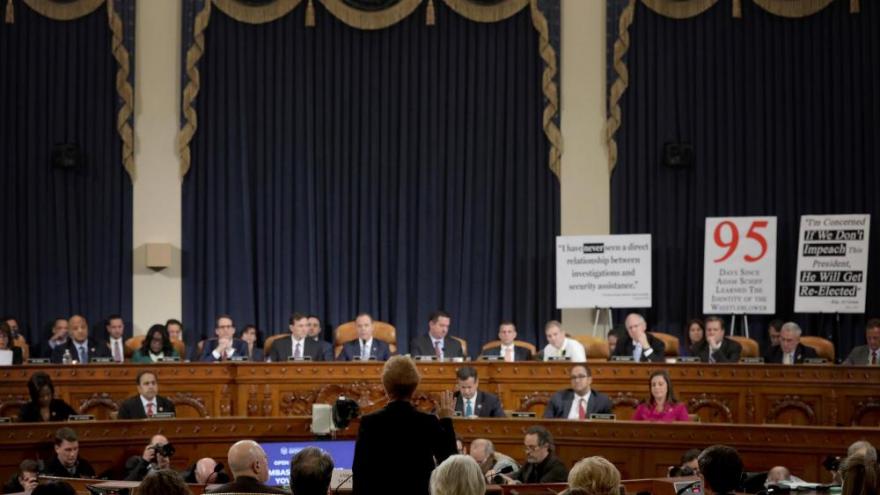 As impeachment hearings play out on Capitol Hill, Iowans on both sides of the political spectrum see the inquiry as a boost to their party's chances of winning the general election next November, according to a new CNN/Des Moines Register/Mediacom poll.

(CNN) -- As impeachment hearings play out on Capitol Hill, Iowans on both sides of the political spectrum see the inquiry as a boost to their party's chances of winning the general election next November, according to a new CNN/Des Moines Register/Mediacom poll.

That sentiment is stronger among registered Republicans who do not plan to attend the Democratic caucuses, with 60% saying the impeachment inquiry is more likely to make it easier than harder (26%) for President Donald Trump to win re-election. Among likely Democratic caucusgoers, 45% say the inquiry would make it easier for the Democratic nominee to win in 2020 compared to 24% who believe it will make it harder. The share of those who say they are not sure what impact the inquiry will have is roughly the same across both voter groups.

The findings come on the heels of the first week of public testimony in the inquiry with another eight witnesses slated to testify in open hearings this week. The poll was largely conducted before public hearings began.

An overwhelming majority of these registered Republicans (72%) say the President did not use his office improperly to gain a political advantage against a potential 2020 opponent. Just 14% think he did -- but nearly half of those who say they would consider or definitely vote for someone other than the President in the general election (47%) say he used his office improperly.

The President's standing among this group of Iowa Republicans is as strong as ever, with 85% approving of his job performance, gaining four points since March. Separately, 83% say they have a favorable view of Trump. Views of the President are roughly even across different age groups, but there is a gender divide, with more men (88%) holding a more favorable view of Trump than women (79%).

As strong as the President's job performance rates with Republicans, they like his handling of the economy even more -- with 89% voicing approval. He also receives high marks on his handling of immigration (76%), trade with China (75%) and foreign policy (74%). One weaker spot for Trump is ethanol, with a slight majority (53%) approving of his handling of that issue.

Vice President Mike Pence is as popular among these Republicans as the President, with 82% saying they have a favorable view of him.

A pair of the President's primary opponents, former Gov. Bill Weld and former Rep. Joe Walsh, receive more negative than positive marks, though both are largely unknown among these Republicans. Walsh's favorable rating is 8% compared to 12% unfavorable. It's 4% favorable and 11% unfavorable for Weld.

Overall, 76% say they definitely plan to vote to re-elect the President, up nine percentage points since March, with clear majorities across nearly every demographic group. The only exception is moderates, with 47% saying they plan to vote for Trump.

These registered Republicans are also optimistic about Trump's chances against the top four Democratic challengers with clear majorities saying they think the President is almost certain to win each potential matchup. Confidence is highest about defeating Bernie Sanders, with 62% saying they are almost certain the President will defeat the Vermont senator. That's compared to 59% who say that about Massachusetts Sen. Elizabeth Warren, 58% for former Vice President Joe Biden and 56% for South Bend, Indiana, Mayor Pete Buttigieg.

There is slightly more uncertainty among registered Republicans about the outcome of a potential Trump -- Buttigieg matchup, with 15% saying they are not sure what would happen in such a contest. For the other three Democrats tested that number is in the single-digits.

There is about an even split on the question of whether Iowa registered Republicans feel more allegiance to the GOP or Trump, with 43% choosing the Republican Party and 41% naming the President.

The groups with the strongest allegiance to Trump include those who call themselves very conservative (52% side with Trump versus 34% who side with the party), evangelicals (46% to 41%) and those who live in rural areas (47% to 37%).

While some states look to cancel nominating contests to benefit Trump, nearly three-in-four of these Republicans (72%) approve of the Iowa GOP's decision to hold a caucus with a vote for a nominee in 2020. However, interest is fairly low, with just 30% of registered Republicans saying they will definitely or probably attend the GOP caucuses.

The CNN/Des Moines Register/Mediacom poll was conducted by Selzer & Co. of Des Moines, Iowa, November 8 through 13 among a random sample of 500 likely Democratic caucusgoers and 502 registered Republicans not planning to participate in the Democratic caucuses reached on landlines or cell phones by a live interviewer. Results for the full samples of likely caucusgoers and of registered Republicans each have a margin of sampling error of plus or minus 4.4 percentage points.