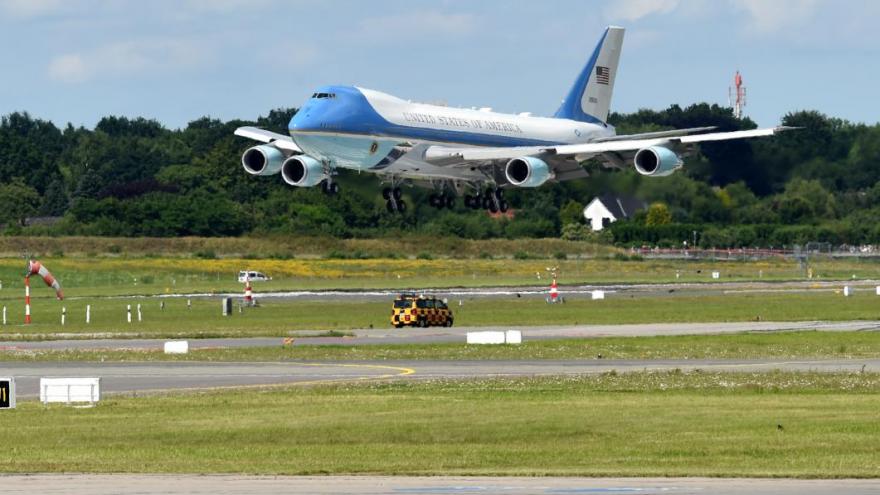 President Donald Trump arrives with Airforce One at the airport in Hamburg, northern Germany on July 6, 2017 to attend the G20 meeting. Donald Trump arrived for high-stakes visit to Europe on July 5, landing in Poland ahead of his first G20 summit in Hamburg and a closely -watched meeting with Russian President Vladimir Putin.

Miller is now the second White House staff member known to have tested positive for the coronavirus this week, after CNN reported Thursday that one of Trump's personal valets had tested positive earlier in the week.

"She's a wonderful young woman, Katie, she tested very good for a long period of time and then all of a sudden today she tested positive," Trump said during a meeting with Republican members of Congress at the White House.

The President said that Miller has not come into contact with him but noted that she has been in contact with Pence.

Miller was frequently in contact with members of the press, and the White House is now making more coronavirus testing available to journalists, a White House official told CNN's Jim Acosta.

The announcement came following an hour-long delay to Pence's Friday morning flight to Iowa, when individuals were seen exiting Air Force Two before the plane lifted off of the tarmac at Joint Base Andrews just outside Washington.

A senior administration official told the press pool aboard Air Force Two that a Pence staffer, who they did not name at the time, tested negative for the coronavirus Thursday and positive Friday morning. Katie Miller, who was not on the plane, had possibly been in contact with six people scheduled to fly on the trip, and they were removed before takeoff, according to a senior administration official.

The pool was told later Friday afternoon that everyone who deplaned had been tested for the coronavirus and had tested negative.

Katie Miller addressed the news of her testing positive in a tweet Friday evening, thanking supporters and indicating that she was in good condition.

"Thank you all for your prayers and well wishes," she wrote. "I'm doing well and look forward to getting back to work for the American people."

The news of Katie Miller's positive test has left everyone in the West Wing of the White House genuinely nervous, one White House source told CNN. The source said Katie Miller's nature is to communicate in person so she makes lots of in-person contacts during her day-to-day work. The source added that West Wing staffers are concerned because her husband also works in the building and has been inevitably exposed.

The White House is now making sure staffers wear masks in the White House residence, and coronavirus tests and temperature checks are being boosted throughout the West Wing. The West Wing is also being sanitized on a more frequent basis, which the official said is "not perfect" but the White House wants to be an example to businesses around the country on how to deal with the virus.

The vice president, who leads the White House coronavirus task force, traveled to Des Moines, Iowa, to participate in a discussion with faith leaders on responsible religious and spiritual gatherings, followed by a roundtable on securing the food supply.

Agriculture Secretary Sonny Perdue, as well as Iowa Republican Sen. Chuck Grassley and Joni Ernst were also on Air Force Two with Pence for the trip.

About 10 members of Pence's staff are tested daily, the senior administration official told the press pool, adding that "the vice president and the President have not had contact with this person recently."

On Thursday, CNN reported that a member of the US Navy who serves as one of Trump's personal valets tested positive for the coronavirus.

The valets are members of an elite military unit dedicated to the White House who often work very close to the President and first family, assisting them with a variety of personal tasks. They are responsible for the President's food and beverage not only in the West Wing but they also travel with him when he's on the road or out of the country.

Trump was upset when he was informed Wednesday that the valet had tested positive, a source told CNN, and the President was subsequently tested again by the White House physician.

The President also said he'd had "very little personal contact" with the man.

Following the news of the valet's illness, Trump said he would be tested for the coronavirus daily. Pence, White House staff and individuals who come in contact with the President will be tested daily, too.

Trump said before traveling aboard Air Force One earlier this week that he was not concerned about being in close quarters with other people since those around him are regularly tested.

But a negative test and lack of symptoms are not sure signs that someone can't spread the virus.

During a recent trip to the Mayo Clinic, Pence did not wear a face mask, despite being told about the clinic's policy saying they're required. Pence told reporters that he wasn't wearing a mask because he's often tested for coronavirus. But a few days later, Pence said he should have worn a mask.

Trump also declined to wear a mask this week during portions of his tour of a mask-making facility in Arizona.

CORRECTION: This story has been updated to correct the timing of when one of Trump's personal valets tested positive for coronavirus.