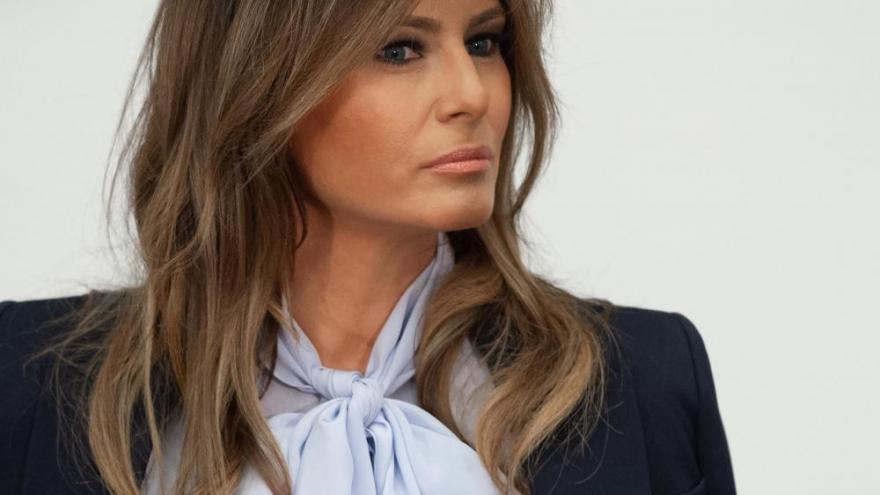 US First Lady Melania Trump toured the United States National Archives, specifically to view the Emancipation Proclamation and the Charters of Freedom, which include the Declaration of Independence, the Constitution and the Bill of Rights.

(CNN) -- In a previously unannounced visit Thursday afternoon, first lady Melania Trump toured the United States National Archives, specifically to view the Emancipation Proclamation and the Charters of Freedom, which include the Declaration of Independence, the Constitution and the Bill of Rights.

The first lady was accompanied by Housing and Urban Development Secretary Ben Carson, according to a release from Trump's office.

"During our country's long march towards freedom, the Emancipation Proclamation and the Charters of Freedom continue to reaffirm our country's democratic ideals and the values that have inspired me and all Americans to this day," Trump said in a statement.

The first lady's office did not return a request for a comment on Thursday's visit or how it came about.

On Juneteeth, a day after her visit to the archives, Trump tweeted and released a video to pay tribute to the holiday which is the oldest regular US celebration of the end of slavery. It commemorates June 19, 1865: the day that Union Army Maj. Gen. Gordon Granger rode into Galveston, Texas, and told a group of enslaved African Americans that the Civil War had ended and they had been freed. That event took place more than two years after President Abraham Lincoln signed the Emancipation Proclamation. In the video, Trump reads a children's story about history of the date and talks about her trip to Ghana and visit to the House of Slaves and the Door of No Return.

Trump, who was born in Slovenia, at the time part of Communist Yugoslavia, is only the second immigrant first lady in the United States. She became an American citizen in 2006. Carson is the only black member of President Donald Trump's Cabinet, and one of few African Americans in the entire administration. Thursday's event is the first that the first lady and Carson have participated in with just the two of them.

As part of a private tour of the Archives, conducted by Archivist of the United States David Ferriero, Trump and Carson also viewed General Order Number 3, the proclamation announced on June 19, 1865, which marked the official end of slavery. According to the release from Trump's office, "the document was particularly relevant given its significance to Juneteenth, the annual day of commemoration to celebrate and mark the end of slavery."

The decision by Trump to make a publicly unscheduled visit to view these historic documents comes on the same day the Wall Street Journal published a story based on an interview with the President in which he said he made Juneteenth "very famous" after first scheduling an Oklahoma rally for that day. He later rescheduled it for June 20.

"It's actually an important event, an important time. But nobody had ever heard of it," President Trump told the Wall Street Journal. Juneteenth is actually the oldest regular US celebration of the end of slavery. It commemorates June 19, 1865: the day that Union Army Maj. Gen. Gordon Granger rode into Galveston, Texas, and told slaves of their emancipation, nearly two and a half years after Abraham Lincoln delivered the Emancipation Proclamation. Trump, in the same interview, said he had learned the meaning of Juneteenth after asking a black United States Secret Service agent.

"The National Archives is a treasured sanctuary for the written word and a monument to the principles of liberty, justice and equality for all," Melania Trump said in her statement.

The first lady has often acted, either via social media messaging or actions, in a way that appears to counter her husband's statements or stances. In recent weeks, she has posted on social media calling for "peace" and "healing" for a country coming to terms with a cultural and social reckoning after decades of racial disparities. The President, on the other hand, has tweeted often about "law & order" and told governors they needed to "dominate" protesters. His tweet earlier this month that "when the looting starts, the shooting starts" was flagged by Twitter for glorifying violence.