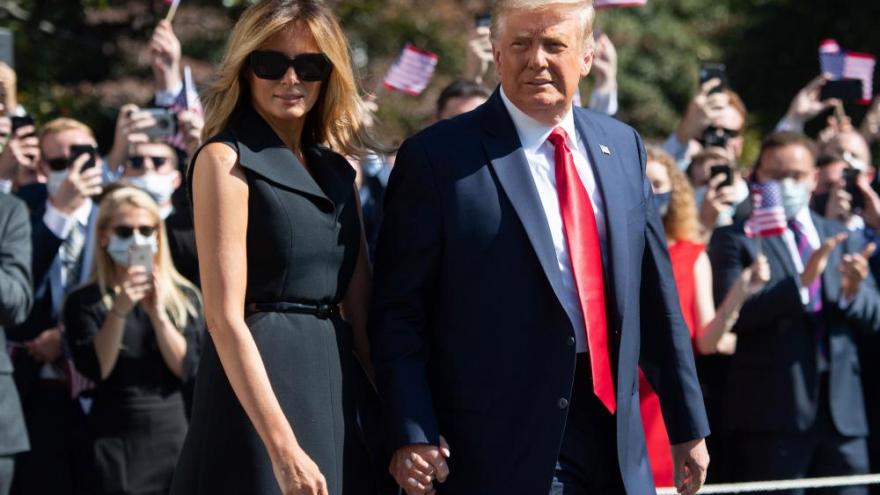 (CNN) -- First lady Melania Trump will make her first solo campaign appearance on behalf of President Donald Trump with just one week to go before the election. Her up-to-now campaign trail absence has marked a historic break from precedent, especially in a race that finds her husband fighting for votes.

The first lady is scheduled to speak at a Make America Great event Tuesday afternoon in Atglen, Pennsylvania, according to a campaign source.

Every modern first lady to hold the position before Melania Trump has proved an important and impactful surrogate on behalf of their husbands. The President is particularly hunting votes from suburban White woman, a group with which the first lady may hold some appeal.

Melania Trump has largely proven herself a homebody without a taste for campaigning or giving political speeches, according to several sources. Her last appearance at a Trump campaign rally was June 2019, where she made brief remarks at the kickoff for her husband's reelection efforts. Her last solo speaking event in support of Trump's campaign was almost exactly four years ago, also in Pennsylvania, just days before the election.

Trump won the state by a slim margin over Hillary Clinton in 2016. A CNN poll released last week showed Democratic rival Joe Biden ahead of Trump this time around, with 53% of likely voters behind him and 43% backing Trump.

Melania Trump's unwillingness to campaign or attend fundraisers has been an at times frustrating concept for members of the Trump campaign to swallow, according to two campaign sources, as having a first lady speak to voters is historically the most compelling and effective mode of surrogacy.

"It is certainly not a question of 'Does the Trump campaign want Melania Trump to make appearances?' " a source familiar with campaign operations said. "She's wanted and needed. It's just that she doesn't do them."

Earlier this fall, when asked when the first lady would make campaign appearances, campaign spokesman Hogan Gidley said: "The first lady is an incredible asset to the country, the President and the campaign. We're communicating with the first lady's team to determine the best ways she can be involved moving forward."

This is the only event to have materialize, after the first lady skipped a planned appearance at a Trump rally in Pennsylvania last week, citing her Covid recovery.

The first lady's absence has been a point of discussion among some in campaign circles, however, the lack of participation is not particularly of concern for the President himself, according to someone familiar with how he has responded.

"He knows her well enough to know that when she doesn't want to do something, it's not like he or anyone else is going to change her mind," the source said.

In 2016, the pleas for Melania Trump's participation on the trail were just as consistent. Back then, she said her priority was caring for her then-10-year-old son. Trump was ostensibly given a pass as to why she did not make prolific speeches or headline fundraisers.

The occasional wave or brief greeting to throngs at a Trump rally became satisfactory for a campaign struggling to help voters understand who exactly their candidate was behind the scenes, something a spouse can deliver on during an election cycle.

"The answer to us asking her to make appearances was 'no' so many times, we eventually just stopped asking," says someone who worked in a senior position on the 2016 Trump campaign. 2020 doesn't appear to be all that different. "Anyone would take her, anytime. She's a rock star," says a source familiar with campaign strategy.